The British Library holds a world-class collection of Jane Austen material. The Library’s manuscript materials include, for instance, a collection of comments about Mansfield Park by family, friends and acquaintances compiled by Austen soon after publication. The Library possesses at least one copy of each of the first English printed editions of her work, and also holds the first full French translations of Sense and Sensibility (1815), Mansfield Park (1816), Pride and Prejudice (1822), and Northanger Abbey (1824), as well as the first translation into German of Persuasion (1822).

Both Pride and Prejudice and Mansfield Park were first translated into French in a much abridged form in four instalments in the Swiss periodical Bibliothèque britannique (1813, 1815). (Unfortunately, the Library’s copy of this periodical, which disseminated British culture in continental Europe during the Napoleonic wars, was destroyed by bombing during the Second World War.) By 1824, all of six of Austen’s major novels were available in French.

There are no known French reviews of these early translations, but the translators’ prefaces to the novels, the way in which they were translated and the changes that were made to the text can provide a great deal of information about the tastes and expectations of her readership and the reception of her novels in France and Switzerland in the early 19th century. 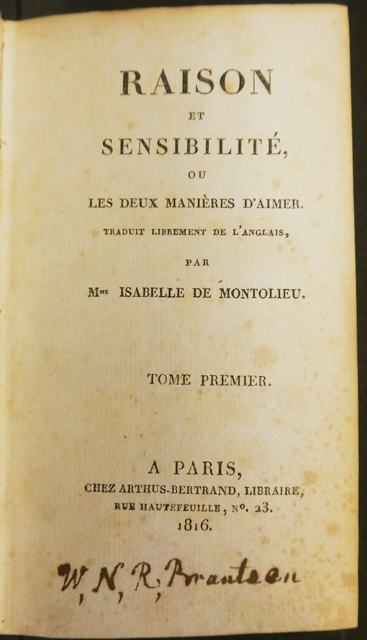 In 1815, Isabelle de Montolieu, a well-known and successful Swiss novelist, published her ‘free translation’ of Sense and Sensibility as Raison et Sensibilité ou les Deux Manières d’aimer. The Library’s copy includes the translator’s preface: Montolieu expresses her preference for this ‘new genre’ of English novel which has superseded that of ‘terreur’ and is confident that her French readers will enjoy a bit of ‘light literature’, ‘devoid of any political allusions’ after the troubled times they have lived through. 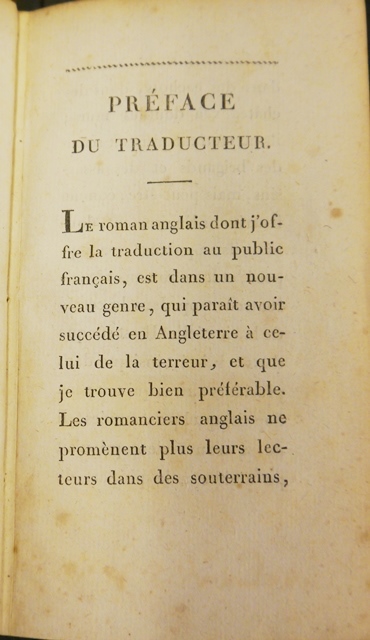 The opening of Montolieu’s preface to Raison et Sensibilité

She presents her translation as ‘reasonably faithful until the end, where I have allowed myself, as is my custom, a few slight changes which I have deemed necessary’. She changes some forenames: Elinor Dashwood remains Elinor, but her sisters Marianne and Margaret become Maria and Emma. She alters and moralises the ending: Marianne rejects the reprobate Willoughby, now a widower, and he, seeing the error of his ways, marries Caroline (Eliza in the original) whom he had earlier seduced and abandoned. Madame Smith, who has taken in Caroline, is ‘delighted to save a soul from eternal damnation’. Montolieu, catering for a readership still in thrall to Jean-Jacques Rousseau’s Nouvelle Héloïse, produced a didactic and sentimental version of Austen’s novel. At this time, too, her fame far eclipsed Austen’s and so it’s no surprise that the publisher reissued this translation in 1828, with added illustrations, in an edition of Montolieu’s works . 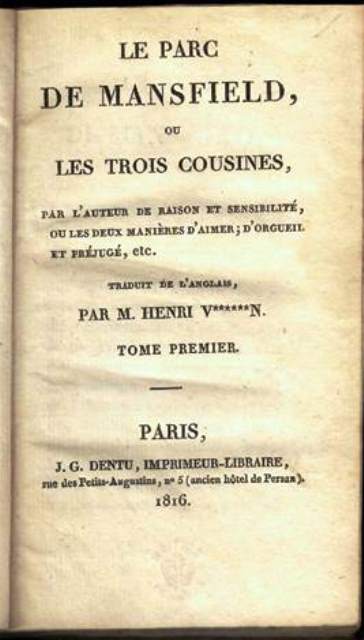 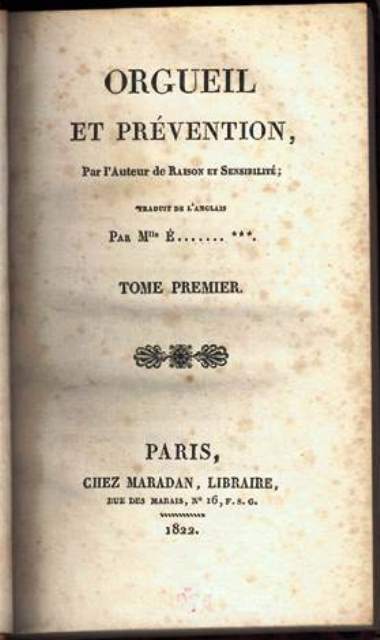 The Library holds one of the two early French translations of Pride and Prejudice, Orgueil et Prévention, also described as ‘par l’auteur de Raison et Sensibilité’, translated by ‘Mlle É…….***.’ This translator has been identified as Eloïse Perks, who, in her short preface, presents herself as a ‘jeune étrangère’ (young foreigner), and a novice writer imitating the ‘elegant pen’ and the ‘ good model’ of Montolieu, and adds that the translation of Raison et Sensibilité ‘eut en France le plus grand succès’. Perks also adds a few brief explanatory notes on English customs, food and place names, e.g. on mince pies (I, p.82) or the English Sunday (I, p. 94), and says that she intends to translate the as yet untranslated novels: this didn’t happen, so either her version wasn’t a success, or she was pipped at the post by other translators. 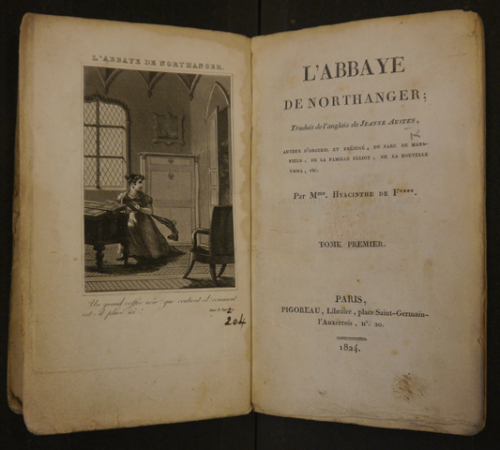 The last novel to be translated was the posthumous Northanger Abbey, translated as L’Abbaye de Northanger by Mme Hyacinthe de F****, i.e. Hyacinthe de Ferrières, who was also a novelist. The author’s name is given on the title page, but Frenchified as Jeanne Austen. Henry Austen’s ‘Biographical Notice’ is included, though without the Postscript, and with some omissions and curious errors: notably, John for (Samuel) Johnson, Arbley for Arblay (Fanny Burney), and, significantly, the translator omits the sentence ending: ‘she partook largely in all the best gifts of the comic muse’. Despite this, it must be admitted that Henry’s notice on his deceased sister does emphasise her piety and decorum.

The British Library’s copy includes the engraved frontispiece illustrating and telescoping the episode where the heroine first sees the large chest in her room and then tries to open it when she is interrupted (the figure at the door). Our copy, in three volumes, bears the stamp of the ‘cabinet de lecture’ (circulating library) of G. Dufour et Cie in Amsterdam. It has a British Museum stamp dated 16 September 1876, and is housed in modern box with the label ‘Conserved under the Adopt a Book  Appeal [by] The Jane Austen Society of North America’. The other early translations into French and German that the Library holds were, by contrast, all acquired relatively recently.

Cumulatively, these translations enable us to study how Jane Austen was interpreted in early French culture and how they convey the spirit of the original text. This early French Jane Austen is a somewhat formulaic novelist of sensibility devoid of her trademark sense of irony and social satire.