The art of wrecking a friendship 2: Henrik Pontoppidan, L. A. Ring and Nattevagt

Over a century ago there lived a famous author who, inspired by his strong social conscience, embarked on a series of novels in which he depicted in vivid and unsparing detail the conditions of his times. Among his friends he numbered a painter who shared his revolutionary ideals and his concern for social justice. However, he was unwise enough to use this friend as a model for an unflattering character in a novel about the artistic life, and the latter, deeply hurt and offended by this betrayal, ended their friendship with no further explanation.

At this point our readers may be suspecting that inspiration is running short and they are about to read a recycled version of an earlier post. However, a very similar drama was played out just a few years after Cézanne’s rupture with Zola in 1886. This time the year was 1894 and the place was Denmark.

The novel in question was Nattevagt (‘The Night Watch’, 1894; 012581.aaa.73), the work of Henrik Pontoppidan (1857-1943), of whom we shall hear more this year, as in 1917 he was to share the Nobel Prize in Literature with Karl Gjellerup. However, in the earlier part of his career he concentrated on pithy short stories set in the Danish countryside; they recall Maupassant’s mordant sketches of the avaricious and crafty Norman peasantry in their refusal to idealize rural life. These culminated in a collection named Skyer (‘Clouds’, 1890; 012581.e.23), a searing attack on the oppression of Denmark by the Conservatives and the apathy with which many Danes greeted it. The following year he began a series of three novels portraying Denmark in the era of the constitutional struggle between Conservatives and Liberals, the growth of industrialization, cultural conflict and the rise of revolutionary movements: Det forjættede Land (‘The Promised Land’, 1891–95; 12582.b.40), Lykke-Per (‘Lucky Per’,1898–1904; 012581.dd.8.), and De dødes Rige (‘The Realm of the Dead’, 1912–16; 012582.cc.35.). In writing these he made a deliberate break with his privileged family background and its clerical tradition; he himself had taught in an elementary school before turning to journalism and literature. 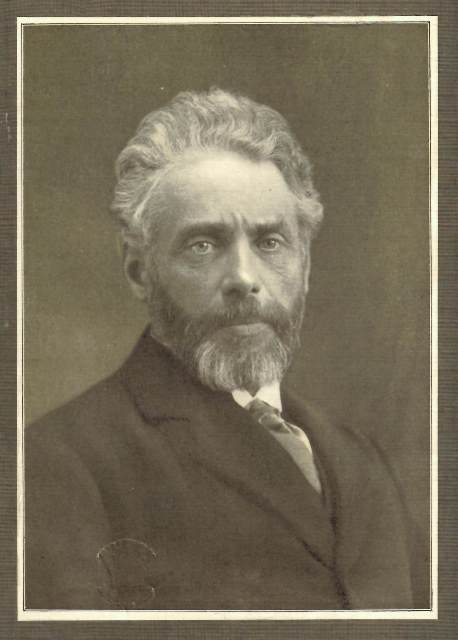 His friend, the artist L. A. Ring (1854-1933), had also grown up in the country, though in less prosperous circumstances. While Pontoppidan’s father had been a pastor, Ring’s was a wheelwright and carpenter. Originally known as Laurits Andersen, he renamed himself after his native village of Ring in Zealand in 1881. While living and working in Copenhagen Ring’s opposition to the repressive conservatism of the 1880s led him to join a student rifle corps and also to paint not only landscapes but scenes of rural poverty, industrialization and backbreaking labour, as in his studies of a railway guard (1884) and workers in the Ladby tile factory (1892). 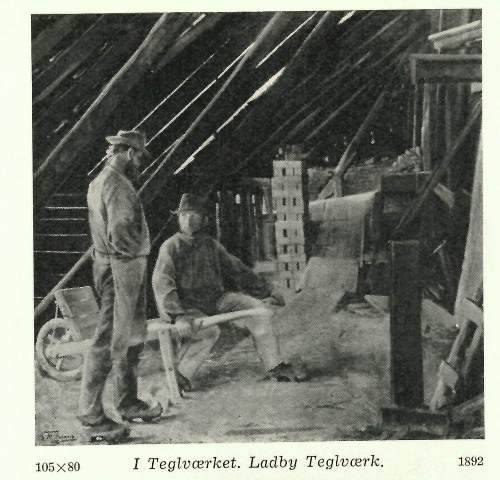 In Pontoppidan’s novel we meet two members of the Scandinavian artists’ colony in Rome, ‘Red’ Jørgen Hallager, so called because of his politics as well as the colour of his hair and beard, and his friend Thorkild Drehling. At first the latter slavishly imitates Hallager’s paintings of industrial subjects, as when Hallager’s portrayal of a worn-out labourer buried under a fall of marl and crying in vain for help (‘A Martyr’) inspires Drehling the following year to create a pastel drawing, ‘The Last Comforter’: ‘There was no difference except that in this one there was a poor woman who, in the middle of a bleak, comfortless landscape, had sunk down under the weight of a heavy burden of kindling, while out on the horizon, [instead of Jørgen’s] elegant carriage with a liveried coachman and footmen, there could be seen a misty, indistinct figure representing Death…’ No-one familiar with Ring’s work could fail to catch the allusion to his painting Evening: The old woman and death (1887). 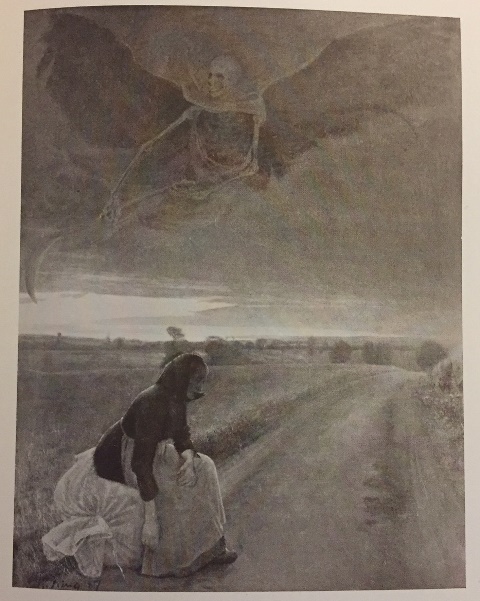 Later in the story there is a confrontation between Drehling and Hallager, who accuses him of pandering to popular taste and creating ‘chocolate-box’ art in his new works whose ‘riot of colour must surprise anyone who was accustomed to see Drehling as a faithful imitator of Hallager’s powerful but strictly restrained way of painting’, with an even more startling choice of subjects: ‘fantasies, dream pictures, strange and mysterious sights’ culminating in a large painting of the legend of the merman gazing wistfully from the sea to the church where his earthly bride Agnete sits.

However, it was not the depiction of Drehling as a failed revolutionary and exponent of the ‘lyricism’ despised by Hallager which wounded Ring. In the novel Drehling falls in love with Ursula Branth, the only child of a wealthy state counsellor and connoisseur, but before he can summon the courage to declare himself, Hallager claims her in marriage despite her father’s misgivings. Hallager’s fanatical political views lead to a scene at the Scandinavian artists’ gathering and a growing distance between the couple which culminates in Ursula’s sudden death from a cerebral aneurysm. For many years Ring had been in love with Johanne Wilde, the wife of his friend Alexander Wilde, an amateur painter. As he approached forty, realizing that the relationship could never develop further, he broke with the Wildes and travelled to Italy on a study grant in 1893.

When Nattvagt appeared the following year, Ring was alarmed by the possibility that it could be read as an allusion to his hopeless love for Johanne. This would not only have created a scandal but jeopardized his growing attachment to Sigrid Kähler, a painter half his age, whom he married in 1896. Despite the age gap, the marriage was a happy one, producing three children and enduring until Sigrid’s death in 1923. Sadly, however, the relationship between Pontoppidan and Ring was irreparably damaged; Pontoppidan gained the Nobel Prize, but forfeited forever the regard of his former friend.