There, on the Other Shore of the Amur: Stories from Russian Life in China

A historian of Sino-Western relations with a special interest in China’s relationship with Russia, I came to the British Library with a shopping list of titles I had found in the Library’s catalogue and which were unavailable anywhere else. One of them, a rarity and a witness to an era, is the subject of this post.

Measuring only 10 x 14 cm, the little book of stories by I. Georgievskii, Tam, na drugom beregu Amura (‘There, on the Other Shore of the Amur’), is kept in an envelope marked “fragile item, please handle with care”. I hope readers will enjoy a synopsis of the contents; some thoughts on the book will follow. 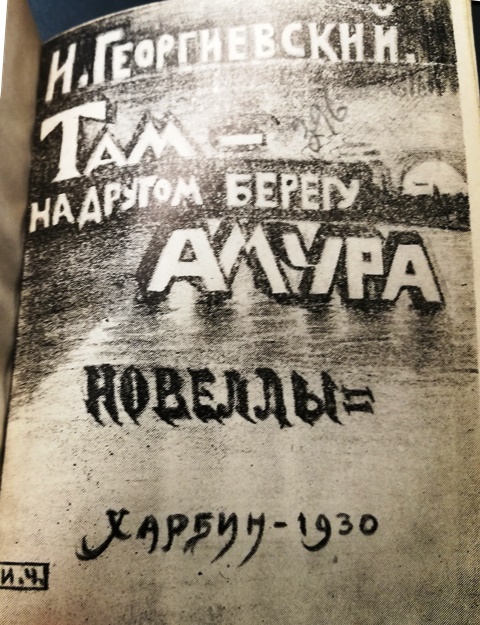 The title story describes a young woman who, with her three-year-old son, makes a desperate attempt to escape Soviet Russia and join her lost husband. Other than the Amur, the river separating Russia and China, no place names – not even the word China – are mentioned. Smugglers take the two over the Amur at night in a small rowing boat. There is great suspense, but then a happy end: mother and child having somehow transferred to a steamboat, they dock on a bright June day at a friendly wharf. By chance, Lina’s husband happens to be there, awaiting a cargo delivery. The city, into which he then whisks them away in a chauffeur-driven Packard looks more like glamorous Shanghai than Harbin, the Russian-founded railway city in Manchuria and subsequently a haven for Russian refugees from the Revolution and Civil War, where the book was published.

The next story, ‘Shuran’ is about a Russian team transporting a herd of 100,000 sheep to Mongolia through a terrible snow storm, the shuran of the title. The men manage to revive the animals, which had been covered by the snow, but not their old Mongol guide, who had predicted the storm and been frozen to death on his horse.

The rest of the collection has more humour than drama. The hilarious ‘Oy Vey, Masha!’ is about a Jewish colourman, who had escaped the Revolution to China with his wife and two daughters; alas, the family’s new servant Masha, put up in the daughters’ bedroom, turns out to be a young male impostor, a former tsarist officer-in-training. ‘A Night of Horrors’ takes place in Siberia during the Civil War: the ‘horrors’ are merely the very human fears of a soldier guarding an isolated hay warehouse: at first, he is alarmed by an impoverished peasant, then by two dogs, and he displays compassion towards all three. In ‘Crud’, set in tsarist Russia, an elderly shop assistant gets bullied by the senior staff for his shabby appearance and sacked for no fault of his own. However, he soon makes a surprising return in gentleman’s clothes: he was in fact the shop’s owner, who had wanted to test his employees. Another variation on the impostor theme is ‘The Waltz “On Manchurian Hills”’: an inebriated middle-aged man is allowed a dance to a tune made popular after the Russo-Japanese War, but the tender lady who accepts his invitation is a circus strongwoman, and ends up whizzing her poor suitor away to a splashing fall on the dance floor.

There follow four ‘miniatures’. ‘The Sage Fa-Tsai’ is about an old Chinese, whose pearls of wisdom astound his simple-minded employers: thus he suggests to a farmer, who seeks advice about marriage, that he would be better off taking two 20-year-old wives than one 40-year-old. ‘Blood and Sand’ describes a native peddler, apparently a Mongolian, trying hard to sell off a long-suffering marmot in an unidentified small town in Manchuria: haggling over the creature’s price with a potential buyer is conducted in Russo-Chinese pidgin before the sudden appearance of a fierce dog ends the marmot’s life along with the peddler’s hopes for a profit. ‘St Nicholas – Our Saviour on the Waters’ mirrors a perception among Harbin Russians, that the Chinese in town venerated the icon of St Nicholas of Myra, a patron of seafarers in the Russian Orthodox faith which was prominently displayed at the Harbin Central Railway Station. Finally, ‘A Lady from Rouen’ is a sketch of an old Frenchwoman, who was once married in Russia. Speaking funnily in broken Russian, she says she would rather live on as a ‘Russian émigré’ in China than return to her native France, which by now seems alien to her.

Nothing is known about the author of these stories and even his initial cannot be deciphered. The 106 pages of text contain many typos, as well as occasional remnants of Russian pre-revolutionary orthography. The back matter of the book advertised two other forthcoming titles by I. Georgievskii, but apparently neither came out: bibliographies of Russian publishing in China do not list them. 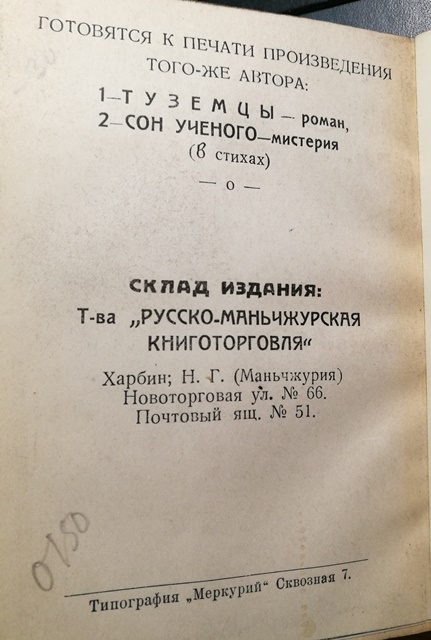 The back cover of Tam, na drugom beregu Amura, advertising further works by the author.

Georgievskii’s book is both a reminder of China as a place of escape from the suffering unleashed by the Russian Revolution a century ago and, in its own little way, is testimony to the new tribulations that awaited émigrés in their unexpected refuge. Russian life in Manchuria was to be severely tested by the Japanese occupation of the region that began in 1931. The Chinese Communist takeover in 1949 signalled the end of the Russian diaspora in China, when its members were dispersed between the Soviet Union and numerous other countries.