One of the first Decrees of the All-Russian Central Executive Committee of People’s Commissars was the Decree of 10 (23) November 1917 On Abolition of Estates and Ranks. On 16 (29) December 1917 Lenin also signed the Decree on the Equalization of Rights of All Serving in the Army, which if effect eliminated all rewards, orders and decorations. But building the Red Army brought back the question of ranks, distinctions and awards. In September 1918 the Order of the Red Banner for heroism, dedication, and courage demonstrated on the battlefield was introduced in the Soviet Russia and later in other Soviet republics. 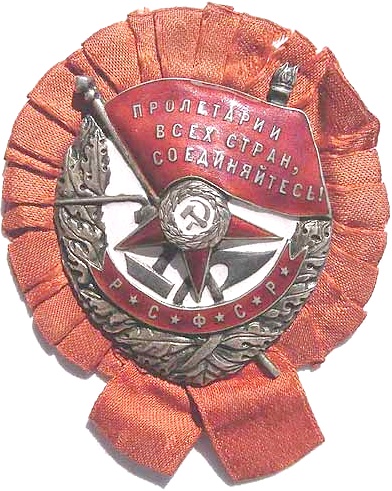 After the Soviet Union had been formed in 1922, the Order of the Red Banner received the status (in 1924) of an All-Union award. As of 1 September 1928, 14,678 people had received this award. For a long time it was the only award of the Soviet State, and therefore 285 people were awarded it twice, 31 three times and four people got four orders.

Of course, a problem soon became obvious – how should those who were not exceptionally heroic be encouraged? The Decree of 8 April 1920 stipulated that valuable gifts and cash prizes could be awarded to the military personnel in exceptional circumstances at the discretion of the Revolutionary Military Councils of the fronts and armies.

Here is an award list certifying that one medical doctor Ivan Iosifovich Timofeev of the 502nd Infantry Regiment of the 56th Infantry Division of the Western Front was rewarded with a silver watch for his dedicated work providing medical care to the sick and wounded during the Civil War. In 1918-19 the Red Army attempted a westward offensive into areas abandoned by defeated Germany. Following on this operation, in 1920 Soviet Russia fought a war against the newly-established republic of Poland, advancing as far as the outskirts of Warsaw before being driven back and signing the Peace of Riga in March 1921. However, the armies of the Western front were still stationed in Western Russia with the headquarters in Smolensk. 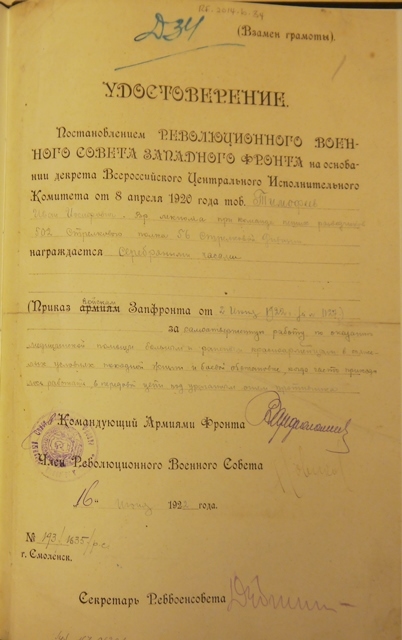 The certificate is dated June 1922 and signed by the Deputy Commander of the armies Nikolai Efimovich Varfolomeev (1890-1939) and the Member of the Revolutionary Military Council of the Western Front Nikolai Frolovich Novikov (1891-1937). Professional officer Varfolomeev joined the Red Army voluntarily in March 1918 and immediately was included in the commission that worked out the new borders between Soviet Russia and Germany in accordance with the Treaty of Brest-Litovsk, which ended the war between the two countries. Second in command of the Western Front after Mikhail Tukhachevsky (1893-1937), in 1925 Varfolomeev was appointed his deputy as head of strategic training of all military academies of the Red Army. In the British Library, we have books written by Nikolai Varfolomeev on the year 1918 at the Western Front of the ‘Imperialist war’ (Moscow, 1933; Ac.4343.b/3) and the military operation near the town of Mozyr in 1920 (Moscow, 1930; YA.1996.a.23226).

After the civil war was mainly over Nikolai Frolovich Novikov made a career in the party ranks and lived in Moscow in the infamous House on the Embankment, where Tukhachevsky was his neighbour. Tukhachevsky, Varfolomeev and Novikov were executed during the Stalin purges. We do not know the fate of the medical doctor Ivan Timofeev or the secretary who also signed the certificate. But maybe a silver watch treasured in one family is still going.