French entertainment in the Evanion collection: from Robert-Houdin to La Foire du Trône

The current British Library exhibition ‘Victorian Entertainement: There Will Be Fun’  starts with a poster advertising the day performances and ‘Soirées Fantastiques’ of French magician Robert-Houdin, ‘The Father of Modern Magic’. After the Revolution of February 1848, which deposed the French King Louis Philippe, Robert-Houdin went to London where he performed at the St James’s Theatre in the summer of 1848.

The third part of the show involved a Levitation Illusion, called ‘Escamotage de Robert-Houding Fils, Suspension Etherenne’, which is illustrated at the bottom of the poster. The trick is still used nowadays by street performers throughout the world. In this performance, starring his own son, Robert-Houdin associated the trick with the use of ether, claiming that he had discovered a new marvellous property of the substance: its inhalation would make the boy’s body as light as a balloon, allowing him to float in the air with only a stick as a support.

Robert-Houdin was an inspiration for Evanion, the London conjuror and ventriloquist who started performing in 1849 and whose collection of ephemera related to Victorian entertainment, magic and performance is currently on display in the exhibition.

Among the French items in the collection  several posters advertise performances held at the Foire du Trône in Paris in the 1880s. They show the diversity of the attractions held at this fair, dating back to the Middle Ages, which still takes place every year around Easter. The fair used to be held by the Abbey of Saint-Antoine and was called ‘Foire au Pain d’Epice’ because of the gingerbread made by the monks for the occasion.

The Fair owes its name to its location, a square in the East of Paris which used to be called ‘Place du Trône’ after the throne erected there as part of the celebrations for the wedding of Louis XIV and Maria Theresa of Spain in 1660 (depicted in L’entrée triomphante de leurs majestez ... dans la ville de Paris... (Paris, 1660) British Library 37/604.i.22.). During the French Revolution, it became the square of the Toppled Throne, ‘Place du Trône renversé’, where a guillotine was set up, and it was later renamed Place de la Nation. 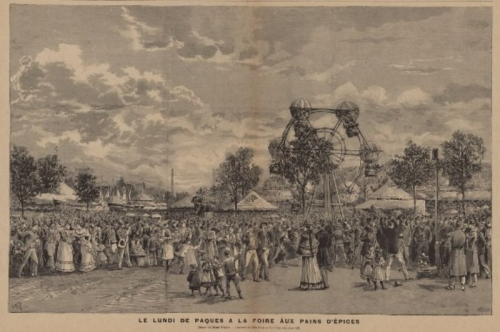 In an engraving printed in Le Journal Illustré of 16 April 1893, crowds of adults and children wander through the fair and its tents; open air activities include, from left to right, the selling and throwing of confetti, snack selling, giant effigies, musicians, a game of balls, an air balloons themed Ferris wheel, and the Hammer game. Examples of Foire du Trône attractions featuring in the posters collected by Evanion include races accompanied by military bands and riding lessons for the general public at the Hippodrome (1881, Evanion 593, pictured above). 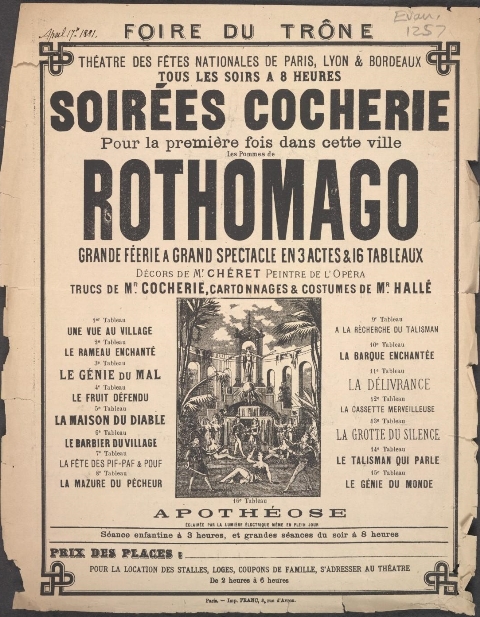 It also included performances of Rothomago, a fairy spectacle in 3 acts and 16 tableaux (including the Enchanted Twig, the House of the Devil, the Speaking Talisman, and the Genius of the World, finishing with an Apotheosis illuminated with electric light ‘even during daytime’), with painted backgrounds, cardboard sets and exotic costumes. The exuberance of this dramatic love comedy exudes from the illustration at the centre of the poster, peopled with characters of different dress and status, from the majestic fairy standing at the top of a jungle temple, to the lovers at the centre of the scene. 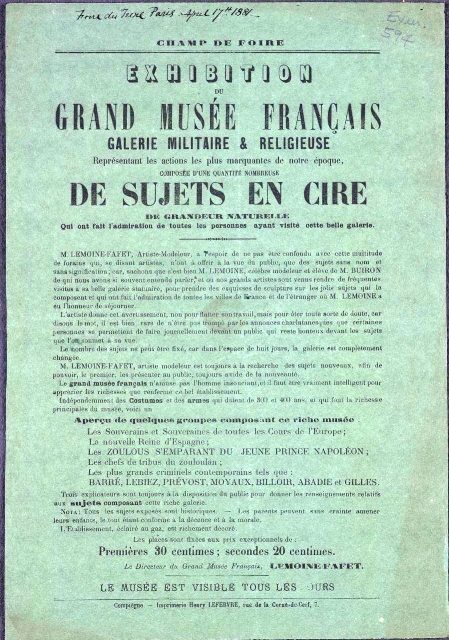 The ‘Champ de Foire’ was a space for the display of curious, instructive, entertaining or terrifying exhibits, like the Great French Museum of Wax Characters, focused on contemporary military and religious figures. It included life-size effigies of the sovereigns of Europe, and the tribal chiefs of Zululand, with an action scene showing the recent dramatic death, in 1879, of the young prince Napoleon (son of the emperor Napoleon III), who had joined the British troops in the Anglo-Zulu War. The show also displayed models of the most famous contemporary criminals. The author presents himself in the tract as an accredited and serious ‘artist’, who uses historical accessories (costumes and arms are ‘300 to 400 years old’) and distances himself from fairground entertainers and charlatans: his ‘gallerie’ is not designed to entertain the idle, as one needs to be ‘vraiment intelligent’ to appreciate its riches, though three ‘explicateurs’ will guide visitors. The fair featured the Glass Weaver, a ‘famous artist’ who would make her ‘chefs-d’oeuvre’ in front of the public, producing a variety of objects such as carafes, test tubes, crystal flowers, and wonderfully long threads of glass (1887). The illustration shows how craft making becomes a performance: rays of light emanate from her head and she works at a table, behind a glass screen, surrounded by clouds of smoke and flanked by two monumental lions.

The Foire du Trône hosted a variety of shows and performances, from the technologically sophisticated, like cinematographic projections, which started in the 1890s, exalting the wonders of modern science, to the more modest, like the Living statues act, with street artists dressed and made up to impress the crowds (see the backstage preparation of ‘Golden men’ in 1893). 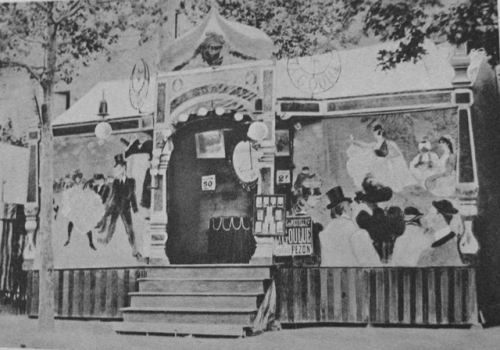 The fair held many stands and entertainments tents. In 1895, Toulouse-Lautrec painted two panels for the oriental booth of La Goulue (‘the Glutton’), Louise Weber, a cancan dancer who had gained fame and wealth by performing at the new Moulin Rouge cabaret which opened in Montmartre in 1889. In the left panel La Goulue, dances at the Moulin Rouge with her partner, the tall and gaunt Valentin the Désossé (‘the Boneless’); in the right panel she performs a ‘danse mauresque’, belly-dancing accompanied on the piano, next to two characters in oriental costumes. Unfortunately, her show at the fair was a failure and eventually closed down.

Throughout the 20th century, the Foire du Trône remained a major venue for popular entertainment: its atmosphere was captured in the 1920s and 1930s by news agencies like ‘Agence Rol’, ‘Meurisse’ or ‘Mondial Photo-Presse’ and in the 1950s and 1960s by famous photographers like Doisneau, Izis, or Depardon. On the Bibliothèque de France Gallica Website you can listen to recordings of songs and music of the Foire du Trône, like Jean Nivel’s ‘Pots-pourris de marches, valses, tangos, boleros, javas, polkas, slow, fox’, from 1955, or Jean Bérard playing his barrel organ in the 1960s.