Music of the Revolution: the Hymn of Free Russia

There has been great agitation in Petrograd all day. Processions have been parading the main streets. At several points the mob shouted for ‘Bread and peace!’ At others it sang the Working Man’s Marseillaise. In the Nevsky Prospekt there have been slight disorders.

This is how the French Ambassador to Russia Maurice Paléologue recorded 8 March (23 February old style) 1917, the day when the Russian Revolution started. 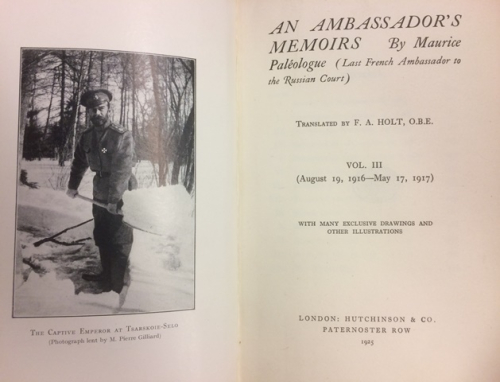 Spontaneous demonstrations to mark International Women’s Day were joined by angry women in bread-lines. The next day meetings, riots and strikes in Petrograd were multiplying and mixing with acts of hooliganism and vandalism. Almost all industrial enterprises were shut down and people were matching along the central street in Petrograd, the Nevsky Prospekt, causing severe disruptions to public transport.

Demonstrators were met sympathetically by the middle class and even by some troops. Nicholas II, who had left for the Staff Head Quarters (Stavka) at Mogilev some 400 miles away from the capital just days before the unrest, received belated reports and underestimated (or wanted to underestimate?) the seriousness of the events. When he finally commanded the use of troops to restore order, riots had already spread to some of the regiments stationed in Petrograd. Attempts to restore order ended in clashes between the troops and the protestors which only incited further protests. At the same time, politicians at the Duma (parliament), statesmen at the State Council (the supreme state advisory body to the Tsar) and the cabinet ministers all saw themselves as Russia’s saviours. The overall crisis of the old political system and the regime was so deep that the Tsar’s abdication seemed to be the most straightforward and secure solution. The situation spiralled out of control and within a week Russian Tsarism was over, no-one having risen to defend it.

The news was greeted with great enthusiasm by most Russian intellectuals and liberals. Expectations were high and hopes that a truly free Russia was already a reality turned into a creative euphoria: lyrics, essays and graphics glorifying and celebrating the Revolution and the people who made it happen, appeared in print and were read at rallies and meetings.

On 24 (11) March, the newspaper Birzhevye vedomosti (‘Stock-Exchange News’; Mic.B.1089) published a memo ‘Glazunov and Gorky’, informing readers that the actors of the ex-Imperial – now State – Mariinski Theatre asked the Director of the Petrograd Conservatoire, composer Aleksandr Glazunov, to write a new hymn for the new Russia. This was required for the ceremonial re-opening of the Opera House, which had been closed for a month during the unrest in the capital. As the re-opening was scheduled for the 26 (13) March, Glazunov declined saying that it was an impossible task for him at such a short notice. According to the memo, he suggested to ‬sing a Russian folk song Ekh, ukhnem! aka the ‘Song of the Volga Boatmen’ (you can her it performed here by Feodor Chaliapin in a recording from 1902:Download Эй,_ухнем!_-_Фёдор_Шаляпин). The popular writer Maxim Gorky was asked to make necessary amendments to the lyrics.

Meanwhile, in Moscow, another Romantic composer Aleksandr Grechaninov  also came up with the idea of a hymn, performed here in 1926 by David Medoff:  Download The_hymn_of_free_Russia_-_Гимн_свободной_России_(text_and_music_-_1917) 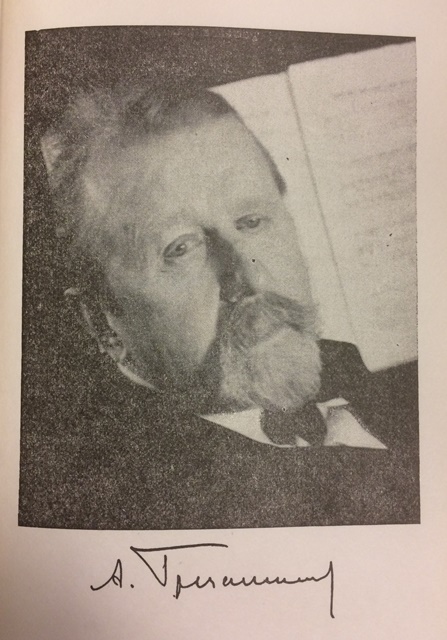 In his memoirs, written in 1934 when he was living abroad having fled Soviet Russia, Grechaninov recalled:

The news of the Revolution of February, 1917, was greeted in Moscow with enthusiasm. People poured into the streets wearing red flowers in their lapels. Strangers embraced each other with tears of joy in their eyes. […] An idea suddenly struck me: I must write a new national anthem! I hurried home, and in half an hour I had composed music of the anthem. But what about the words? The first two lines, "Long live Russia — The country of the free," I took from a poem by Fedor Sologub, but I did not like the rest of the poem. What was I to do? I telephoned Constants Balmont , the poet. He came to see me without delay, and in a few minutes wrote out the text. Manuscript in hand, I went to see Gutheil [a music publisher]. Without wasting any time he sent the music to the printer, and on the following afternoon the Gutheil store displayed copies of my Hymn of Free Russia. The proceeds from the sales were turned over to the liberated political prisoners. The Bolshoy Theater was closed for only a few days. As soon as it reopened, my new anthem was performed, along with the Marseillaise, by the chorus and orchestra of the Bolshoy Theater led by Emil Cooper. Thanks to the simple melody and fine text, my anthem soon became popular, not only in Russia but also abroad. My American friends, Kurt Schindler and his wife, translated it into English, and it was published by the G. Schirmer Company.

Grechaninov, obviously, was not aware that the score had already been published in London in 1917, with ‘with harmonisation and poem by Clarence Lucas’, a Canadian composer, who wrote his own lyrics instead of translating Balmont’s. 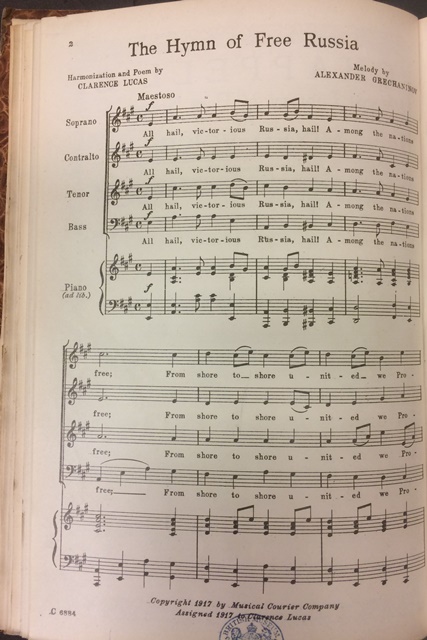 Grechaninov claimed that “the Hymn of Free Russia was still sung even when there was no more freedom left in Russia”, and indeed the tune became a theme of Radio Liberty (RL), that was broadcast to the Soviet Union during the Cold War.