The German poet Friedrich Hölderlin, whose personal vision of Greece inspired much of his poetry and whose life spanned the years of the Greek struggle for independence, wrote in his elegy ‘Brod und Wein’ (c.1800) the famous words ‘Wozu Dichter in dürftiger Zeit?’ These words, pondering the purpose of poets in times of crisis and oppression, would be only too applicable to the career of the Greek poet Takis Sinopoulos ,born 100 years ago today. 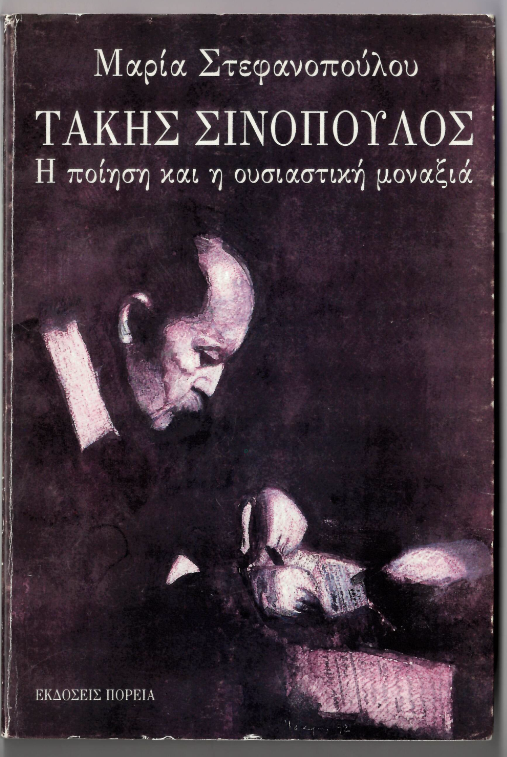 Sinopoulos was a 22-year-old medical student at the University of Athens when, in 1940, the Greco-Italian War  broke out. During this and the two conflicts that followed – the German-Italian occupation (1941-44) and the Civil War (1945-49) – he served as a doctor in the Sixth Army hospital at Loutráki on the Corinthian Gulf, and then with fighting units during the guerrilla fighting of the Civil War. Despite the professional control and objectivity which he was forced to exercise in carrying out his medical duties, he was deeply affected by the horrors which he observed, and throughout the rest of his life he sought to process and purge them in his paintings and poetry.

Sinopoulos had come of age under the dictatorship of Ioannis Metaxas, whose coup of 4 August 1936 led to a system modelled on Italian fascism where censorship was brutally enforced. It was not until 1951 that he wrote his first collection of poems, introducing images and themes which would recur throughout all his later works as he attempted to expunge the hallucinations which haunted him throughout his creative life. The first poem of all, ‘Elpenor’, recalls the fate of the first Greek hero to fall in the Trojan War, but also a terrifying vision which Sinopoulos experienced one blazing summer day in 1944 when he distinctly saw a childhood friend who had been killed in battle two years earlier.

The poems echo with the existential loneliness of humans even within friendship or erotic relationships, making true communication eternally impossible, and with the conviction that true happiness is unattainable, even when the figure of Helen of Troy, and all that she symbolizes, flickers through the pages of the Cantos (1953). The temptations of death and oblivion which they proclaim haunted him for several years afterwards, plunging him into a psychosomatic crisis in which he believed himself to be gravely ill. This suddenly resolved itself in 1956 with the publication of Hē gnōrimia me ton Max (‘Acquaintance with Max’), the only poem which he ever completed with such rapidity. Max is at once an alter ago, a builder of houses, and an elder brother with Christ-like qualities, but ultimately a figure who vanishes amid the images of burning and destruction, terror and death in life which reappear in Sinopoulos's later writings.

The earliest of Sinopoulos’s poems in the British Library’s holdings is To hasma tēs Iōannas kai tou Kōnstantinou (‘The song of Joanna and Constantine’). This took him seven years to write as he experimented with the imagery of the Song of Songs and the mingling of Eros and Thanatos in the disjointed narrative of a couple living in a farmhouse near his native village of Agoulinitsa, the shadowy figures of a mother-in-law, neighbour and dead child, and, once again, the futility of any attempt to build communications between them. Although he continued to experiment with automatic writing to break his writer’s block, political events once again conspired to delay the publication of his next and perhaps greatest work until 1972. The military coup of April 1967 inevitably hampered freedom of expression, but provided an apt context in which to revisit Sinopoulous’s experiences as a doctor in the army with which he had served for almost five years. In Thessaly and Macedonia he had seen captured guerrillas shot without mercy and his own friends and comrades blown apart by mines and grenades, and had had to gather fragments of their bodies from the blasted trees and bushes where they had landed. The result was Nekrodeipnos (‘Deathfeast’, 1972). In an equally fractured landscape recalling Eliot’s Waste Land, the shades of the dead mingle with the banalities of contemporary life and nostalgic images of June evenings in Athens many years before. There are reminiscences of Homer’s catalogue of the ships in the litany of names of the dead who crowd around the poet, and even a direct encounter with God does little to relieve the overall bleakness of a climax in which the poet is certified as an ‘inhabitant of the eternal’. 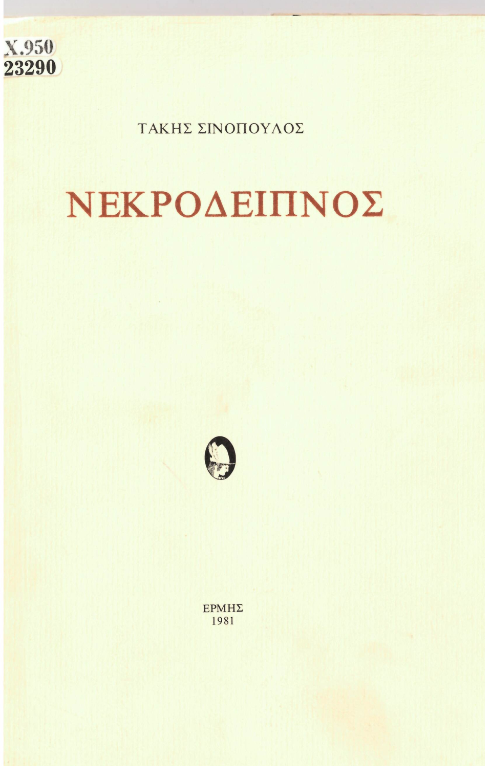 Unlike the poets of the First World War, those of Greece’s decade of agony are less well known to English-speaking readers, although Kimon Friar produced a fine translation of a broad selection of Sinopoulos’s work in Landscape of Death: the selected poems of Takis Sinopoulos (Columbus, Ohio, 1979: X.950/6323). Through his evocation of scenes as poignant and horrifying as those of Goya’s Desastres de la Guerra, Sinopoulos, though unable to save the men whose tragedies he witnessed, could at least ensure that they would not be forgotten.