Dr Catherine Delano-Smith, former reader in historical geography at the University of Nottingham, and now Senior Research Fellow at the Institute of Historical Research in the School of Advanced Studies at the University of London, donated two books to the British Library in spring 2015 relating to the French Resistance and its fighters in the Second World War.

The books originally came from the library of André Canivez (1909-1981), professor of philosophy at the University of Strasbourg. André Canivez was related to Dr Delano-Smith by marriage, as her mother’s niece was his second wife, Mouza Raskolnikov. Her first husband was Fedor Raskolnikov (1892-1939), a Bolshevik and eminent Russian politician who went into exile to France in 1938 and died the following year in unclear circumstances. Mouza had spent the rest of the Second World War hiding in the Massif Central at Treignac. She married Canivez at the end of the hostilities and moved to Strasbourg with him. André Canivez had been a prisoner of war and taken to a camp when France capitulated; he survived his POW camp experiences but was left in very poor health.

Dr Delano-Smith and her mother visited the couple and, after her mother’s death in 1978, Catherine returned to Strasbourg regularly to visit Mouza, who was by then suffering from Alzheimer’s disease. After Mouza’s death, Catherine inherited part of André Canivez’s library and decided to donate the above books. She supplemented them with a photograph of an unnamed French Resistance fighter (without a blindfold) taken just before his execution. She feels that this picture was of significant importance to André Canivez as it used to hang in his study. This picture has always been a mystery and despite extensive research it has never been possible to identify the man. 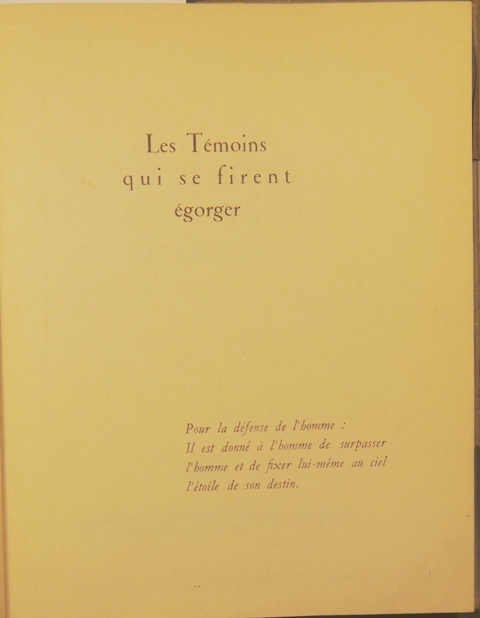 The first donation, entitled Les Témoins qui se firent Egorger, is an account of conditions in the concentration camps in Germany and Poland, and also of life in the French Resistance. It is a touching tribute to all those who died in horrific circumstances. The book is enriched with many photographs, none too horrific to look at but sufficient to bring home the terrible conditions these men and women endured. As well as many anonymous pictures there are also tributes to specific Resistance fighters who fought for their country. In addition to the current edition, 500 copies were printed for the families of the deceased. The A4 size photograph has been inserted in the British Library copy at the request of Dr Delano-Smith. 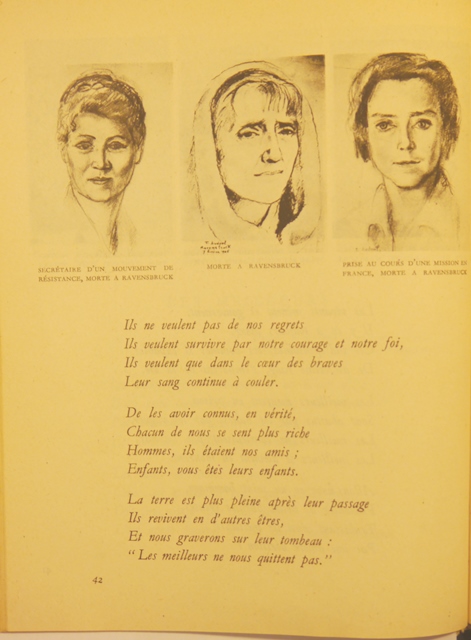 Portraits of women from the Resistance who died in the Ravensbrück concentration camp, from Les Témoins qui se firent Egorger

The second donation, Geoles Allemandes (Loos 1942-1943) (Avesnes-sur-Help, 1945) is a fictionalised account by Dr Denis Cordonnier, who was detained in the prison of Loos in northern France for a year and released before the end of the war. Whilst in prison he had promised his fellow Resistance prisoners that if he was released he would write a novel testifying to their sufferings but also celebrating the bravery and patriotism of these men who had been ready to give their lives for their country. Geoles Allemandes (Loos 1942-1943) is the fruit of this promise. Names were changed, but events and characters closely reflected reality. The story is narrated by a Dr Duval who through his practitioner’s experience, his commitment to the Resistance, and his shrewd analysis of the human mind, is the perfect person to depict the effect of incarceration on the prisoners at Loos. Without lapsing into pathos, it is a very sensitive and realistic account. 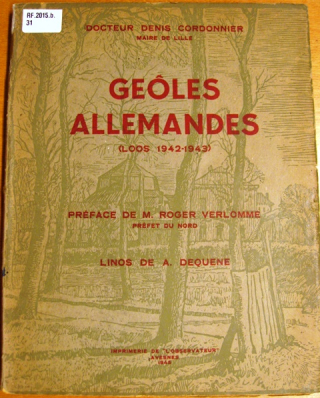 These two donations were very timely, coinciding with the 70th anniversary of the end of the Second World War and are a valuable addition to the British Library’s French literature of the war. These two volumes are not only a poignant testimony to the horrors of the Second World War, but also a celebration of the Maquisards and a reminder of how much France owes to the French Resistance.