A two-volume copy of the Cent Nouvelles Nouvelles, a collection of tales delivered by different historical characters, has recently been acquired for the British Library French collections. 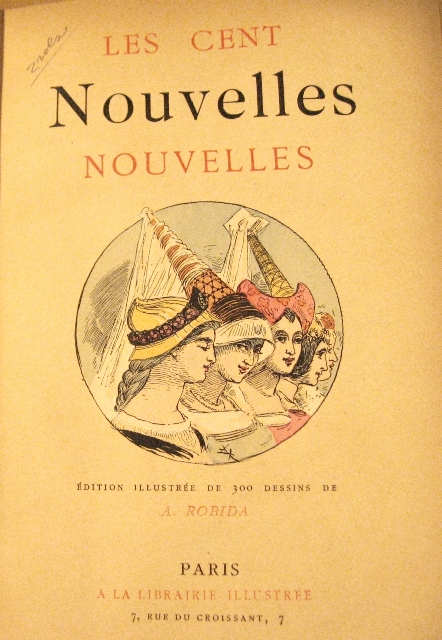 This collection of 100 entertaining and often licentious short stories was written at the court of Philip the Good, Duke of Burgundy, who was presented with a now-lost manuscript copy of the text in the 1460s. The main surviving manuscript copy of the work is in Glasgow University Library, (Hunter, 252 (U. 4. 10)), also produced in the 1460s at the court of Burgundy. The collection is anonymous, though it was (wrongly) attributed to Antoine de la Salle, author of the late medieval chivalric novel Jean de Saintré, by Antoine Vérard, who published the first (illustrated) edition of the Cent Nouvelles Nouvelles in 1486. The text was reprinted by Vérard in 1498-99, and led to new editions throughout the 16th century. 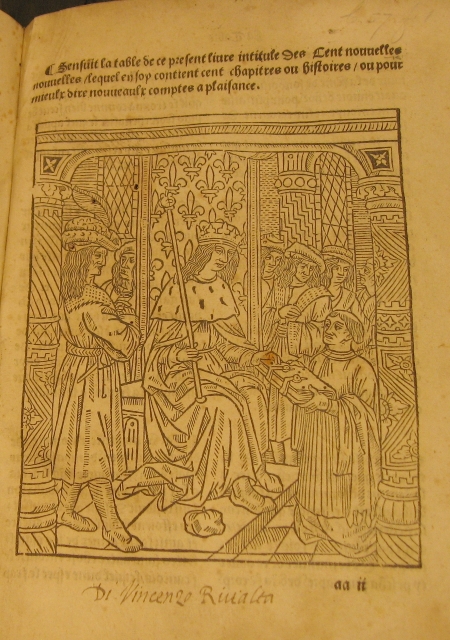 In the first half of the 20th century, the Cent Nouvelles Nouvelles have been attributed by their editor Pierre Champion to ‘Mgr de la Roche’, Philippe Pot, Chamberlain to the Duke of Burgundy, who is responsible for the highest number of short stories in the compilation (15 in total). The text, which bears the influence of the medieval genre of the fabliau, is modelled on Boccaccio’s highly influential Decameron, which was disseminated in French through its translation by Laurent de Premierfait in the 1410s, published by Vérard in 1485, and reprinted c. 1499-1503. 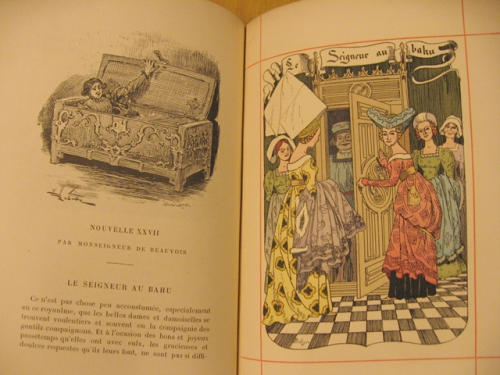 Illustrations in Cent Nouvelles Nouvelles, by. A. Robida (left) and L. Lebègue (right) 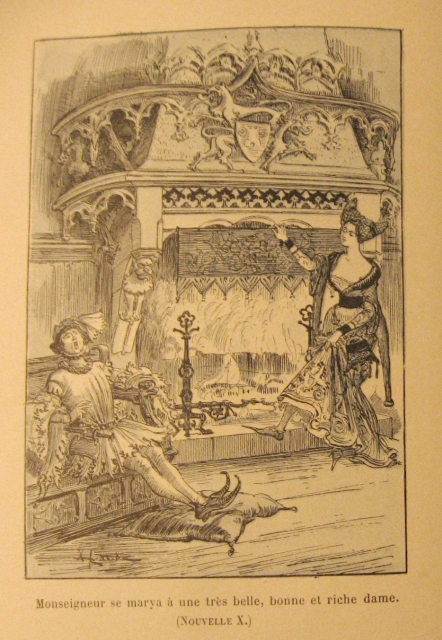 Robida had a particular interest in the Middle Ages and contributed to several works relating to the period. He engaged in illustrated youth fiction, authoring Le roi des jongleurs (1896) and Les Assiégés de Compiègne, 1430 set around the story of Joan of Arc, and illustrating Georges Trémisot’s Le bon roi Dagobert  (1918).  He also illustrated the collection Contes et Fabliaux du Moyen Age (1908), as well as the works of the 15th century poet François Villon (1897;  12237.k.5.). In Les escholiers du temps jadis (1907), Robida tells the story of students in Parisian and provincial universities from the Middle Ages to his own time. 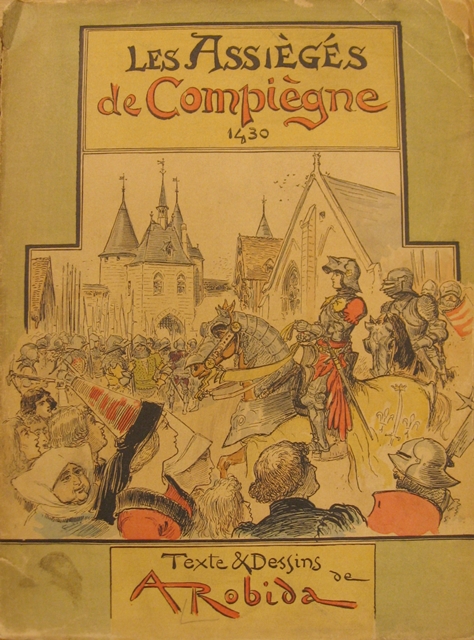 Robida illustrated the very successful play by Frédéric Gaillardet and Alexandre Dumas, La Tour de Nesle, first performed in 1832, which tells the scandalous story of the daughters-in-law of Philip IV of France (the plot reappears in Maurice Druon’s 1955 bestseller Les Rois Maudits, 011306.gg.15.). The British Library holds a copy of the play, printed for the Société des Amis des Livres, donated and signed by its president, Henri Beraldi. 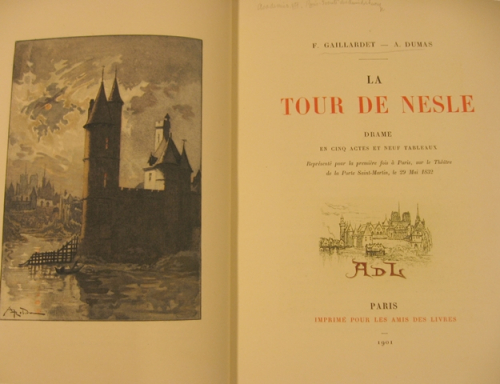 Robida also produced several series of books encompassing the history and architecture of old European cities (Les Vieilles Villes 1878-1880, 10129.ee.1.) and regions of France (La Vieille France) as well as of Paris, about which he was particularly prolific. He was the instigator of the monumental and hugely successful ‘Vieux Paris’ reconstituted historical quarter at the International Exhibition of 1900. 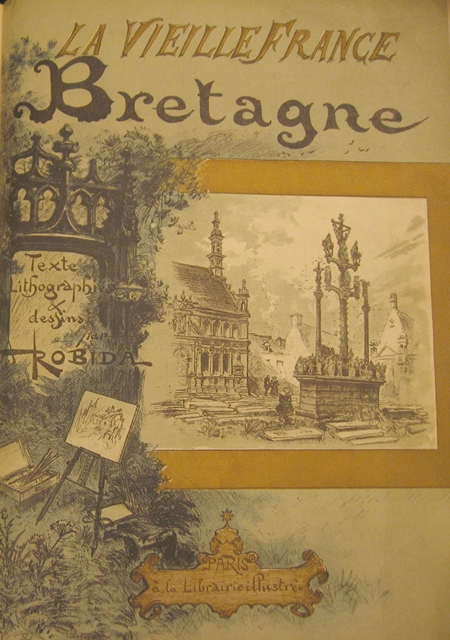 Our copy of the Lebègue plates for the Cent Nouvelles Nouvelles, issued by Charles Carrington, is number 104 of an edition of 120 copies. A folded advertisement for this edition is bound at the end of the second volume, along with its preface by Jules de Marthold. 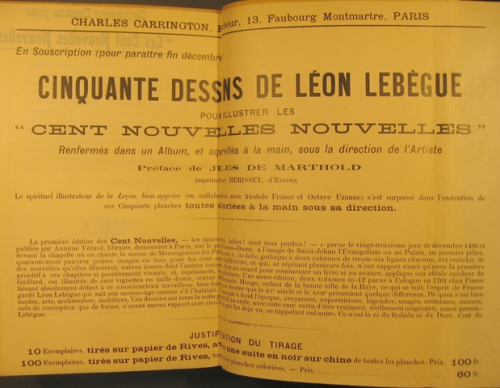 Advertisement for Lebègue’s 50 illustrations of the Cent Nouvelles Nouvelles

The pages of the Lebègue volume fit within four red lines which delimitate a central space, a feature which is strongly reminiscent of the rulings on the folios of medieval manuscripts. Cover of Lebègue’s illustrations of the Cent Nouvelles Nouvelles

This concerted medievalism, which agrees with the content and setting of the Cent Nouvelles Nouvelles is immediately apparent on the book cover, with a Gothicising script printed in red ink, framed by two tournament spears and a scroll at the bottom. At the centre of the page are depicted a lady with a distinctive headdress and a knight in armour jointly reading a book in between two rose windows. On top of the illustration, the title is printed in a vegetal frame and ornamented by two lilies, and under the image feature the names of the artist, the writer of the preface and the printer, as well as the date of publication. Despite the anonymity of the author of the Cent Nouvelles Nouvelles, the front cover designed by Lebègue contains a wealth of information, which contrasts with the paucity of bibliographic information provided in medieval manuscripts.