In 1820 James Finlayson, a Scottish Quaker and self-taught engineer, received permission from the Senate of Finland to build a textile factory in Tampere using water power from the Tammerkoski rapids. Three years earlier he had been invited by Tsar Alexander I to set up a similar factory in St. Petersburg, and he was now bringing modern industrial methods to Finland, then under Russian rule. Finlayson, a passionate philanthropist as well as a good businessman, was zealous in providing the best possible conditions for his employees; the enterprise throve and grew to become Tampere’s biggest provider of employment, with considerable benefit to the town’s social conditions. Finlayson founded not only an orphanage but also a school for the workers’ children, and it was here that Minna Canth, one of the most important figures in the Finnish women’s movement received her early education. 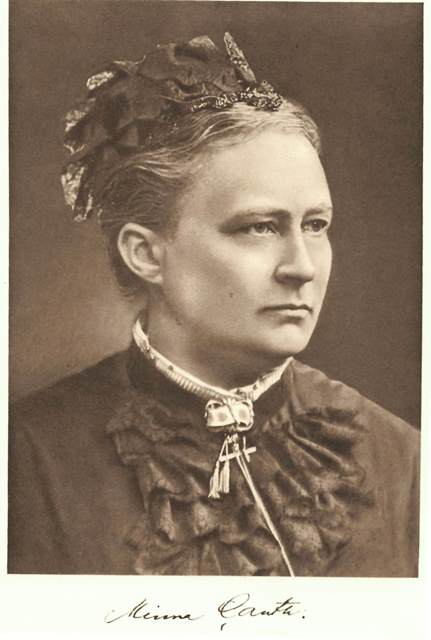 Ulrika Wilhelmina Johnsson was born in Tampere on 19 March 1844, the elder daughter and first surviving child of Gustav Vilhelm Johnsson, whose hard work in the Finlayson textile factory enabled him to become a foreman there. At home and at school she was strongly influenced by the emphasis on industry and piety, and when in 1853 her father was promoted to manager of the Finlayson textile shop in Kuopio, she continued her education there, doing so well that she was allowed to enter a school for daughters of the upper classes and, in 1863, to enrol at the newly-founded teacher training college in Jyväskylä  (now the University of Jyväskylä), the first institute in Finland to admit women to higher education and to deliver teaching in Finnish.

However, before completing her studies, Minna married the college’s natural sciences teacher, Johan Canth, who was nine years her senior, and over the next thirteen years produced a family of seven children. Nevertheless, this was not the end of her ambitions, which developed in a literary direction. Canth became the editor of the newspaper Keski-Suomi (Central Finland), and his wife contributed articles on matters particularly relevant to women, including temperance, which she saw as a means of combating the addiction to alcohol which reduced many families to poverty. Her polemical attitude, which her husband shared, compelled them to leave Keski-Suomi in 1876 and to move in 1877 to a rival newspaper, Päijänne, which began to print her stories. Two years later her first collection of these, Novelleja ja kertomuksia (‘Novellas and Tales’) appeared in print.

Minna Canth did not shrink from taking on prominent public figures such as churchmen and authors when the occasion demanded. In 1885 she published one of her most famous plays, Työmiehen vaimo (‘The Wife of a Workman’), the story of a spirited and capable woman, Johanna, whose shiftless husband Risto ruins the family by drinking her money away while the laws governing women’s property render her helpless to prevent him. Set in contemporary Kuopio, the drama created a considerable scandal; that same year, its author spoke out robustly against a bishop who claimed that emancipation was against God’s law and the writer Gustaf af Geijerstam who supported him by arguing that men’s different needs and nature made it impossible for them to achieve feminine purity. Before the year was out, the Finnish Parliament had passed a new law allowing married women to hold property in their own right. Canth wrote many other plays and works of fiction, but her last drama, Anna Liisa  is among the greatest and is still often performed. Seduced by Mikko, a local youth, the fifteen-year-old heroine conceals the resulting pregnancy and stifles her baby in a fit of panic. Mikko’s mother Husso buries it secretly, but she and Mikko resort to blackmail when, some time later, another suitor, Johannes, proposes marriage to Anna Liisa. Refusing to give in even if it means sacrificing her happiness, Anna Liisa confesses and goes to prison, but with a calm mind and clear conscience. Although critics have argued against the unfairness of a conclusion in which Mikko escapes punishment and Anna Liisa bears it alone, she emerges as a strong woman capable of making moral choices and determining her own future on the basis of their integrity. 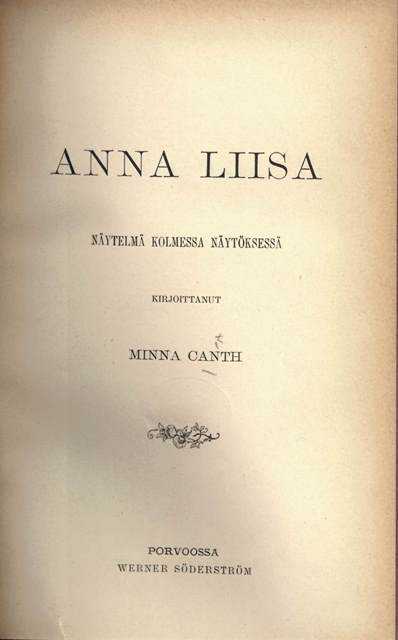 Johan Canth had died in 1879, and while pursuing her literary career his widow continued to manage not only her household and family of seven but the draper’s shop which she had taken over from her father. Her vitality and outspokenness made her a tireless worker for women’s rights and human rights at a time when the Grand Duchy of Finland was striving towards independence from Russia, and her birthday is marked every year as a celebration of social equality throughout Finland.