The status of women in the Soviet Union and their role in the construction of the new Socialist society are issues that spur great enthusiasm and debate. Even for the less-studied regions of the USSR, such as Central Asia and the Steppe, a number of scholars are blazing new trails towards an understanding of gender and its impact on the Soviet experiment. Their research dissects the imbrication of gender, class, ethnicity, religion and political affiliation that went into constructing the identities of Soviet women during this period.

But what exactly did these identities look like? Given the myriad of experiences embodied by Central Asians during this period, we will never know for certain just what it was like to be a woman in Stalin’s Uzbekistan or Tajikistan. We do know, however, what the Communist Party wanted it to be like, thanks to a series of periodicals held at the British Library. 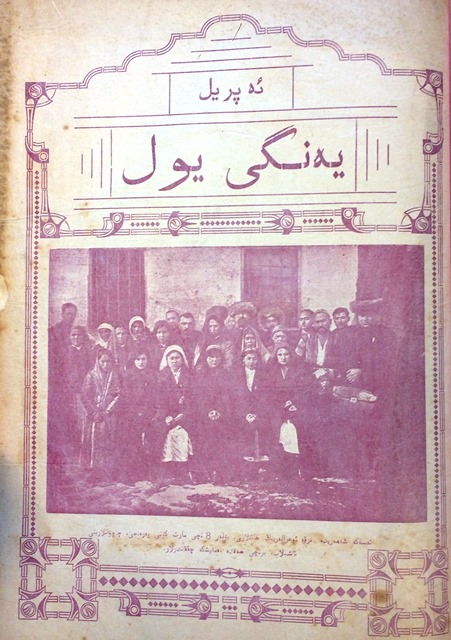 Yangi Yo’l  (‘New Way’) was a monthly women’s and girls’ periodical published by the Uzbekistan Communist Party (Bolshevik) Central Committee for Women. The British Library holds only four issues, all from 1926-27: Volume 1, Nos 11-12 and 13-16; and Volume 2 Nos 4-7 and 9. The articles, supplemented heavily by photographs, sketches and diagrams, are all written in the old Perso-Arabic script. The new Latin alphabet  proposed for the Turkic languages in 1926 made only sporadic appearances, never in a form meant to teach readers how to use it.

While the magazine might not have been used to keep women and girls up to date with pedagogical innovations, it did seek to broaden their horizons far beyond the traditional domestic arena. An article on ‘Women-Girls’ Services in World Production’, which appeared in Nos 10 and 11-12, provides ample evidence of women’s participation in professions previously reserved for men. Photographs illustrate unveiled, smiling women operating machinery, lugging barrels, laying bricks and making horseshoes over a large anvil. 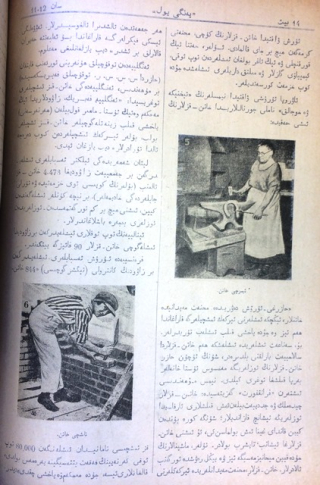 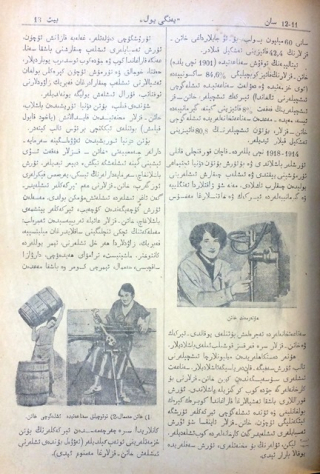 These pictures all show white women at work, rather than “emancipated” Uzbek or Central Asian women. They form part of a complicated and checkered history in which cultural imperialism and feminism intersected in a concerted effort to change the status of non-Western women. The images raise the question of how exactly the readers of these periodicals would have identified the new modern Soviet woman. Was she healthy, happy and productive on her own, participating in the construction of a Socialist paradise; or were light skin and large eyes a necessary component of that portrait too?

Indeed, Uzbek women workers strike a stark contrast with their Russian counterparts when we consider their representation in other articles. A photograph in No. 15 shows Uzbek silk makers at work: a group of middle-aged women, all but one with her hair covered, and none using machinery. Similar to this is the picture of a group of Samarqandi female artisans, also deprived of modern labour-saving devices. 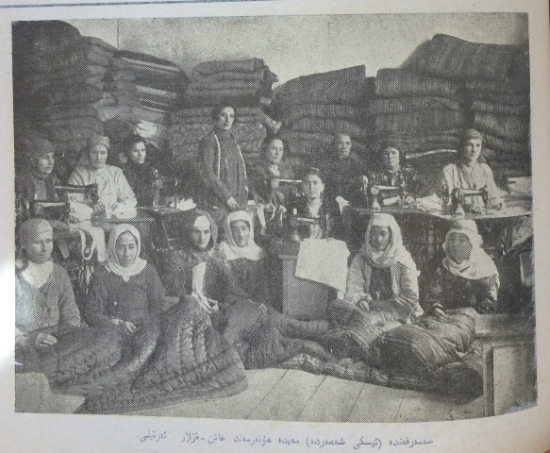 This is a far cry from the smiling, independent woman of the earlier piece, but it is likely a truer depiction of Uzbek women in the 1920s. Compare these with the images of veiled women attending a new school or the Turkmen village women watching children at a communal crèche. 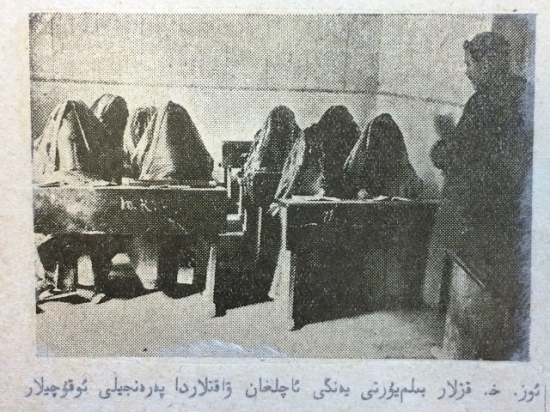 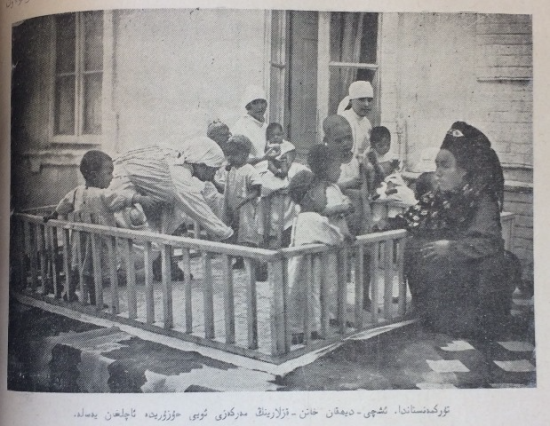 The reality of Central Asian women was evidently less rosy and progressive than the image promoted by Moscow and local Communist Party cadres. That utopia, apparently, belonged to the generations yet to come, as in the scene of new graduates observing a science experiment. These girls are dressed as their Russian counterparts in Moscow or Leningrad would have been, and they demonstrate the manner in which the construction of a new Soviet society would involve the importation of social and cultural norms from the centres of Soviet power, rather than a liberalization of local contexts and restraints. 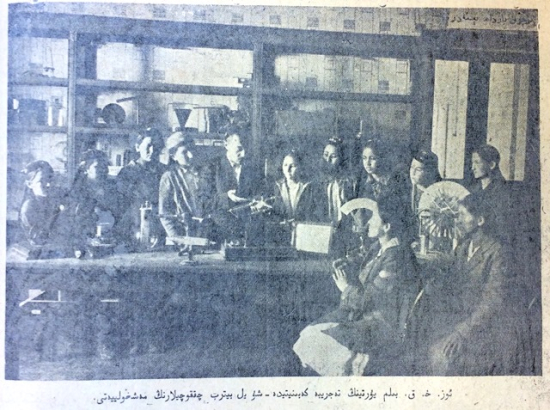 Foreign Asian women were also featured in articles about liberation, albeit in a different context. The piece from No. 11-12 that follows the exposition of women’s participation in the workforce looks at ‘The Family Question in Tibet (Mongolia)’ . The work contains information that surely would have shocked many conservative women in Central Asia, including socially sanctioned pre-marital sexual relations and fornication, and female as well as male polygamy. It also recounts in detail marriage customs, education patterns and inheritance laws among the peoples of Tibet, as if to acquaint the girls and women of Central Asia with their sisters abroad. Similar articles about the women of China and Java and the girls of India would lead us to believe that Yangi Yo’l replicated a common Soviet strategy: building class-based solidarity among the dominated peoples of the world with Moscow, or at least the USSR, as the lynchpin of resistance. 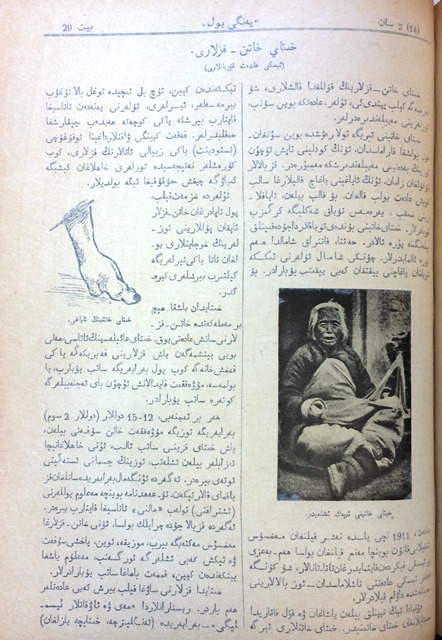 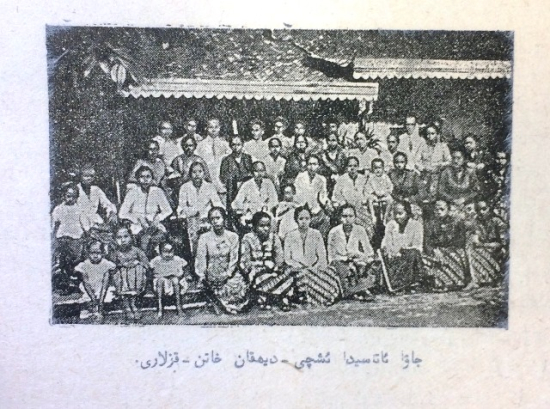 The Women and Girls of Java.

In general, there is not much in Yangi Yo’l that we would identify as typical of a contemporary women’s magazine. There are articles about women’s social status, the education of girls, the eradication of child marriage, domestic issues and hygiene, but these are not the core of the publication. Much of the content is taken up with standard class warfare writing tinged with gender issues: the working woman fighting the faceless bourgeoisie and beys; elegiac poetry about Lenin and his importance for proletarian and peasant women; and the meaning of land reform for women workers. They fight for space with articles that might be classified more as general knowledge than women’s issues. These include pieces on the indigenous peoples of the Indian Ocean and an explanation of solar eclipses; an account of the Paris Commune; an exposé on climate and its science; and the wonders of Tutankhamen’s tomb. As much as the periodical was intended to educate and elevate women, it was also a means of broadening their horizons, introducing them to a common (largely Western) culture, and to entertain them with stories of the fabulous and awe-inspiring.

The Library’s collections of Yangi Yo’l do not extend past 1927. Indeed, it is unclear if the periodical continued to be published past this date. This dearth of information deprives us of knowing how the presentation of women and their role within the new Soviet society changed once Joseph Stalin cemented his grip on the reins of the Communist Party. What we do have, however, is a window onto the tail-end of a grand – and perhaps naïve – experiment that sought to remodel Central Asian women according to the prototype of the ideal revolutionary proletariat.