On 26 May 1896 (14 May old style) Nicholas II was crowned ‘Tsar of all the Russias’ in the Cathedral of the Dormition in Moscow. Nicholas had acceded to the throne in November 1894, on the death of his father Alexander III. The long period between his accession and coronation was not unusual in Russia. It allowed time both to mourn the previous Tsar and to prepare the new ruler’s coronation.

By this time in the history of the Romanov dynasty a coronation involved a long and elaborate series of events and festivities. A lavish souvenir album, published by the Russian Ministry of the Imperial Court, both captures and reflects the scale and grandeur of the coronation and accompanying events. It is illustrated with photographs and with drawings in both black-and-white and colour, and the pages of text include decorative borders and attractive vignettes. The British Library’s copy of the album is one of 350 published in French. It was originally presented to one Colonel Waters who later donated it to the then British Museum Library. Waters attended the coronation as attaché to Arthur, Duke of Connaught, the official representative of the British royal family. His handwritten note records that the Duke and other British dignitaries also received copies. 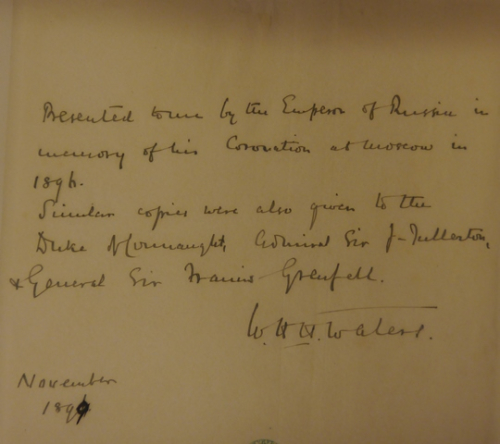 Colonel Waters’ handwritten note recording the provenance of the album

Some of the pictures in the album show the solemnities of the actual coronation ceremony: 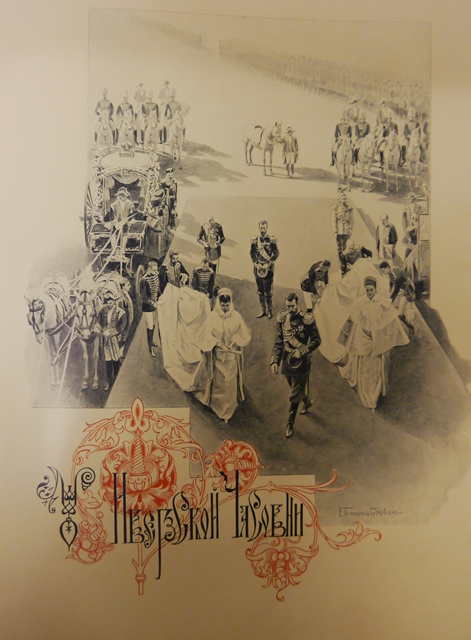 Above: The Tsar and Tsarina arrive at the Cathedral. Below: The Coronation regalia, and images from the service 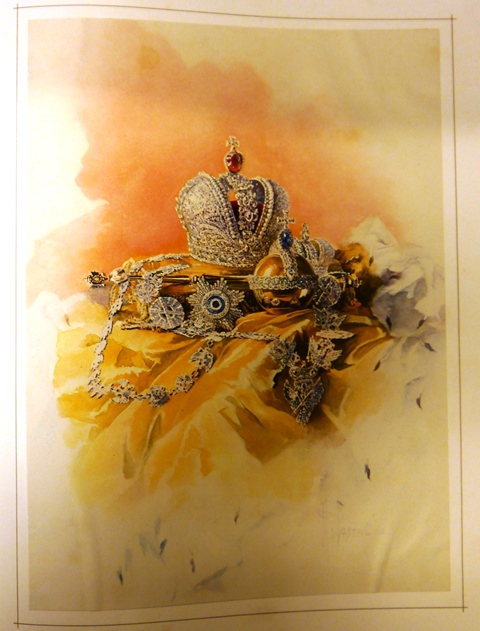 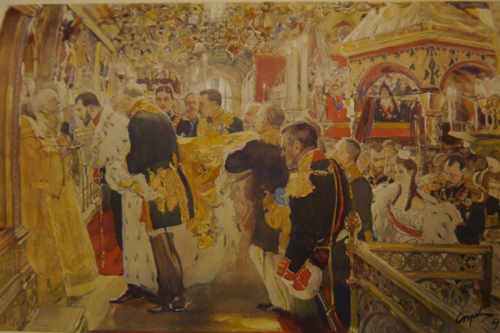 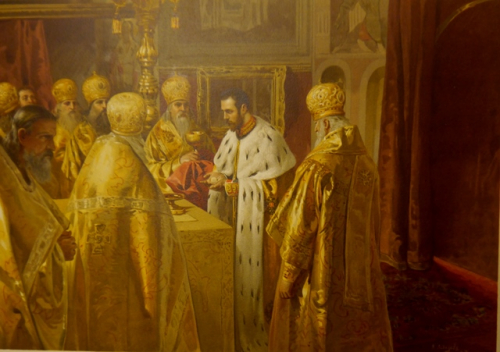 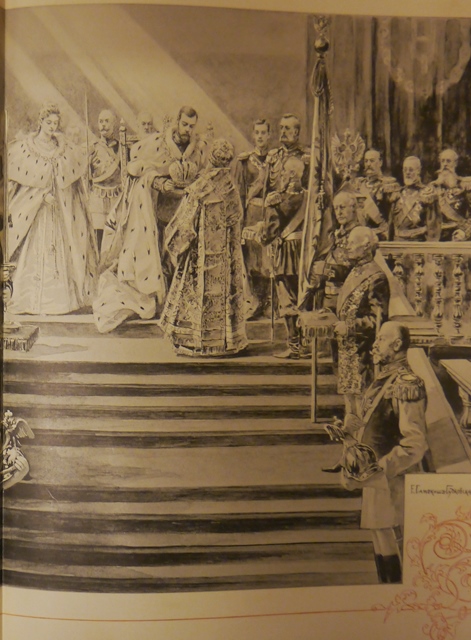 Other images show the celebrations that continued over the following days. There are reproductions of menus for formal dinners and programmes for theatrical performances: 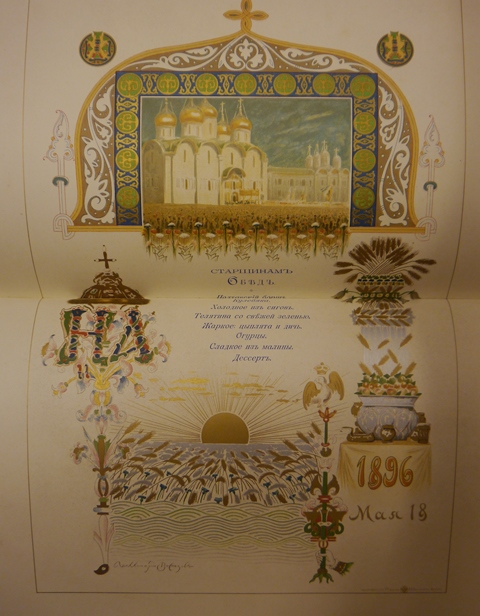 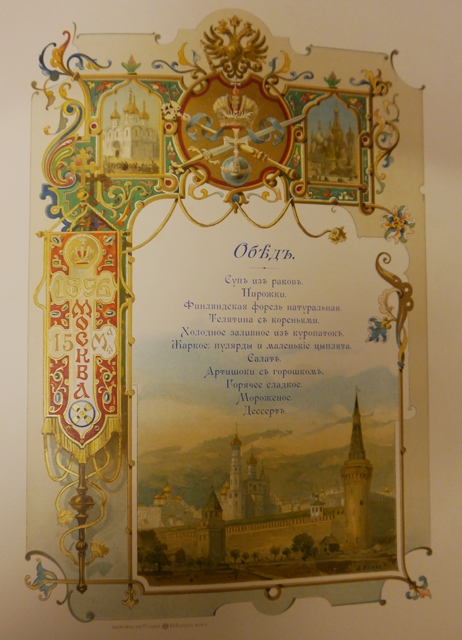 There is even a page illustrating some of the invitations to these and other events: 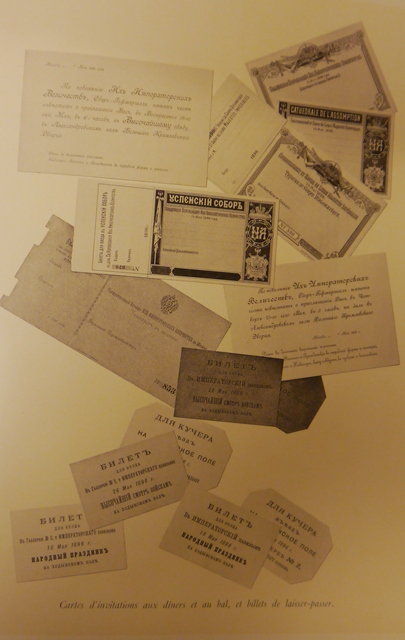 Most of these events, like the coronation service itself, were largely reserved for royalty, aristocracy and visiting dignitaries. But there were also festivities laid on for the wider populace. Contemporary paintings and photographs show crowds gathered to watch the processions to and from the cathedral, and on the night of the coronation people thronged to watch as the Kremlin was illuminated. 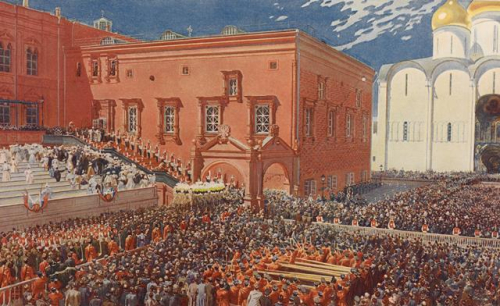 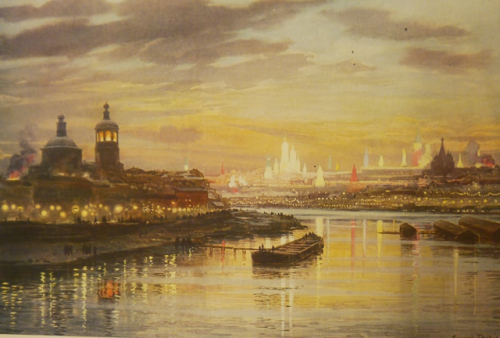 Four days later another crowd assembled for a planned ‘people’s feast’ and celebration on the Khodynka field in Moscow. Gifts of food, drink and souvenirs were to be handed out and the Tsar and Tsarina would appear before the people. But this supposedly joyous event turned into an unprecedented tragedy when rumours began to circulate that the gifts were running out. There was a rush towards the souvenir booths and in the ensuing stampede over 1300 people were trampled or crushed to death and a similar number injured. 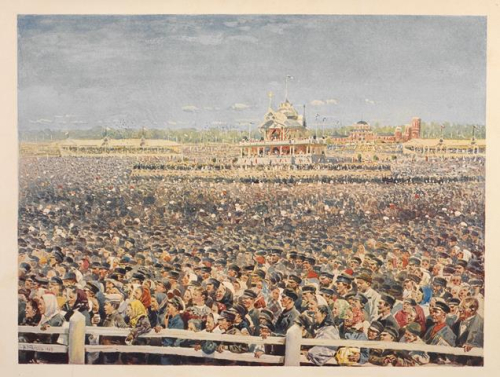 The packed crowd at Khodynka field

The royal couple were shocked to hear of the tragedy. They promised compensation and assistance for the bereaved and wounded and later visited some of the casualties in hospital. But the same evening they also attended a lavish ball at the French Embassy. Nicholas had wanted to cancel in the light of what had happened, but his advisors persuaded him not to. The Tsar’s instinct was wiser in this case: his attendance at the ball was seen as a display of callous indifference to the deaths of ordinary subjects. And whatever his personal feelings, he continued with the planned round of dinners, receptions and balls in the following days. 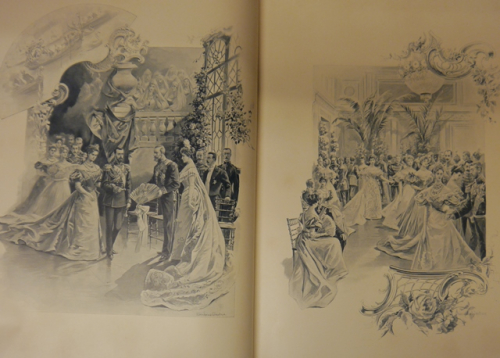 The Tsar and Tsarina arriving at a ball

The coronation album shows the world of the Russian Imperial court at its most elegant, celebrating the power and glory of a dynasty. But the very celebrations it records were tainted by a tragedy which, with hindsight, seems like an omen of greater upheavals and disasters to come. This would be the record of the last Imperial coronation in Russia’s history.

Mary Hickley, Gold, glitter and gloom: recollections of the Coronation of Czar Nicholas II and later travels in Russia, with a foreword by Brenda Marsault (Devon, 1997)  YC.1998.a.242 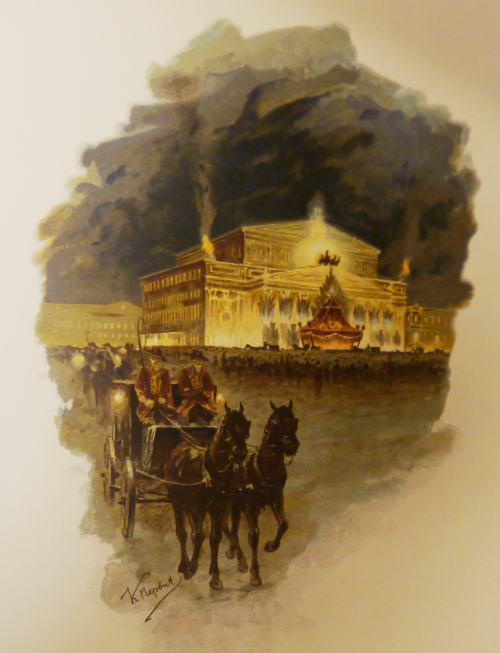