Dmitrii Moor interrogates: Have *You* Bought Your Ticket?

One of the main founders of Soviet political poster design, Dmitrii Orlov was born in 1883 in Novochekassk to the family of an engineer. In 1898 the family moved to Moscow. Although the young artist did not receive a systematic training, he started publishing caricatures in the satirical magazines that thrived during a short period after the first revolution in Russia in 1905. Early in his career, Orlov adopted the pseudonym D. Moor, alluding to Karl Moor, one of the protagonists in Friedrich Schiller’s romantic play The Robbers.

Having started as a caricaturist in satirical magazines, Moor was very much influenced by the German satirical publication Simplicissimus (British Library LOU.F459) and the Norwegian artist and designer Olaf Gulbransson, known for his clear lines and emphasis on linking verbal and non-verbal messages. Moor’s artistic style also incorporated imagery from silent films with their exaggerated emotions, which can be seen on this film poster: 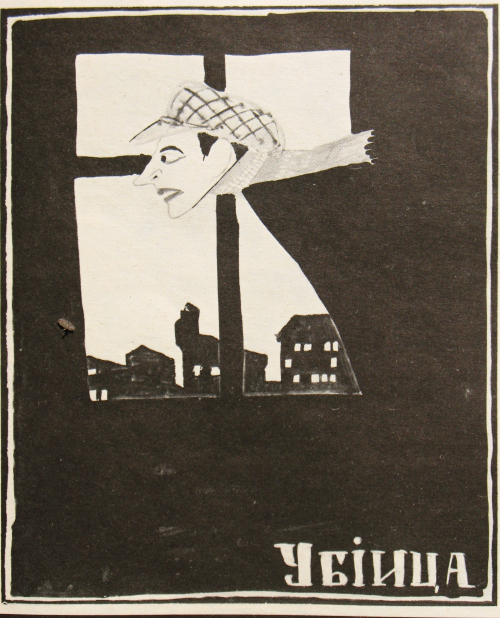 It is interesting that he returned to a similar style in the 1930s: the worker on this poster bears a striking resemblance to the criminal from the film poster: 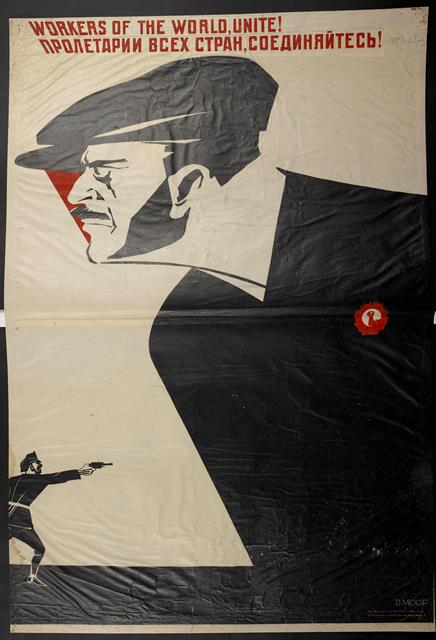 Today Moor is probably best known for his famous Red Army Recruitment poster of 1920, which appears on the poster for our current exhibition, Russian Revolution: Hope, Tragedy, Myths. Moor is  also considered one of the main founders of that unique area of Soviet art – political poster design. His other striking  posters, well known to Soviet audiences, include ‘Wrangel is still alive! Finish him off without mercy!’ and ‘Be on Your Guard!’ 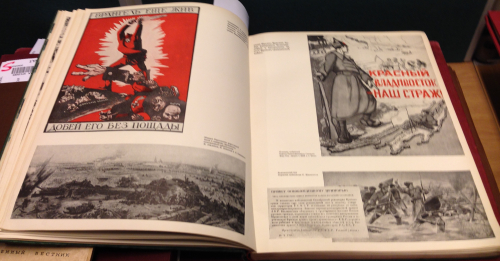 ‘Wrangel is still alive! Finish him off without mercy!’ (left), as reproduced in the album Krasnaia Armiia (Moscow, 1938) designed by Alexander Rodchenko and Varvara Stepanova. Cup.1247.dd.20. 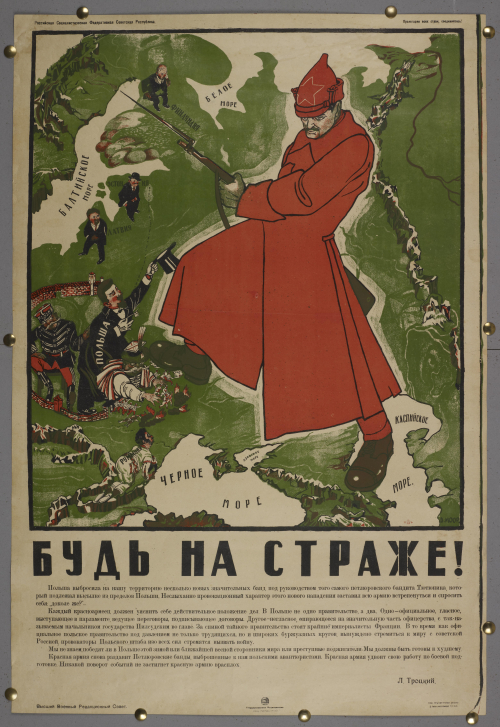 Here the right shoulder and raised leg of the Red Army soldier actually become the western state border, and thus the soldier personifies the state. His body is the body of Soviet Russia (his back rests against and fuses into the Urals, depicted as the bony ‘spine’ of the country – in Russian the same word means both ‘spine’ and ‘mountain range’). The vitality and resilience of the state is equated with the strength and will of its citizenry-in-arms.

Moor’s Alphabet for a Red Army Soldier, published in 1921, is a small book of cartoons intended to teach soldiers literacy as such and ‘political literacy’ at the same time: each letter is illustrated by a picture emphasising the special mission and the triumphs of the Soviet forces. The letter ‘G’ is the initial letter of the Russian word goret’ (‘to burn’), and the inscription to this picture reads: ‘The Earth burns with a fire lit by the worker’s hand.’ Trotsky and the other Bolshevik leaders hoped to instil in the Red Army a sense of historic mission, and an understanding that it was not simply a conventional national army but the custodian of world revolution. In the image for the letter ‘IA’ (Я), which also means the pronoun ‘I’ in Russian, the artist emphasised the idea of the new world and the new man who from now on will dominate in space and time for the next century: “The new Man has come! Long live the century of the Commune!”: 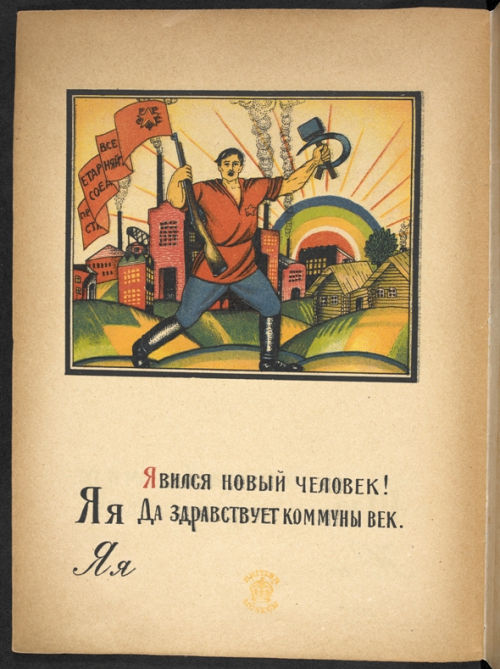 And there are examples of Moor’s caricature style, where enemies of the Soviet state look miserable and laughable. However, in most of the cases Moor uses the narrative and graphical themes that were very common and reproduced in many variations, such as Lenin sweeping the counter-revolutionary elements out of the country or a collection of ‘typical’ enemies opposing the new way of life. 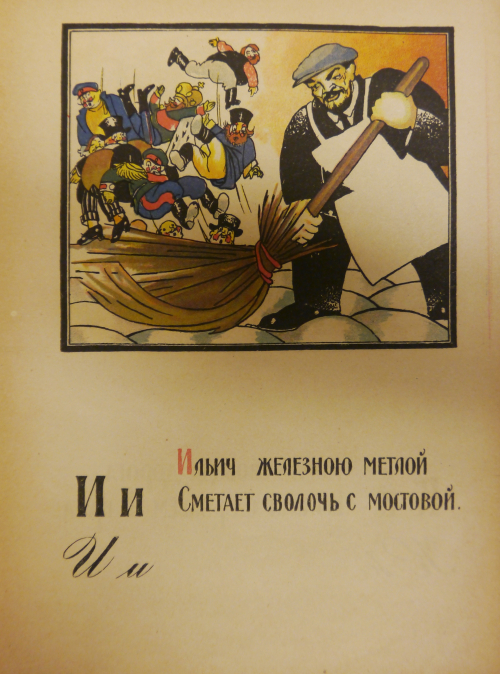 In the 1920s Moor worked for the anti-religious satirical newspaper The Godless and its reincarnation as the satirical magazine The Godless at the Workbench. The secularization of society and promotion of atheism was a crucial element of the ‘cultural revolution’ desired by the Bolsheviks, as Orthodox Christianity had been a pillar of support for the Tsarist state. Under Stalin anti-religious propaganda soon became quite aggressive. In 1925 the League of Militant Atheists, a volunteer organisation that promoted anti-religious views, was formed. In this image the peasant is sneezing out his religious beliefs under the supervision of the worker. 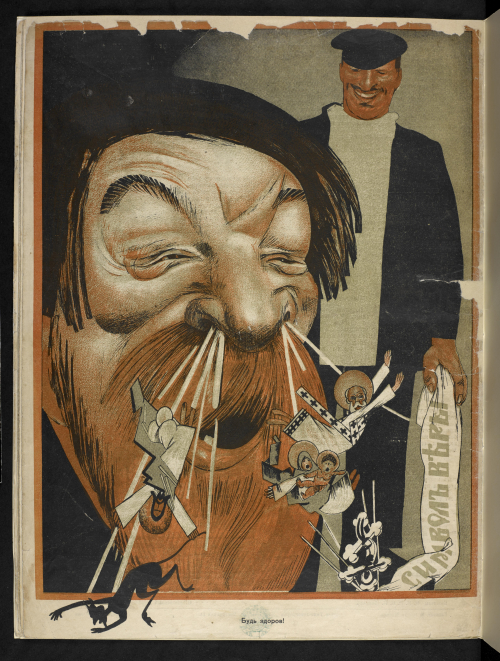 Many art critics compared the aesthetics of Moor’s posters with the aesthetics and compositions of Sergei Eisenstein’s films and this is this is very true, as Moor was always thinking about perception of his works. For example, he wrote that a poster artist should not only be a complete craftsman in graphics, but also analyse the situation in which his art would be seen. He suggested that a poster artist should know the speed with which passers-by walk, the width of the streets in his town, the position of lights in the evening and many other things. It is not surprising then that his piece of agitation art invites you – or commands you – to come to our exhibition.