In the current debate about the reintroduction of vanished species into their former habitats, apologists for the wolf often cite the species’ sophisticated social hierarchy and the benefits of predation in restoring the balance of nature in defence of a creature which, they claim, has been unjustly maligned. It is all too easy to forget that at the time when Perrault was writing fairy tales such as  ‘Little Red Riding Hood’ and ‘Hop o’my Thumb’, the wolf who features so ominously in them was not merely a fanciful threat. French parish registers throughout the 17th and 18th centuries record numerous burials of those who had fallen prey to wolves, with, in many cases, only pitiful fragments left to inter.

Although these deaths were a sadly frequent occurrence which only disappeared with the gradual extermination of wolves in France throughout the 19th and early 20th centuries, one outbreak attracted particular notice because of the extent and savagery of the attacks. The culprit was the notorious ‘Bête du Gévaudan’ which terrorized the Margeride Mountains in south-central France between 1764 and 1767. Over a century later, when Robert Louis Stevenson visited the region, he noted in his Travels with a Donkey in the Cévennes (Boston, 1879; 10109.n.63) that the inhabitants still recalled the terrible events and warned him against camping out because of the danger of wolves. The depredations of this mysterious creature have provided material for much speculation and also for some bizarre treatments of the episode, from Élie Berthet’s historical novel La Bête du Gévaudan (Paris, 1869; 12517.bbb.23; cover above) to Christophe Gans’ film Brotherhood of the Wolf (2006), where its ravages are attributed to a sinister religious cult. However, they have also been more systematically examined by historians and zoologists, and particularly by Jean-Marc Moriceau, an authority on French agricultural history (La bête du Gévaudan: 1764-1767, Paris, 2008; YF.2010.a.19761). Initially interested in the impact of the Beast’s activities on the rural economy, he went on to write a study of wolf attacks in France (Histoire du méchant loup: 3000 attaques sur l'homme en France (XVe-XXe siècle), Paris, 2007; YF.2009.a.3501) and to edit the proceedings of a conference devoted to relations between man and wolf (Vivre avec le loup? Trois mille ans de conflit, Paris, [2014];YF.2016.a.8804). 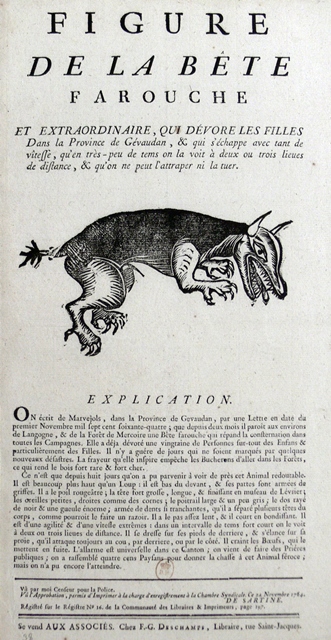 Contrary to the popular images of starving wolves prowling through snow-clad landscapes, the Beast claimed its first victim, Jeanne Boulet, just short of her 14th birthday, on 30 June 1764. The parish priest of Les Hubacs, recording her burial the following day, attributed her death to  ‘la Bête féroce’, suggesting that it had achieved some notoriety. In fact it had already made at least one previous attack, foiled by the cattle which the intended victim was guarding. Moriceau notes that while flocks of sheep were generally supervised by experienced shepherds with formidable sheepdogs armed with spiked collars, the practice of sending boys and girls to accompany the cattle to pasture rendered them especially vulnerable. In most of the fatal attacks which occurred over the next three years (up to 113, according to one source), the victims were young; of 79 cases cited where the age is recorded, 63 out of 79 were under 20. The spring and summer, when the rural population was engaged in outdoor pursuits in the fields and vineyards, offered special opportunities to a predator lurking at the edge of a forest or lying low in a cornfield. 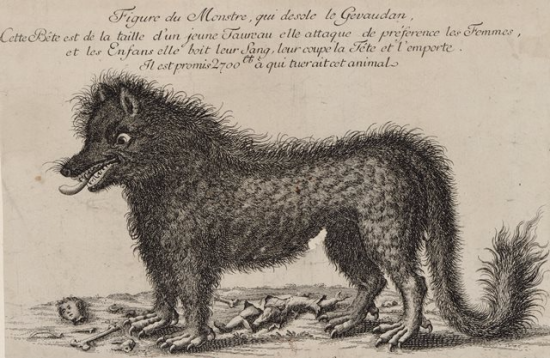 Another contemporary view of the ‘monster’, reproduced in Du sang dans la montagne.

As the toll increased, even grown men were afraid to venture forth unarmed, leading to appeals for the ban forbidding the peasantry to carry weapons to be lifted. Fears were heightened by reports of the creature’s unusual size, strength and appearance, leading to rumours that it was not a wolf at all but a bear or a hyena escaped from the King of Sardinia’s menagerie. As even expert hunters failed to shoot it, it was claimed that it was no ordinary animal but a werewolf, invulnerable to firearms or to poison (more bizarre suggestions include a wolf/dog hybrid or, according to Pascal Cazottes in La bête du Gévaudan enfin démasquée? (La Motte d’Aigues, 2004; YF.2005.a.9199), a prehistoric Hemicyon.

This led to intervention by Louis XV himself; on hearing of the heroism of young Jacques Portefaix, who successfully defended himself and seven companions when attacked on 12 January 1765, he not only rewarded them financially but decreed that the Crown would send assistance to kill the Beast. This met with mixed success; the royal louvetiers were resented by the local residents on whom they were billeted, especially when their efforts achieved nothing. However, when on 20 September a large wolf was killed by François Antoine, the king's arquebus-bearer and Lieutenant of the Hunt, it seemed that he had exterminated the Beast, especially as several survivors recognized it by scars inflicted during attempts to beat it off. The stuffed specimen was displayed at Versailles, and Antoine fêted as a hero, but by December 1765 renewed attacks confirmed that the story was not yet over.

In May/June 1767 alone eight more victims perished, including a Carmelite nun and several young cowherds. On 17 June the burial of the last, 19-year-old Jeanne Bastide, was recorded by the parish priest of Binière. The following day the young Marquis d’Apcher organized a hunt and set out with a pack of hounds and around 300 huntsmen and beaters, including 12 named marksmen, one of them a farmer called Jean Chastel. At 10.15 on the morning of 19 June the Marquis sighted his quarry followed by its mate, and gave the order to loose the hounds. Chastel fired, and the Beast of the Gévaudan fell dead.

Somewhat anticlimactically, the corpse rapidly decomposed in the hot weather and could not be exhibited, and in contrast to Antoine, Chastel, on arrival at court, received only a modest reward of 72 livres. But he had earned the lasting gratitude of his neighbours for rescuing them from three years of terror, and 250 years later the surrounding area prepares to commemorate the events of June 1767 under the slogan ‘Fête la Bête!’