Due to the country’s turbulent history Polish collections are spread across libraries, archives and research institutes all over the world. The programme called The Registration of Polish Collections Abroad, carried out at the initiative of the Polish Ministry of Culture and National Heritage in the years 2006-2014, included work on the registration and documentation of Polish material in foreign libraries. To summarise the results of the complex research undertaken by librarians and scholars in various European, American and Australian institutions holding Polish book and manuscript collections, an international conference was organised by Warsaw University and the Ministry in Warsaw on 25-26 May 2017. The papers covered a wide range of issues, from cultural heritage in dissolved monasteries to the looted collections in Germany and Sweden, as well as the Polonica holdings of national libraries such as the Library of Congress, Bibliothèeque nationale de France and the British Library. 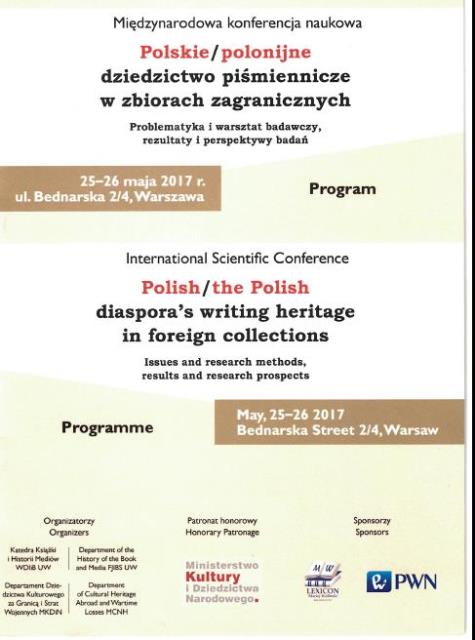 The programme for the conference (Designed by Katarzyna Seroka, University of Warsaw)

A significant proportion of Polish material can be found in Ukraine, Belarus and Lithuania – once part of the Polish-Lithuanian Commonwealth. Speakers discussed the problems related to the Polish book and manuscript collections scattered in public, academic and monastery libraries and archives. The focus was on the historical perspective of these collections and their use in current research. Many Nazi-looted objects of Poland’s cultural heritage are still in the possession of a few German institutions and are now the subject of provenance research and consequently their restitution. For example, the Staatsbibliothek zu Berlin has so far returned about 10,000 items to their legal owners. In Sweden there are innumerable Polish cultural artefacts, including printed material and manuscripts, which were looted during the Swedish invasion of Poland in the mid-17th century. The Swedish plunder resulted in the worst cultural losses in the entire history of the country. However in the 18th century Poland renounced any claims to its treasures in Sweden, so they cannot now be the subject of restitution negotiations. A separate paper discussed restitution issues in the light of international regulations.

The collection of Józef Ossoliński  founded in Lwów (nowadays Lviv) in the 19th century is a different case. It is an example of private property donated by the collector to the Polish nation and as such is part of the country’s heritage. After the border changes in 1945, only a part of the collection returned to Poland. Since the 1990s it has been the topic of recurring discussions between the Polish and Ukrainian authorities. The German collection of books and manuscripts removed from the Prussian State Library for safe keeping during the Second World War was found in Silesia, the former German territory incorporated into Poland after the war. The collection is considered by the Polish authorities only as a “deposit” against cultural losses inflicted on Poland by Germany.

The Ministry of Culture and National Heritage coordinates the projects with the aim of producing online databases of the dispersed Polish collections – either in digitised form, in the case of printed material, or as a source of information on other cultural objects. These include Polonijna Biblioteka Cyfrowa (‘Poles Abroad Digital Library’)  containing 7,500 titles, and the recently launched portal Polonika  which provides information on objects of cultural heritage abroad.