‘A Man of Throbbing Vitality’: Leon Trotsky and the ‘Leatherites’

In a recent article for the Guardian, the ‘weird fiction’ author China Miéville raised the issue of historian Orlando Figes’s ‘disapproving fascination’ with the leather jackets habitually worn by Bolshevik revolutionaries during the period of the Civil War. Figes’s fascination with their leathers and the ‘macho culture’ they signified is not just a personal quirk, but was a key element in the militant image of Bolshevism established in opposition to the suited politicians of the other parties in the Russian Revolution.

More than any other iconic figure of the revolutionary period, the founder of the Red Army Leon Trotsky has become associated with this uniform of leather, a radical departure from his dapper intelligentsia style of fashion in the pre-1917 years. A brief clip of the revolutionary in military garb can be found on the Getty Images website. While Trotsky wore an imposing suit of black leather, the guards on the famous train from which he commanded the war effort were reputedly kitted out in similar uniforms of red. Trotsky himself attributed the Bolshevik craze for leather to the lesser known figure Yakov Sverdlov, a leading Bolshevik who died of illness in 1919:

In the initial post-October period the Communists were, as is well-known, called “leatherites” by our enemies, because of the way in which we dressed. I believe that Sverdlov’s example played a major role in introducing the leather “uniform” among us. At all events he invariably walked around encased in leather from head to toe, from his leather cap to his leather boots. This costume, which somehow corresponded with the character of those days, radiated far and wide from him… 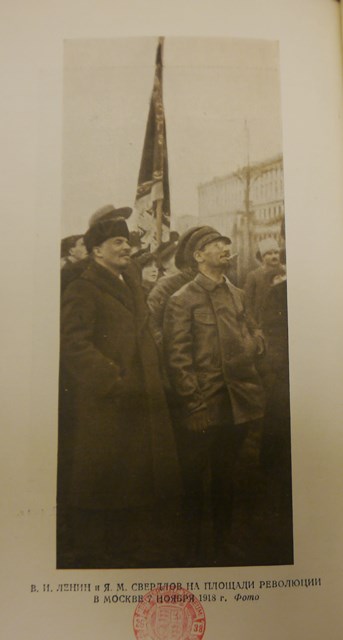 A 1918 photograph of Lenin with Sverdlov, in his leather jacket, from Tsetsiliya Samoilovna Zelikson-Bobrovskaya, Yakov Mikhailovich Sverdlov (Moscow, 1938) 10797.b.7.

The leather-look seems to have worked for Trotsky. British visitors to revolutionary Russia were often struck by his sense of fashion and personal charisma. Ethel Snowden, a figure on the right-wing of the Independent Labour Party (a section of the Labour Party which had taken an anti-war position during the First World War), was one such unlikely admirer. She was the wife of the austere Philip Snowden, the man who would become Labour’s first Chancellor of the Exchequer in the minority government of 1924 and again in the ill-fated government of 1929 – certainly no Bolshevik sympathiser. 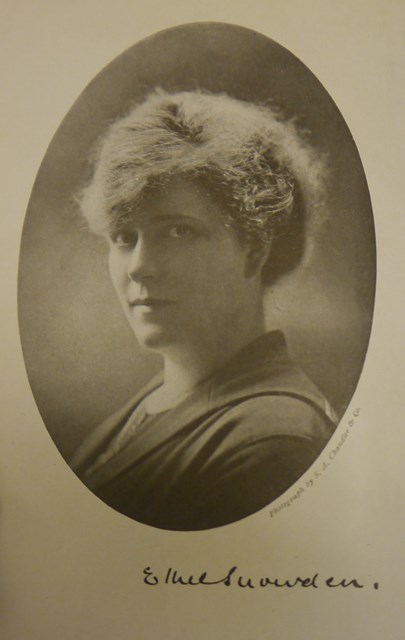 Ethel Snowden had been selected as a member of the Labour Delegation to Russia of 1920, which sought to establish the facts about the new Soviet state through the distorting mists of propaganda and counter-propaganda from both its enemies and admirers. During the visit she had the opportunity to share a box in the theatre with the ‘remarkable fine-looking man’ Trotsky, enjoying a performance of Borodin’s Prince Igor. Trotsky has the reputation of a rogue, his affair with Frida Kahlo during his more settled post-revolutionary years is well-known having been depicted in the 2002 film Frida, but in Snowden’s account in her book Through Bolshevik Russia he comes across as a devilish flirt even in the midst of heavy civil war:

At one point in the performance there came a tender love-scene.
“There,” said Trotsky turning to me and speaking in English for the first time, “is the great international language.”
“Yes,” I replied, “you are right. But there is also another – Art. These two great international languages of Love and Art will unite the world in peace and happiness at last.”
I should think Trotsky is a man of throbbing vitality and of strong feeling; once of splendid vision.

The philosopher Bertrand Russell was also in attendance and was, if anything, even more struck. He wrote a description of Trotsky at the theatre in his journal entry for 17 May 1920:

Very Napoleonic impression. Bright eyes, military bearing, lightning intelligence, magnetic personality. Exceedingly good-looking, which surprised me. Would be irresistible to women, and an agreeable lover while his passion lasted.

Russell’s published account repeats much of this description, but probably knowing how prudish the English can be he chose to omit the final clause. Despite Trotsky’s personal appeal, both figures would become committed anti-Communists following their trip, and Ethel Snowden in particular was attacked by Communists as a traitor to the cause of the working class. Although they managed to bring back a wealth of material from the Soviet state, much of which has found its way to the British Library, the Labour delegation did not carry the fashion for leather back to the British working class movement, which long retained its preference for impeccably proletarian and anti-militaristic cloth flat caps.