The concept of a unified national language is very much a product of the modern era. Since antiquity, commentators, authors, scribes and others have complained about the quality of language use in literary and scholastic circles and everyday life. Such gripes motivated the creation of highly curated liturgical and sacred languages, such as Classical Arabic or Sanskrit. Nevertheless, the creation of a norm against which transgressions could be measured, and its adoption as a tool of the state – as opposed to a religious institution – are novelties of the last few centuries. Profane language tinkering was undertaken with vigour across much of Europe in the 19th century, from French to Hungarian and Greek. It was not until the 20th century that the trend took minority European languages and non-European idioms by storm. Among the Turkic peoples of the Russian Empire, it was the advent of Soviet hegemony that turned language reform from a topic of discussion among intellectuals into stark reality.

The Language Issue, as it is often known, was a subject of frequent conversation among Turkic intelligentsia in the late 19th and early 20th centuries. Jadidists  and Qadimists – so called because of their adherence to new or old methods of education – fought over the means and content of education, including language. It was during the first few years of Soviet power, however, that such actors were enlisted to help delineate linguistic boundaries and compile “scientific” knowledge about speech communities across the Union. 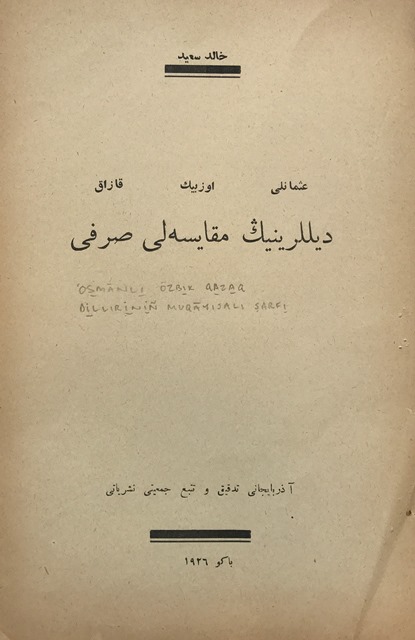 Bekir Çobanzade, for example, wrote a grammar of the Kumyk language. Xalid Sǝid Xocayev’s Comparative Conjugations of the Ottoman-Uzbek-Kazakh Languages (pictured above) is another case in point . These fed into the broader process of understanding and standardizing linguistic structures, which culminated at the 1926 All-Union Turcological Congress. The collection of articles prepared for the Congress, the Bulletin for which is held by the British Library, show the degree to which language issues and linguistic reform dominated the proceedings. 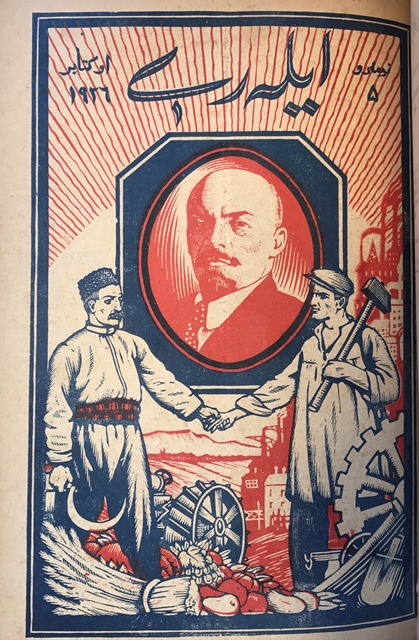 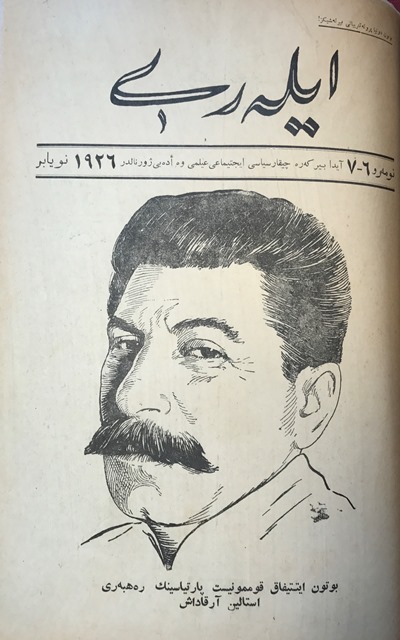 Along with linguistic reform came change in orthography and writing systems. A quick glance through Turkic-language publications from the first half of the 1920s shows that experimentation with different means of Perso-Arabic spelling was common. Crimean Tatar publications such as İleri  and Yeşil Ada demonstrate just how much writers dabbled in such matters. Despite discussing the standardization of such experiments at length, delegates at the 1926 Baku All-Union Turcological Congress eventually settled on whole-sale Latinization as the most efficient alternative. Thus, the ‘Uniform Alphabet’ was born. This particular Latin-based writing system aimed to give all languages within a particular language family the same grapheme for the same sound. It was based, in part, on earlier Tatar efforts at Latinization known as Yañalif, although it did also incorporated important innovations from other languages. Unlike European alphabets, where the English sound sh as is ship could be written sch (German), ch (French), sci (Italian), sz (Polish) or just plain s (Hungarian), all Soviet Turkic languages would now use ş. 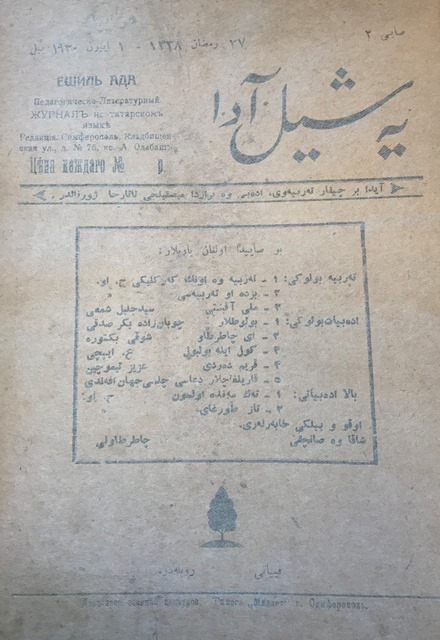 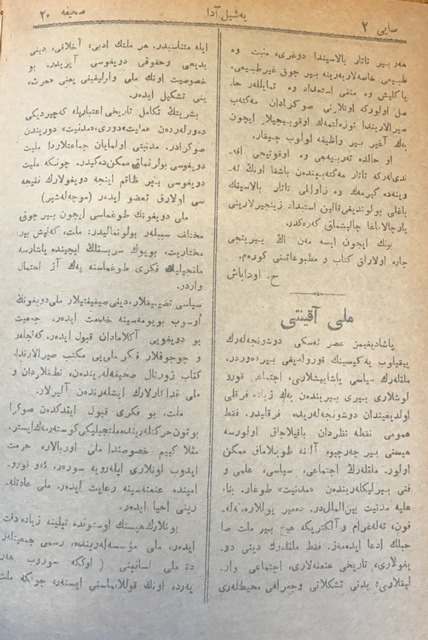 The Soviet authories used readers such as Jeni Turmuş and Jaş Kyc, both from Uzbekistan, to promote aggressively the new alphabet.  These formed part of mass education movements aimed at eradicating illiteracy as well as pre-Revolutionary epistemologies. 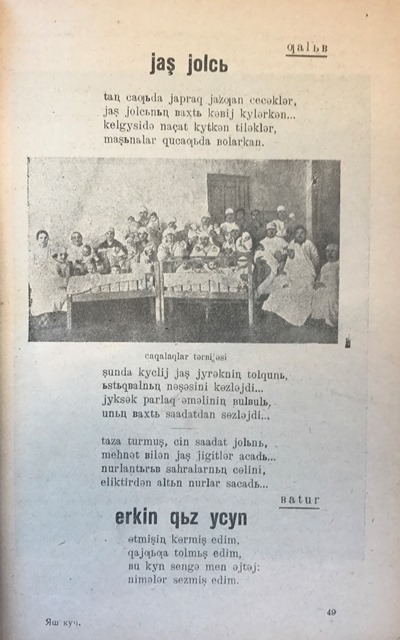 Even those members of the new élite who had actively opposed Bolshevik advances, such as Akhmet Baitursynov,  joined the effort. Baitursynov’s 1927 publication Alip-Ba (Zhanga Kural)  sought to teach students the new Latin orthography. It followed upon his efforts to compile a grammar of Kazakh, entitled Til Qural, in 1925. Together, they provided a complete corpus of texts for the fixing and propagation of Soviet Kazakhstan’s new national language. 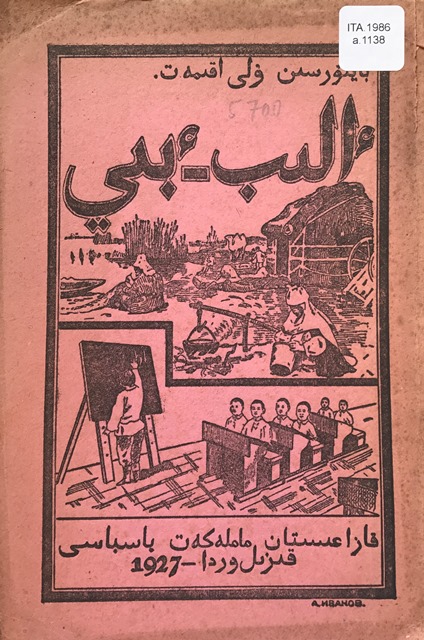 Orthographic standardization was informed by both a desire to simplify literacy and printing, and the Marxian belief that as humanity marched towards Socialism, languages and national cultures would merge into one. This humanity-wide kulturbund, united in its pursuit of socio-economic well-being, would no longer be divided by the bourgeoisie’s artificial distinctions of nationality, race or language. The Soviet authorities’ wish to help this process along among the Turkic languages is very much evident in an article entitled ‘Turkmen edebi dilining esaası yaghdayları’ (pictured below) from Tyrkmen Medenijeti . K. Bööriyif wrote the piece in 1930, which leads us to believe that it was, at least partially, influenced by the dominant ideology of Stalinism. In it, the author argues for the creation of a standard Turkmen language through the selection of “ideal” linguistic elements from various vernaculars. This is language management at the extreme, precluding the sort of linguistic unification that comes from literary production and socio-political changes, as occurred in Italy and Spain. Such a suggestion only adds to the overwhelming evidence the state’s push to imbue all aspects of Soviet life with Stalinist elements. 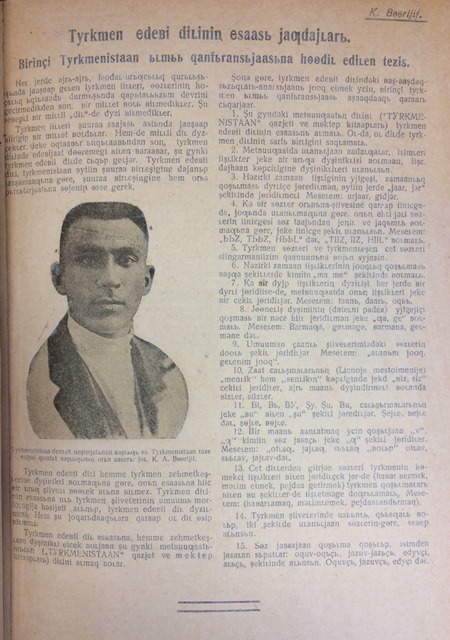 Language reform and management are tools utilized by a wide swathe of governments, not just totalitarian ones. What is unique about the Soviet experience, and the Soviet Turkic experiment in particular, is how all aspects of language came under scrutiny. The brief period of forced convergence in the 1920s and early 1930s came to an abrupt end around the time of the Great Purge, when Stalin employed terrible violence to cleanse the state and the country of perceived ideological enemies. Latin gave way to unique Cyrillic alphabets for each language at this point, and the creation of new linguistic standards lost steam. Today, the peoples of the Turkic republics of Central Asia, the Caucasus and Siberia live with the consequences of this turbulent period, while some – including the Uzbeks, Turkmen and most recently the Kazakhs – have sought to determine what would have happened, had the changes of the late 1930s never been enforced.