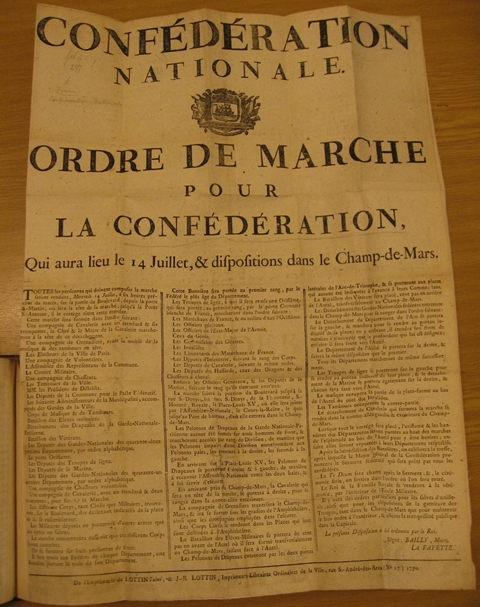 Last Friday, 14 July, the Library’s French Collections curators attended the annual celebrations of the “Fête nationale” at the French Embassy in London. While a current exhibition at the British Library is commemorating the anniversary of the 1917 Russian Revolution the national celebration of 14 July in France gives us the opportunity to provide a sweeping summary of the events surrounding the 1789 French revolution, highlighting the presence of a major collection of c. 50,000 French revolutionary books, pamphlets and periodicals in the library collections, along with primary sources originating from the library of King George III, and a collection of items (manuscripts and prints, as well as engravings and paintings) relating to the doctor, journalist and revolutionary Jean-Paul Marat, donated by his bibliographer, François Chèvremont, at the end of the 19th century. 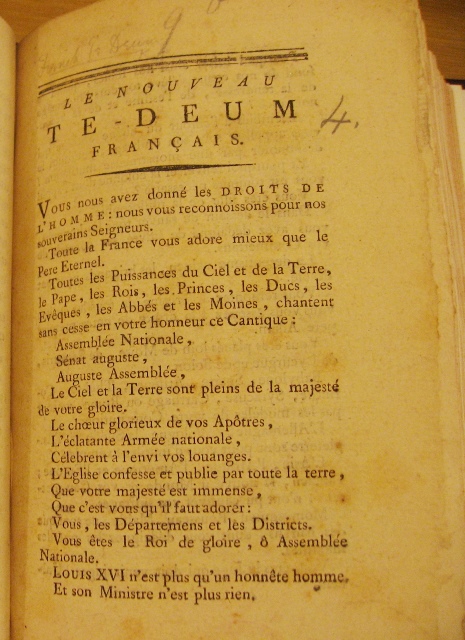 In May 1789, in the context of increasing financial difficulties in the kingdom of France, King Louis XVI summoned the Estates General (les états généraux), who met according to their ancient structure of Clergy, Nobility and Commons. An immediate, defining and most contentious issue was how the voting system was to be decided – by head or by Estate. In June, fearing that military manoeuvres around Versailles were intended to disband the Estates General, the Third Estate, together with members of the other two Estates declared itself to be the Assemblée Nationale and vowed, by means of the Tennis Court Oath, not to separate until a constitution had been written for France. By this act, the Assemblée Nationale declared itself to be the supreme legislative authority for a unified Nation-State called France (instead of a collection of provinces with different laws and customs) owing loyalty to the same monarch. 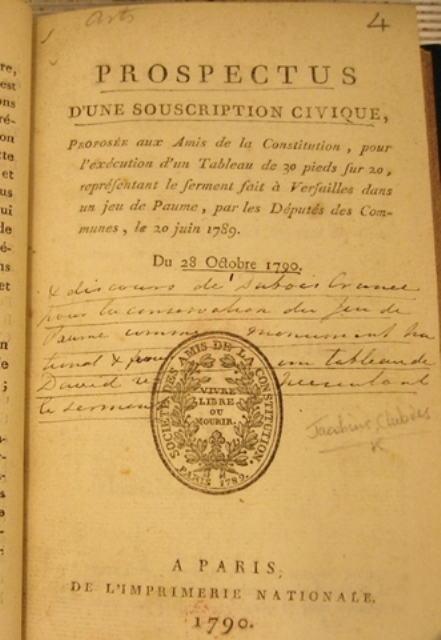 After the Paris insurrection, which involved the emblematic storming of the Bastille prison, on 14 July 1789, the National Constituent Assembly took a series of measures establishing major legal and administrative changes, promoting liberty, equality and fraternity, abolishing privileges and feudalism, and adopting the Declaration of the Rights of Man and of the Citizen. A first Constitution written by the National Assembly was accepted by the king in September 1791, sealing the end of the absolute monarchy; it was a period of governmental crisis and political discord and upheaval. In the summer of 1792, after the invasion of the Tuileries Palace by the Parisian people, Louis XVI and his family were imprisoned in the Temple prison. The monarchy was overthrown and a new constitution and government were needed. Elections led to the creation of the National Convention, which declared France a republic on 22 September 1792. About a year later, a new revolutionary calendar, replacing religious references with seasonal one, was adopted, using this date as its starting point. While France was at war with Austria and Prussia, Louis XVI, who may have hoped a foreign victory against the French army would restore the absolute monarchy, was tried for high treason by the Convention and beheaded on 21 January 1793. 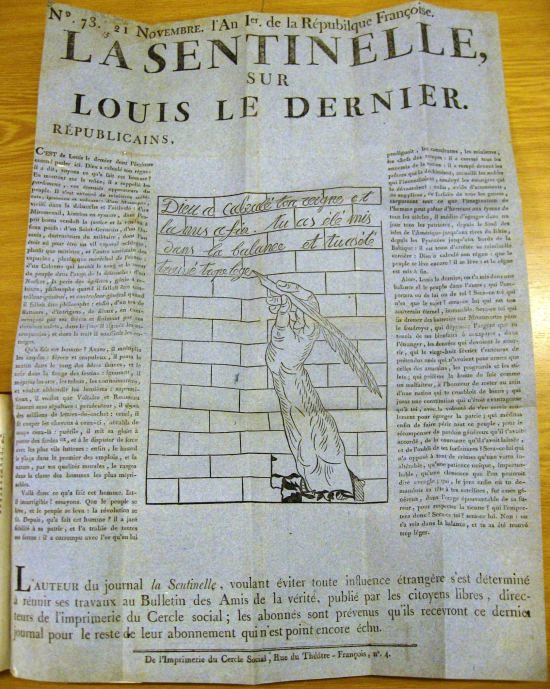 A new Constitution was proclaimed on 24 June 1793, the Constitution of the Year I, but it was not enacted: while counter-revolutionary movements spread, especially in the West of France, Maximilien Robespierre and members of the radical Moutain (Montagnards) party, after having ousted the moderate ‘Girondin’ members of the Convention, started a dictatorial reign of Terror led through the Committee of Public Safety. 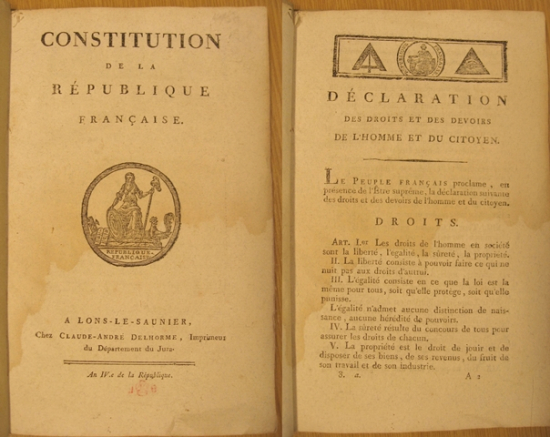 In autumn 1795, about a year after the fall and execution of Robespierre on 9 thermidor an II (26 July 1794), the new Constitution of the Year III established a new regime, the Directory. It was governed by five individuals, and established two chambers of Parliament (le Conseil des Cinq-Cents and le Conseil des Anciens). It dealt with wars inside and outside of France and lasted until Napoléon Bonaparte’s coup d’Etat in 1799, which was followed by the Consulate and Empire. 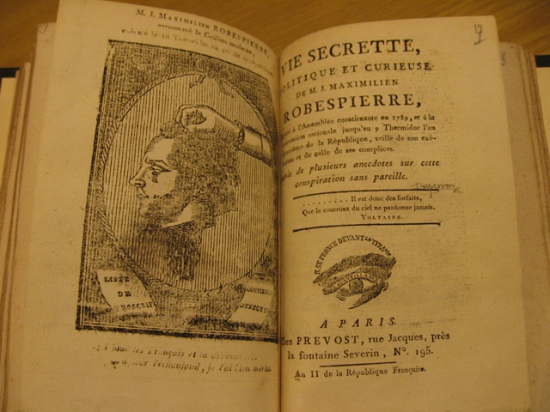 The collection of French Revolutionary tracts now in the British Library, the second largest in the world after that of the Bibliothèque Nationale de France, was acquired from the politician and writer John Wilson Croker in three stages in 1817, 1831 and 1856: each set starts with a different shelfmark F, FR and R, and is bound in a different colour, brown, red and blue. Croker was a devoted collector and bibliophile, who enabled the first large scale purchase of revolutionary tracts from a bookseller in Paris. The British Museum later acquired some of Croker’s own collection. 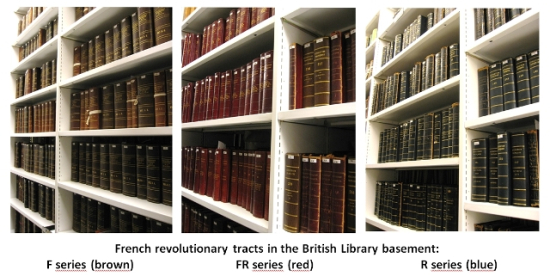 The world of print changed dramatically during and after the French Revolution: the intense political debates leading to the birth of the French republic, and the abolition of the ancien régime corporations removed restrictions on setting up presses. Both in Paris and in different cities, towns and regions of France, small presses were used by groups and individuals eager to share their views in the increasingly public debate, thus contributing to the emergence of a public opinion. 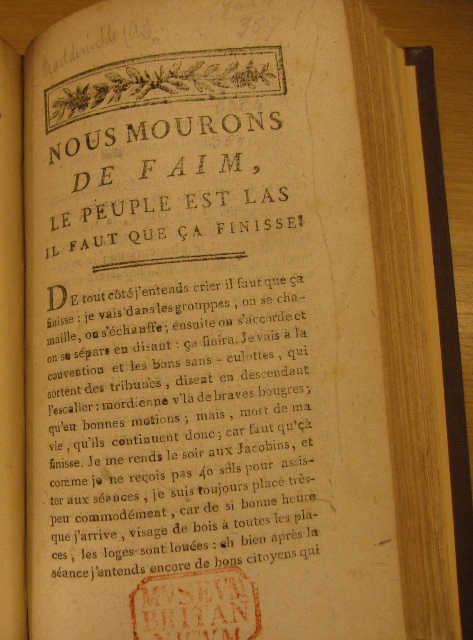 Pamphlets of various sizes could be printed cheaply and quickly in a standard format and disseminated in relation with current concerns and events. The British Library’s French revolutionary tracts, usually short pieces but occasionally involving longer texts (including the first French translation of Edmund Burke's Reflections on the Revolution in France, 1790, FR.327(5)), cover a variety of subjects, and in our collection are bound thematically, grouping political ideas and reports on the activities of public bodies such as the états généraux or the Assemblée nationale, economic thought and discussion of financial issues, the death penalty, military events, religious matters, revolutionary festivals... 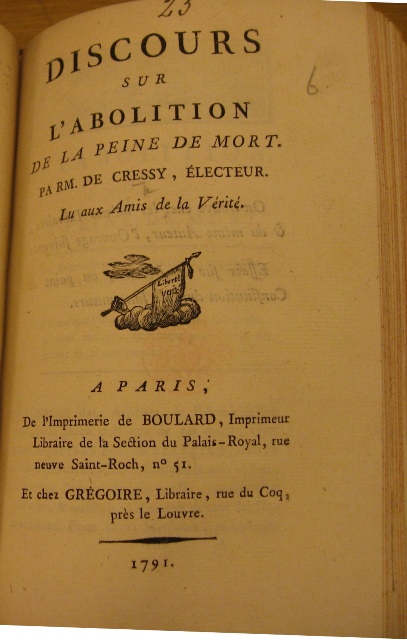 They bear witness to the development of new legislation, social change, power transfer and use of violence in this turbulent period. Under the Terror, many tracts were printed in defence of accused citizens trying to reach the committees in charge of their fate. The collection also includes many newspaper issues, such as L’Ami du Peuple (1789-93), written by Jean-Paul Marat, or the Journal des Amis de la Constitution (1790-91).

The three series of Revolutionary tracts are currently undergoing conservation to repair volumes whose bindings have been damaged by time and use. These books, periodicals and pamphlets, which tell the history of French constitutional government at the time it was formed, are a printed testimony to the growth, evolution and activity of a newly created Nation-State which owes its existence to a seminal event of the modern world. 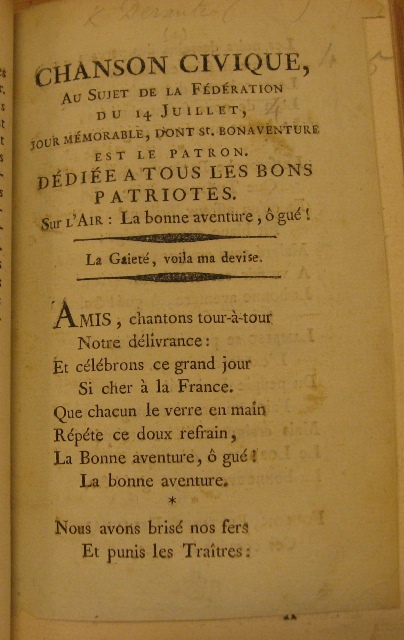