Books in the iconic King’s Library Tower offer the most publicly visible representation of early printed books in the British Library. Specialist, in-depth catalogue descriptions  help us know and use what is there, but one vellum-bound copy of a popular 15th-century work has somehow sat neglected on its shelves for a couple of hundred years. How can this be?

The copy of Modus legendi abbreviaturas has a shelfmark 166.i.21 but has no British Library catalogue record; this effectively means nobody has been in a position to know about its existence. The first printed page of Modus legendi abbreviaturas (166.i.21). The stamp used to identify King George III’s books is pressed over its first line of type.

Lists of books must be arranged meaningfully to be useful. Historically, many fashions and rules for description have been followed but key components are expected: authors and titles; the places and dates of printing and the name of the printer. A book’s title page is easily taken for granted – but how do you describe a book without the quickly accessible information contained on a title page or in a book’s colophon?

Modus legendi abbreviaturas is a reference book for studying Roman and Canon law, a glossary for unpicking the thousands of abbreviations, contractions and symbols used in Latin legal manuscripts and texts. It is, perhaps, the first manual of palaeography. More than 40 editions were printed in the 15th century alone; the first is thought to date from 1476.

Our copy that has lurked at 166.i.21 presents a problem because it is ‘Absque ulla nota’, i.e. it has no identifying marks such as printer, location or date. This may be one of the reasons why it was neglected. Past librarians could identify the work from the text but crucially could not specify where, when and by whom the book was printed. Entry for 166.i.21 in the Bibliothecae Regiae Catalogus

The Bibliothecae Regiae Catalogus compiled after George III’s death by F.A. Barnard and privately printed between 1820 and 1829, lists the book under the subject heading, ‘Jurisprudentia’ (its author was unknown at the time). Details about its 34 lines (of type) and 48 pages are given as distinguishing features. The shelfmark 166.i.21 is written in pencil but this information was apparently never carried over into the Library’s main catalogue.

Over the centuries, librarians and bibliographers have collated close studies of printers’ type to help identify where early hand-press printed works may have originated. Our copy here has a note in pencil, ‘Not in Panzer’, a reference to its absence from what was the first comprehensive attempt to catalogue incunabula, Georg Wolfgang Panzer’s Annales Typographici  (1793-1797).

As closer bibliographic study of print type and other evidence has progressed it has been possible to identify or estimate the people, places and dates associated with elusive ‘unsigned’ works. 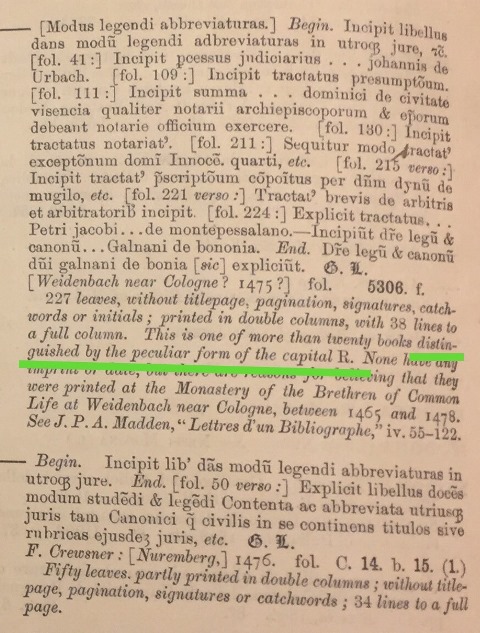 The beginning of the entry for the numerous editions of Modus legendi abbreviaturas in , ‘GK1’ - the first general printed catalogue of books in the British Museum, published in the 1890s. The attribution to the ‘R-Printer’ (now believed to be Adolf Rusch) is an example of how print types are used to identify or describe unsigned editions. The ‘161.i.21’ edition, in the collection for 70 years by this time, is missing from the record.

Research into books printed in the Low Countries suggest that the edition represented in the copy at 161.i.21 is the work of Gerardus de Leempt (active 1473-1488) and that it was probably printed in Utrecht, Nijmegen or even Cologne. De Leempt was a journeyman printer – first and foremost a skilled type-cutter – who collaborated with others to produce books. Few of his books were signed. 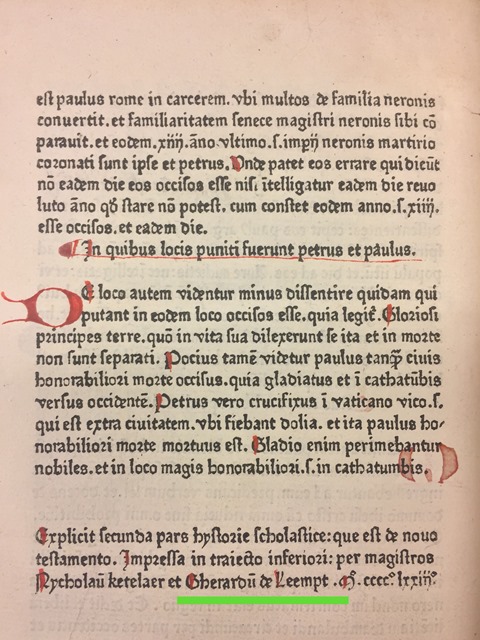 The Incunabula Short Title Catalogue  states that there are ten known surviving copies of this particular de Leempt imprint; the rediscovery of this book happily adds another.

Fittingly for a work dedicated to deciphering texts, further research on the text of Modus legendi abbreviaturas suggests that the author’s identity – Werner von Schussenried, a jurist from Speyer – is concealed/revealed in an acrostic formed by taking the first letters of each line in a section of the book’s text (it doesn’t exactly jump out of the page though!).

The rediscovery of this copy provides opportunity to examine the particular edition more closely and it is quite exciting to see that the watermark on the paper used for de Leempt’s edition suggests that it may actually be the earliest of the 40 or so editions of von Schussenried’s legal glossary. 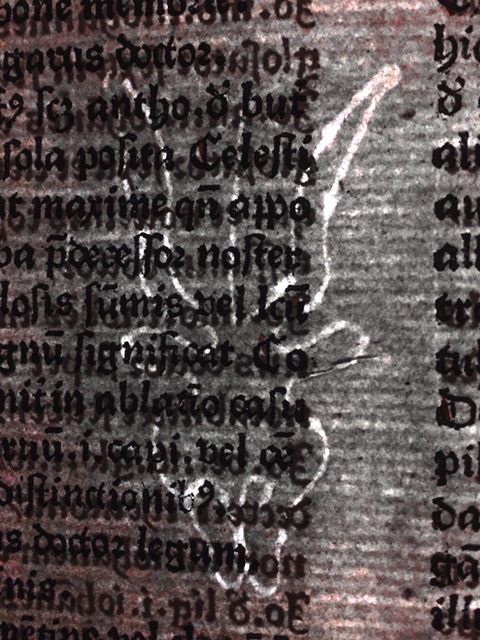 Watermark from a page in the 161.i.21 copy of Modus legend abbreviaturas – a bull’s head, curved muzzle, and cross – used on paper in the Low Countries in 1473, perhaps dating Leempt’s book to three years before what is thought to be the first edition from 1476.

So how was this copy saved from obscurity? Many might think it reprehensible that the book has been missed for so many years, but arguably its rediscovery is also a sign of the Library’s good custodianship. It was found by the Library’s dedicated Collections Audit Officer undertaking systematic checks of shelf ranges against catalogue holdings.

It’s not unusual for ‘unrecorded’ copies of incunabula to be discovered sitting shyly on shelves in other national libraries. A comment in a review of a new catalogue of incunabula in the Summer 2014 issue of  The Book Collector (P.1901/86.), nails it somewhat, “If one wonders how it can be that so many generations have missed incunabula sitting on the shelves ... at the same time one must be grateful that a thorough search is now being made.”

Wytze Gerbens Hellinga and Lotte Hellinga, The Fifteenth-Century Printing Types of the Low Countries. Translated from the Dutch by D. A. S. Reid. (Amsterdam, 1966) L.R.412.d.6