‘And what does one do on the fourteenth of July? Does one celebrate Bastille Day? […] Might one sing on Bastille Day?’ she asked. ‘Might one dance in the streets? Somebody give me an answer.’

David Sedaris, in his memoir Me Talk Pretty One Day (London, 2000; YK.2001.a.13423), recalls his language teacher’s increasingly exasperated efforts to get her class of foreign students to discuss traditional ways of celebrating France’s Fête Nationale. But although the fall of the Bastille on 14 July 1789 was quickly recognized as a turning-point in the French Revolution, in 1817 there was one house in Paris where the mood that day was far from festive. Within it Anne Louise Germaine, Madame de Staël, lay dead. 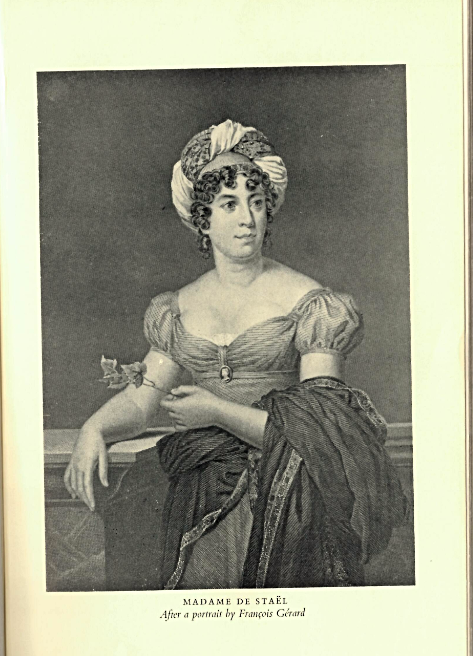 Born on 22 April 1766 as the daughter of the Swiss financier Jacques Necker, Director-General of France under Louis XVI, the young Germaine was fortunate in having a mother who hosted one of the most brilliant salons in Paris. Suzanne Curchod, the daughter of a Swiss Protestant pastor, frequently received Edward Gibbon, the Comte de Buffon and other distinguished guests, and planned to raise her daughter according to Calvinist principles but also those of Jean-Jacques Rousseau, allowing the little girl to mingle freely with the intellectuals who frequented their home. However, when Necker was dismissed from his post in 1781 the family moved to an estate at Coppet on Lake Geneva, only returning to Paris four years later.

Finding a suitable match for Germaine did not prove easy; not only had she shown signs of precocious brilliance, but eligible Protestants were scarce. Just before her 20th birthday, however, she was married in the chapel of the Swedish Embassy in Paris to Baron Erik Magnus Staël von Holstein, a Swedish diplomat 17 years her senior; despite the social advantages which it conferred, the marriage, though never dissolved, effectively ended with a legal separation in 1797.

After experimenting with drama and publishing a less than impartial volume of Lettres sur les ouvrages et le caractère de J. J. Rousseau (Paris, 1789; R.407. (17.)), Madame de Staël turned to fiction, the field in which she achieved renown with Delphine (1802) and Corinne, ou l’Italie (1807). The first of these suggests a less malicious version of Choderlos de Laclos’s Les Liaisons dangereuses: similarly written in the form of a series of letters, it describes the efforts of the eponymous heroine, a young widow, to manipulate the fate of a distant relation, Matilde de Vernon, by arranging a match for her with Léonce de Mondoville, only to become embroiled in a hopeless passion for him which ends in her suicide. The second, composed after the author had travelled in Italy, recounts in twenty chapters the love of the poetess Corinna and a young Scottish nobleman, Lord Oswald Nelvil, alternating between Rome, Naples, Scotland and Florence and depicting not only the landscapes, costumes and artistic glories of Italy but a gifted and independent woman far in advance of her times who nevertheless comes to a tragic end. 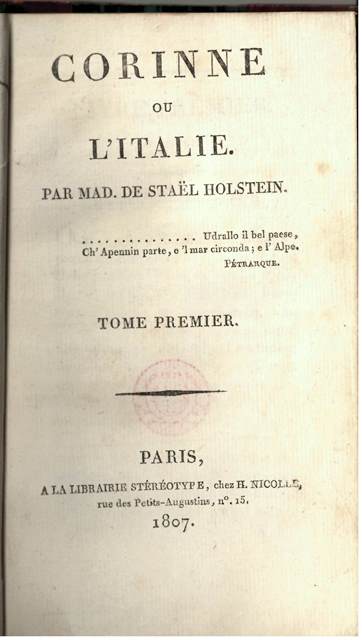 The author’s life proved no less picturesque and eventful. With the outbreak of the French Revolution, she took an increasingly active role in politics, supporting the constitutionalist cause and rejoicing at the meeting of the Estates-General in May 1789 which launched the events leading to the downfall of Louis XVI. Despite the departure of her father after being dismissed from office yet again in 1790, she enjoyed diplomatic protection because of her husband’s position and took advantage of this to frequent the National Assembly and hold court in the Rue du Bac, where Talleyrand and other prominent figures frequented her salon. It was not until 1792 that she was forced to flee on the eve of the September massacres, first to Coppet where she established another salon and then to England before her husband’s reinstatement allowed her to return to Paris in 1794 after the fall of Robespierre.

Baron de Staël’s death in 1802 set his widow free to embark on further adventures, characterized by a running battle of wits with Napoleon, who put her under surveillance before finally, in 1803, forbidding her to reside within forty leagues of Paris. Accompanied by her lover Benjamin Constant, she decamped to Germany and over the next eight years ricocheted between that territory, Coppet, Italy, Russia, Sweden and England, collecting a train of distinguished friends and admirers including August Schlegel, Wilhelm von Humboldt, Lord Byron and the Duke of Wellington. Her turbulent relationship with Constant, commemorated in his novel Adolphe, ended with his marriage to the less volatile Charlotte von Hardenberg, and in 1811 she privately married a young Swiss officer, Albert de Rocca, three years her junior, producing a son the following year at the age of 46. The next year she published De l’Allemagne  an account of the political, social and cultural conditions which she had noted during her German travels. 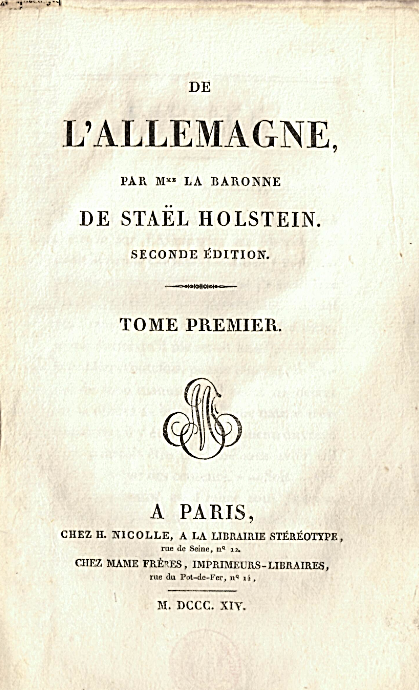 Both her health and that of Rocca were in decline, and they travelled to Italy in October 1815. She had already met the Duke of Wellington before Waterloo, and their friendship was instrumental in persuading him to reduce the numbers of the Army of Occupation following Napoleon’s defeat. Despite continuing ill-health, she continued to run her Paris salon until her death from a cerebral haemorrhage on 14 July 1817, shortly after a conversion in extremis to Roman Catholicism.

Madame de Staël’s colourful and productive life has been seen as an example for women throughout Europe who, with the collapse of the old order, seized the heady freedoms which the new one offered. It can certainly be argued that, applauding the principles of the French Revolution, she embraced to the full the principles of liberty, equality and fraternity which it proclaimed.