I led the downtrodden and tyrannised peoples of past generations;
I helped them to throw off enslavement, and gain their complete liberations;
I marched with the spirit of progress, and aided its every endeavour;
And I shall march on with the peoples, until I shall free them for ever.

You money-bag saints, you crowned cut-throats, anointed with strife and contentions;
I come to destroy you, your laws, and your lies and your foolish conventions;
Your hearts that are thirsting for blood, I shall pierce till the life in them ceases;
Your crowns and your sceptres, your little gold toys I shall break into pieces.

So hang me or shoot me, your efforts are futile – a waste of endeavour,
I fear neither prisons nor tortures, nor scaffolds, nor aught whatsoever.
Anew I shall rise from the earth, and its surface with weapons shall cover,
Until you sink down in your graves, till your power for evil is over.

This revengeful snarl of poetry is extracted from Joseph Bovshover’s ‘Revolution’, written before the Russian Revolution but translated and published in February 1919 from its original Yiddish by Joseph Leftwich, for the British anarchist-communist journal The Spur. It is an uncompromising poem, preaching menace to the ruling classes and all the pillars of aristocratic and bourgeois society. 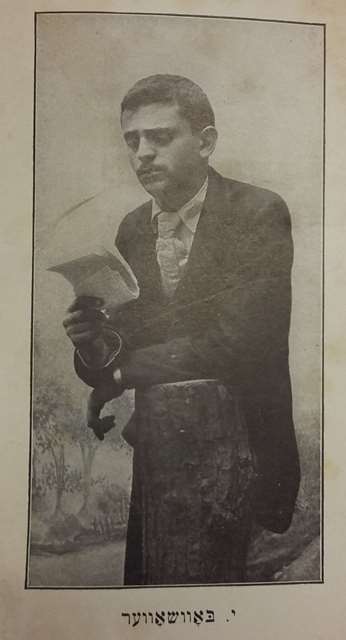 Joseph Bovshover (1873-1915) was born in Lyubavichi (‘the city of brotherly love’) within the Pale of Settlement of the Russian Empire, part of the limited territories in which Jews were allowed to live. Originally a home of the Chabad Hasidic movement, Lyubavichi’s Jewish community fell victim to the Nazi invasion of the Soviet Union, massacred in November 1941. 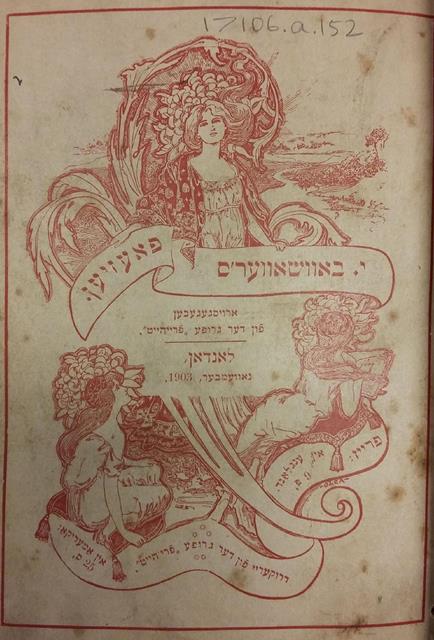 Half a century earlier in 1891, just a few years after a wave of violent anti-Jewish pogroms, Bovshover had emigrated from what he called ‘the Czar’s oppressed and knouted lands’ to New York – and bitterly regretted being torn from his mother and father to make a new life away from the pogroms alone. Joining the working-class ‘melting pot’ in the United States he became a noted anarchist-communist ‘sweatshop poet’ and agitator in the labour movement, publishing in Yiddish and in English under the pseudonym Basil Dahl. In his final years Bovshover was hospitalised for mental illness before dying in 1915. 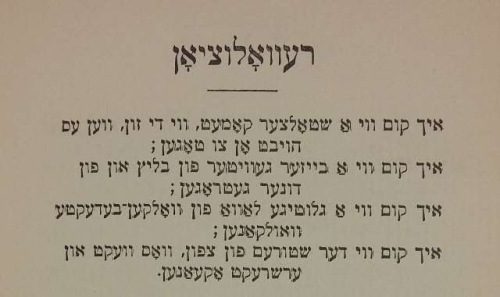 First stanza of ‘Revolution’ in Yiddish, from the 1911 Gezamelte shrifṭen

After his death, Bovshover’s contribution to proletarian poetry was widely recognised, and not just in the United States. After the Bolshevik revolution in 1917 Russia reclaimed him as her own. David Shneer wrote that he was ‘canonized … as a founder of a Jewish worker’s literary history’ by the emerging Soviet Yiddish press. Throughout 1918, his poetry appeared in three of the twelve editions published of the first Yiddish language newspaper in Soviet Russia, Varhayt, meaning ‘Truth’ in German. This was an echo of the Communist Party newspaper Pravda, which meant ‘Truth’ in Russian, and in August 1918 it was re-founded as Der Emes– ‘the Truth’ again, in Yiddish. Though supported by Lenin, it was shut down under Stalin in the late 1930s as part of a broader Soviet campaign against Yiddish culture.

Bovshover was soon recognised in Britain also. A number of translations of his poetry were published in The Spur in the years after the Russian revolution, including the extracts above. The Spur was a British journal of anarchist-communism taking inspiration from both Mikhail Bakunin and Karl Marx. Unlike many other anarchist publications its editors supported Lenin’s Bolshevik party until the consolidation of the Soviet state in the early 1920s. Cover of The Spur for November 1919, illustration by Henry Bernard. LOU.LON 702

A cast of colourful characters were involved in producing The Spur. It was edited by Guy Aldred, a Glasgow based revolutionary, and Rose Witcop, a Jewish anarchist and sexual reformer who had emigrated to Britain from Kiev in Ukraine, then a part of the Russian Empire. The journal’s distinctive cartoons were supplied by Henry Bernard. Joseph Leftwich translated Bovshover’s poetry for The Spur. He was drawn to Bovshover as a socialist and a passionate promoter of Jewish culture. Leftwich has become famous as one of the ‘Whitechapel Boys’, a label he invented for a group of Jewish writers and artists in the East End of London before the First World War. 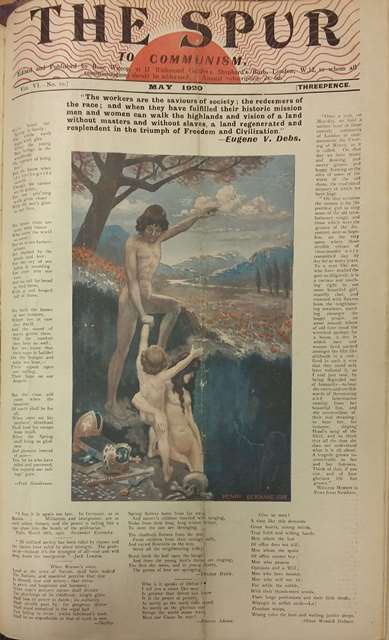 Bovshover’s poetry was also often set to music. While his work seems to have come to British anarchism in the late 1910s and 1920s through the Soviet Yiddish press, more recently he has been rediscovered through his contributions to the American labour songbook by the Scottish folk-musician Dick Gaughan, revived as part of Gaughan’s musical assault on Thatcherism and the escalation of the Cold War in the 1980s. Gaughan and Judy Sweeney can be heard performing a different translation of ‘Revolution’, with all the radical passion that such a poem commands, on YouTube here and there is a live version by Gaughan alone here.

‘Joseph Bovshover: Poet of the Workers and the Sweatshops’ at http://yiddishkayt.org/view/joseph-bovshover/

As part of the series of events to accompany the exhibition Russian Revolution: Hope, Tragedy, Myths, the British Library will be hosting a one-day event exploring the relationship between the British Left and the Russian revolution on Monday 10 July 2017. Details are available here.