The current exhibition at the Science Museum on Robots and their history prompts some thoughts about robots in Spain.

Probably the most famous robot in Spanish literature is the bronze head in the house of Don Antonio Moreno, which appears in Don Quixote (Vol. II, ch. 62). Don Antonio leads Don Quixote into a room with “a table, apparently of jasper, resting on a pedestal of the same, upon which was set up, after the fashion of the busts of the Roman emperors, a head which seemed to be of bronze.” Swearing his guest to the strictest secrecy, he explains:

“This head, Senor Don Quixote, has been made and fabricated by one of the greatest magicians and wizards the world ever saw, a Pole, I believe, by birth, and a pupil of the famous Escotillo of whom such marvellous stories are told. He was here in my house, and for a consideration of a thousand crowns that I gave him he constructed this head, which has the property and virtue of answering whatever questions are put to its ear. He observed the points of the compass, he traced figures, he studied the stars, he watched favourable moments, and at length brought it to the perfection we shall see to-morrow, for on Fridays it is mute, and this being Friday we must wait till the next day. In the interval your worship may consider what you would like to ask it; and I know by experience that in all its answers it tells the truth.” 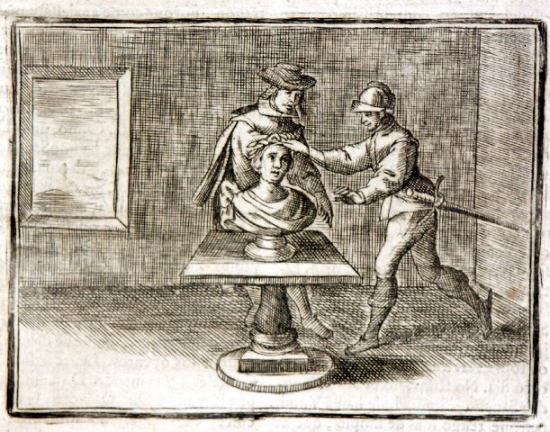 The next day, Don Antonio takes his wife, Don Quixote, Sancho Panza, and two other gentlemen and ladies to test the bronze head. He approaches first and asks it what he is thinking of:

The head, without any movement of the lips, answered in a clear and distinct voice, so as to be heard by all, “I cannot judge of thoughts.”
All were thunderstruck at this, and all the more so as they saw that there was nobody anywhere near the table or in the whole room that could have answered. “How many of us are here?" asked Don Antonio once more; and it was answered him in the same way softly, “Thou and thy wife, with two friends of thine and two of hers, and a famous knight called Don Quixote of La Mancha, and a squire of his, Sancho Panza by name.”

The guests then ask their questions in turn: one woman wants to know how she can be beautiful and is told, “Be very modest.” The other asks whether her husband loves her and is advised to “Think how he uses thee”

One of the gentlemen asks the straighforward question “Who am I?”:

The other gentleman asks about the wishes of his eldest son and receives the disturbing answer: “to bury thee.”

Don Antonio’s wife wants to know whether she will “have many years of enjoyment of my good husband” and is assured: ‘“Thou shalt, for his vigour and his temperate habits promise many years of life, which by their intemperance others so often cut short.”’

“Tell me, thou that answerest, was that which I describe as having happened to me in the cave of Montesinos the truth or a dream? Will Sancho's whipping be accomplished without fail? Will the disenchantment of Dulcinea be brought about?”
“As to the question of the cave,” was the reply, “there is much to be said; there is something of both in it. Sancho’s whipping will proceed leisurely. The disenchantment of Dulcinea will attain its due consummation.”
“I seek to know no more," said Don Quixote; “let me but see Dulcinea disenchanted, and I will consider that all the good fortune I could wish for has come upon me all at once.”

Finally Sancho asks his questions and is less impressed with the answers than his aristocratic companions:

Head, shall I by any chance have another government? Shall I ever escape from the hard life of a squire? Shall I get back to see my wife and children?” To which the answer came, “Thou shalt govern in thy house; and if thou returnest to it thou shalt see thy wife and children; and on ceasing to serve thou shalt cease to be a squire.”
“Good, by God!” said Sancho Panza; “I could have told myself that; the prophet Perogrullo could have said no more.”
“What answer wouldst thou have, beast?” said Don Quixote; “is it not enough that the replies this head has given suit the questions put to it?”
“Yes, it is enough," said Sancho; “but I should have liked it to have made itself plainer and told me more.” Sancho interrogates the head and is rebuked by Don Quixote, from The History and Adventures of the Renowned Don Quixote. …(London, 1755) 12490.k.6.

This episode can be seen as a parody of the talking head of Friar Roger Bacon  but the romances of chivalry which Cervantes mocks consistently are full of automata. Given the magic which pervades the chivalresque genre, all these automata are presented as genuine. 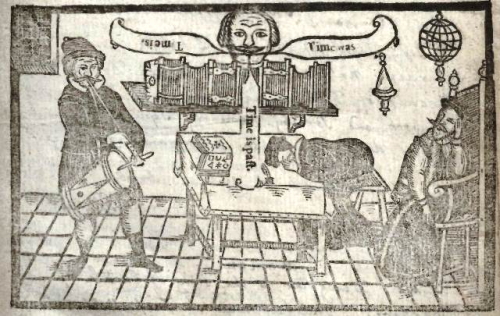 But what we know and Quixote and Sancho do not is that Don Antonio’s marvellous head is a fake.

Quixote is easily taken in by humanoids: recall the the puppets of Maese Pedro (I, 22), and the windmills (I, 8). 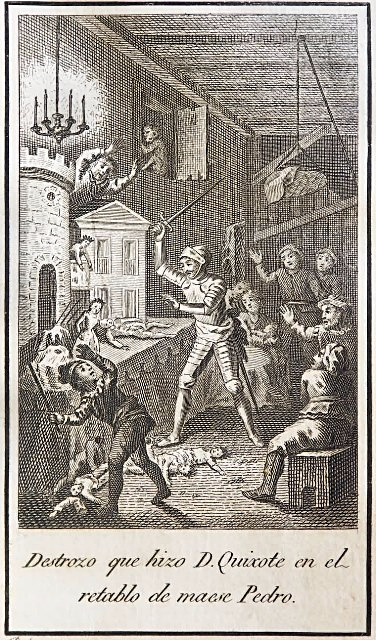 I’ve seen a street performer imitating a living statue of the Man of La Mancha in the streets of Cervantes’s home town of Alcalá.

And in 1621 the guild of silversmiths of Mexico City organised a procession of characters from the novel, in which Quixote himself wore a ‘mask of silver’ (máscara de plata) and carried a silver lance.

‘Superhuman’, a recent exhibition at the Wellcome Collection, examined how the human body has been improved and extended by prosthetics.

Rendered invulnerable (in his own estimation) by his plate armour, his grasp extended by his lance and his speed multiplied by his horse (likewise armoured), is not the Don himself a type of automaton?