The Russian Empire stretched continuously across one-sixth of the world’s landmass, from Poland to the Pacific and from the Arctic Circle to the deserts of Central Asia. According to the data of the General Staff of the Russian Imperial Armed Forces and the Statistical Committee of the Ministry of the Interior, at the beginning of the 20th century Russia’s territory stretched from north to south for nearly 3,000 miles and from east to west for over 6,600 miles. Russian tsars ruled over the second largest territory in the world after the British Empire. 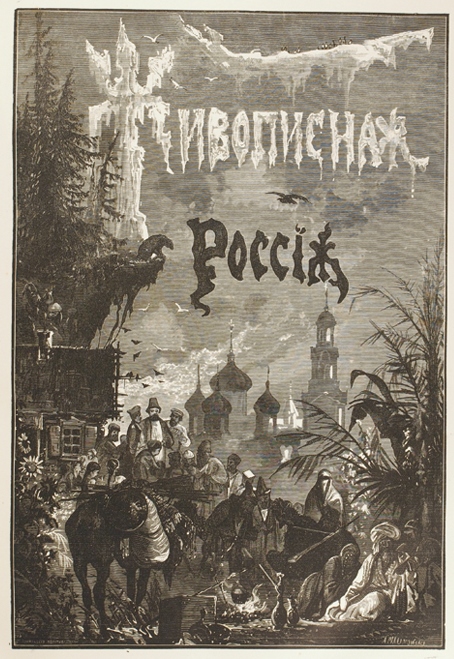 Title-page of  Zhivopisnaia Rossia (St Petersburg, 1881-1901) Cup.22.k.1. This multi-volume work described different regions and peoples of the Empire for a general audience and the decorative title-page attempts to depict the range and diversity of Russia’s vast territories in a single image

The Russian Empire was home to some 150 million people divided into around 170 ethno-cultural groups, whose ways of life ranged from nomadic steppe herdsmen and tribute-paying fur trappers to communal agriculturalists, industrial workers and wealthy nobles. Full maps of the Empire were usually published in two sections: European and Asian. The Asian part of Russia beyond the Ural mountains was significantly larger than the European part and occupied nearly two thirds of the entire Russian territory. Most of these territories were industrially and agriculturally underdeveloped compared with the European areas. In some areas of Siberia the population density hardly reached 10 people per square mile, while in the country’s western parts, including Poland and Finland, it was over 100 people per square mile. At the beginning of the 20th century the Asian territories that belonged to the Russian Empire were described as Siberia (including the Far East), nine regions in Central Asia with its population of nearly eight million people, and the so-called Caucasian region or Transcaucasia. The kaleidoscopic diversity of geography, agriculture, industry, culture, ethnicity, religion, history and social structures sustained enduring notions of a land of paradox and unknowable mystery.

It is not surprising that economic modernisation of Russia hugely depended on the transportation system. The vastness of Russia and slowly developing infrastructure could partly explain extreme diversities and difficulties in managing the country. 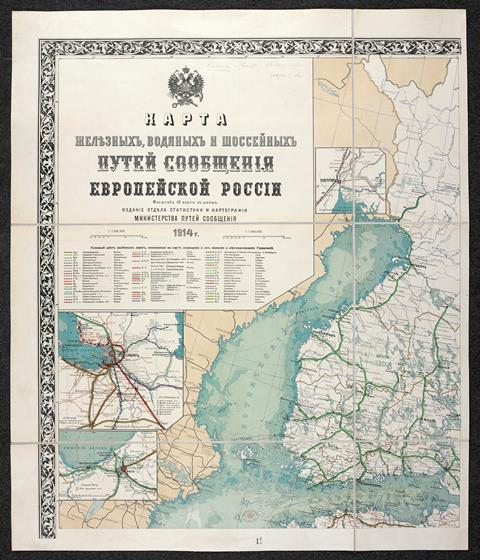 As demonstrated in the Map of the Development of the Russian Railway Network, 1838-1918, which shows the railway construction in ‘European’ and ‘Asian’ Russia, the railways remained concentrated in Russia’s most industrial western core. 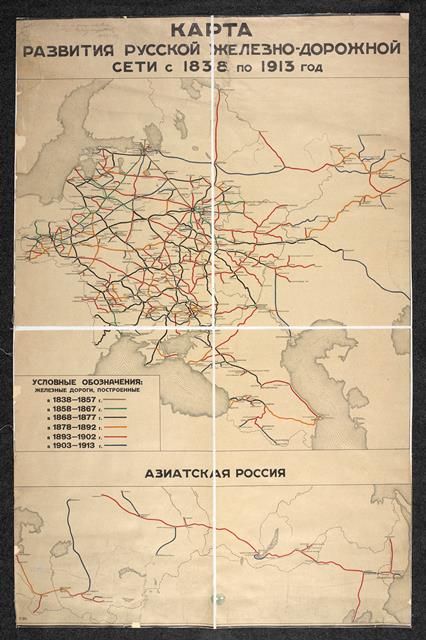 At the end of the 19th century a journey from Moscow to Sakhalin took about three months. It depended on crossing rivers and was season-bound. In March 1897, on his way to exile Vladimir Ul’ianov, the future leader of the Revolution known as Lenin, wrote in a letter to his mother:

The halt here is a long one and there is nothing to do, and I have decided to write yet another letter en route, my third. I still have two more days’ journey ahead of me. I drove across the Ob [river] in a horse-sleigh and bought tickets to Krasnoyarsk. … The way the trains run here is beyond all bounds. To do that 700 versts [464 miles] we shall crawl for forty-eight hours. Beyond Krasnoyarsk, the railway goes only as far as Kansk, i.e., for 220 versts [145 miles] —and altogether to Irkutsk it is about 1,000 versts [663 miles]. And so I shall have to go on by road—if I have to go at all. Another 24 hours is taken up by those 220 versts on the railway; the further you go, the slower the trains crawl along.
You have to use a horse-sleigh to cross the Ob because the bridge is not ready, although its skeleton has been built. … The country covered by the West-Siberian Railway … is astonishingly monotonous—bare, bleak steppe. No sign of life, no towns, very rarely a village or a patch of forest—and for the rest, all steppe. Snow and sky—and nothing else for the whole three days. They say that further on there will be taiga, and after that, beginning at Achinsk, mountains. The air in the steppe, however, is wonderful; breathing is so easy. There is a hard frost, more than twenty degrees below, but it is easier to bear here than in Russia. It does not seem to me that it is twenty below. The Siberians say it is because the air is ‘soft’, and that makes the frost easier to bear. Quite probably it is so.

Russia’s vast territory lacked infrastructure that could support industrialisation. The building of the Trans-Siberian Railway started in 1891. As minister of transport and later minister of finance, Sergei Witte saw the project as one of the vehicles for economic reforms. 7,000 km was built between 1891 and 1916. However, in 1904 the Trans-Siberian Railway proved slow in carrying troops and supplies over the vast distance which had devastating results on the outcomes of the Russo-Japanese War. After the October Revolution in 1917, the railway became a strategic point, as the Czechoslovak Legion  took control over large areas near the railway.

The British Library’s exhibition Russian Revolution: Hope, Tragedy, Myths is open until 29 August 2017, telling the extraordinary story of the Russian Revolution from the reign of Russia’s last Tsar to the rise of the first communist state. As part of the accompanying series of events, on 21 July Railway Historian Christian Wolmar will be giving a talk on the Trans-Siberian Railway during the Revolution. You can find more details, including how to book, here.