One of the exhibits in our current exhibition Russian Revolution: Hope, Tragedy, Myths is a cartoon from the satirical magazine Novyi Satirikon. It shows the religious mystic Grigorii Rasputin sitting on a throne, gazing out with his trademark intense stare. Tsar Nicholas II and his wife Alexandra crouch at Rasputin’s feet while the German Kaiser Wilhelm II stands behind the throne. This reflects the popular view at the time that Rasputin had undue influence over the Russian royal family and that he and the German-born Alexandra plotted against Russian interests during the First World War. The same belief is reflected in a Japanese cartoon of the period, which shows the Tsarina, Kaiser and Rasputin (in the guise of a demon) sitting conspiratorially round a table. 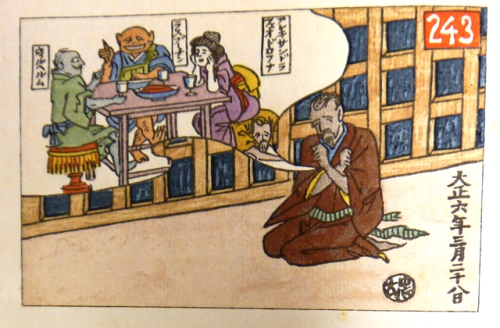 But one interesting point about the Novyi Satirikon cartoon is that it was actually published in April 1917, four months after Rasputin’s death (and two after Nicholas’s abdication). Such a caricature would of course have been hard to get past the censors while Rasputin was alive and enjoying the patronage of a still-intact monarchy. But it is striking that, even after his death and the fall of the monarchy, his image was a powerful enough symbol of corruption to make the front page of a satirical magazine. 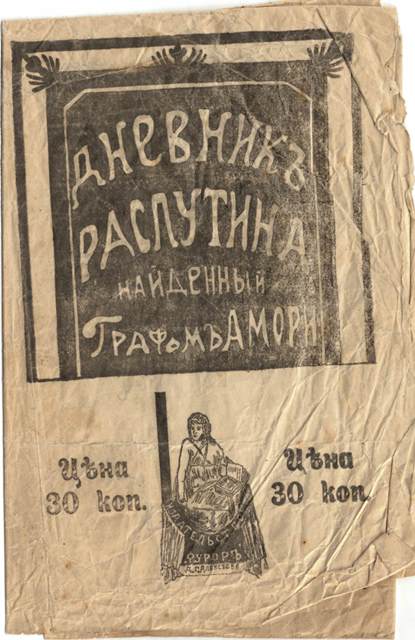 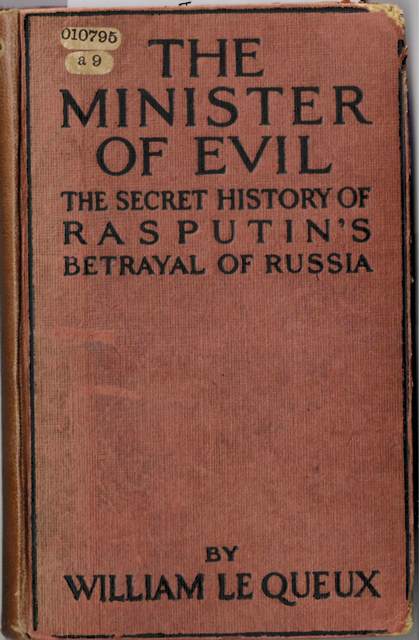 However lurid and fanciful some of their claims, these works were presented as factual – even George Sava’s bizarre Rasputin Speaks (London, 1941; 10795.p.27), supposedly Rasputin’s own story told to Sava through a Russian spirit medium. But of course Rasputin made his way into works defined as fiction too, beginning as early as 1923 with Ivan Nazhivin’s Rasputin (English translation New York, 1929; 010795.aa.66). Since then he has featured in everything from straightforward historical novels to elaborate conspiracy thrillers where he wields supernatural powers or works evil from beyond the grave. More recently Rasputin has appeared in graphic novels, usually in his more fantastical guise as in the Hellboy universe or Alex Grecian’s Rasputin series  (vol. 2, 2016 at YKL.2017.b.2935). 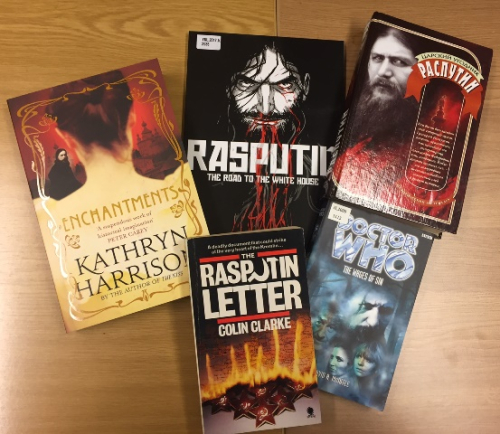 A selection of Rasputin-related fiction from the BL collections

Rasputin appeared on film even before he appeared in fiction, starting in 1917 with The Fall of the Romanoffs, featuring Rasputin’s former ally and later antagonist, the Monk Iliodor, as himself. The 1932 film Rasputin and the Empress led to a lawsuit from Prince Felix Yusupov, one of Rasputin’s assassins, and his wife Irina, angered in particular that a character believed to represent Irina was portrayed as Rasputin’s lover. A curious, if indirect, aspect of Rasputin’s legacy is that the lawsuit resulted in the introduction of the now-familiar disclaimer in film credits that the characters ‘bear no resemblance to living persons’. 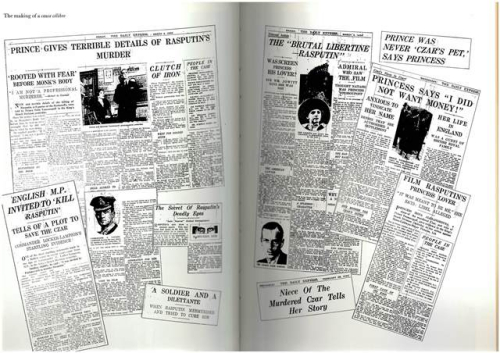 Some of the press coverage of the Yusupovs’ libel case, reproduced in Sir David Napley, Rasputin in Hollywood (London, 1989) YC.1990.b.3188.

Of course Rasputin is a gift for any actor with a powerful presence and intense gaze – step forward, among the Brits, Christopher Lee (Rasputin the Mad Monk, 1966), Tom Baker (Nicholas and Alexandra, 1971) and Alan Rickman (Rasputin, Dark Servant of Destiny, 1996). While the latter two are straight historical dramas, the first is at the lurid end of the scale. But perhaps the nadir of Rasputin’s film career is the 1997 animation Anastasia in which he returns from limbo (with a wisecracking bat sidekick) to pursue the surviving Grand Duchess Anastasia.

In Anastasia, Rasputin gets to sing, as he also does in at least three operas: Rasputin’s End (1958; F.1256.q) by Nicolas Nabokov, and two works simply entitled Rasputin by Jay Reise (1988) and Einojuhani Rautavaara (2003). He has been sung about too, perhaps most famously in Boney M’s 1978 hit ‘Rasputin’ which immortalised him for a generation as ‘Russia’s greatest love machine’. But 45 years earlier Allie Wrubel and Joe Hoover had come up with a similar concept in ‘Rasputin, that Highfalutin’ Lovin’ Man’ (VOC/1933/WRUBEL). 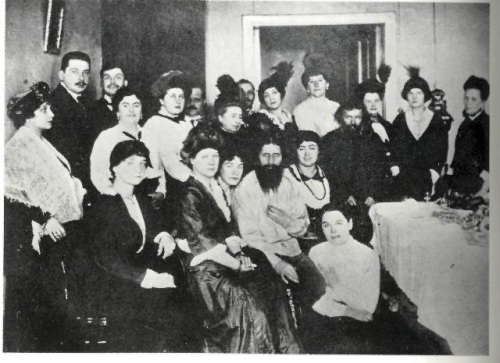 Rasputin surrounded by women, reproduced in Rasputin goes to Hollywood.  His elite female admirers were fascinated more by Rasputin’s  mysticism than by any supposed sexual magnetism.

Reputable modern non-fiction tends to reject the more lurid stories about Rasputin or to engage seriously with their origins and likely veracity. However, as so few facts are known about parts of Rasputin’s life and so many things reported as facts cannot be proven or otherwise, we can never know the whole truth. Clearly he was not the evil mastermind depicted by many writers, nor was he the kindly and slandered saint recalled by his daughter Maria in her two books attempting to clear his name of any scandal or wrongdoing. But even for those who seek a balanced and scholarly view of the real Rasputin, there is much fascination in exploring his enduring afterlife in popular culture.