A Salamanca scholar defies the Inquisition

Fray Luis de León (1527-91) was one of Spain’s most prestigious scholars and one of its greatest poets. Unfortunately for him his area of expertise was Hebrew. This in itself was enough to make him suspicious to the Inquisition. And he was of Jewish extraction, which made him even more open to attack. As you’ll recall, the principal targets of the Spanish Inquisition were Protestants and Jews. A knowledge of Hebrew was the sign of the potential fellow-traveller.

Catholicism defended the Latin of the Vulgate against all comers: never mind that the Old Testament was translated from the Hebrew, the Vulgate was superior.

In the 17th century Cornelius à Lapide pondered that in the account of the Flood Noah’s dove had in its beak not an olive branch (Vulgate) but an olive leaf (in Hebrew):

Pro illo: Portans ramum olivae virentibus folii[s]: Graeci libri habent κάρφος, id est, festucam. S. Ambrosius legit, ramum, Augustinus, surculum. Hebraice est: Ecce folium oliuae raptum erat in ore eius. Vox (haleh) proprie significat folium, quod denotat, ascendere: vnde haleh, dicitur foliũ, quia vento ascendit in altum, & licet magis conuenire videatur imbecillitati rostri columbae, folium ex arbore decerpere quam ramũ, potuit esse ramus ille perquam paruus & tener, pauculis constans foliis.
Where [the Vulgate] says: carrying an olive branch flourishing in leaves: the Greeks have rod, S. Ambrose reads branch, Augustine twig. In Hebrew it is: Behold a plucked olive leaf was in its mouth. The word haleh literally means leaf, which by extension means to rise: hence haleh is said leaf, because it ascends on high on the wind, and although it might seem that it was more suitable to the weakness of a dove’s beak to pluck a leaf rather than a branch, this could have been a branch, albeit a small and thin one, with just a few leaves.

Miguel de la Pinta Llorente told the sad tale of the destruction of the Salamanca school of Christian Hebraists, condemned one by one to imprisonment in the name of orthodoxy.

Fray Luis spent five years at trial and in prison. On his release he wrote a poem, ‘Aquí la envidia y mentira / me tuvieron encerrado ... ’ (though some now don’t think it’s his.)

He was also an admirer, translator and imitator of the Roman poet Horace. When he came to devise a personal emblem, he chose a motto from Horace: ‘ab ipso ferro’.
The source is Odes IV, 4:

These [the early settlers in Italy] like an elm, lopt with an ax, will grow,
and spring afresh where it receiv’d the blow;
like growing Hydra by Alcides slain,
lop off one head another sprouts again

Thus the accompanying picture shows a tree stump with the axe embedded and sprouting new growth. 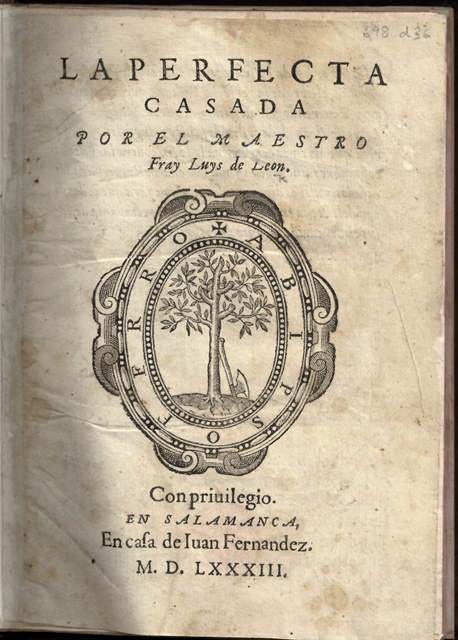 It’s worth pointing out that it wasn’t common for authors to display their devices on the title pages of their publications: that space was normally reserved for the printer’s device or the patron’s arms.

And if further proof were needed that this was Fr Luis’s choice, Michael J. Fulton shows that the emblem wasn’t used until Fr Luis came out of jail, and after that he used it repeatedly.

A cultured act of defiance to Fr Luis’s persecutors: Cut me down and I’ll be stronger.