Alexander Krasnitskii – a Labourer of Literature

He did not live to celebrate his 51st birthday and died of a longstanding illness. He published his first piece in a popular magazine when he was 17, and during his 33 years-old career as a journalist and writer used over 50 pseudonyms, including such playful names, as ‘Grumpy Grandfather’, ‘Frivolous Petersburger’, ‘Retired Cupid’, ‘Alef Omegovich’, etc. Apart from articles, poems, short stories, plays, essays and letters to the editor, with which he would sometimes fill an entire issue of cheap popular serials with extra-slim portfolios, he also wrote over 100 novels, including popular histories, biographies, romances, and crime fiction, as well as prefaces and commentaries to new editions of Russian and world classics. He was born in Moscow and died in St Petersburg. He wrote in Russian and was not translated into other languages. The Russian public loved his texts often not knowing who the author was, but quickly forgot them when the new ‘Time of Troubles’ in the form of the Russian Revolution struck Russia in 1917. As Krasnitskii himself quite rightly defined it, his literary work was a labour of love and a ‘literary suicide’ at the same time. 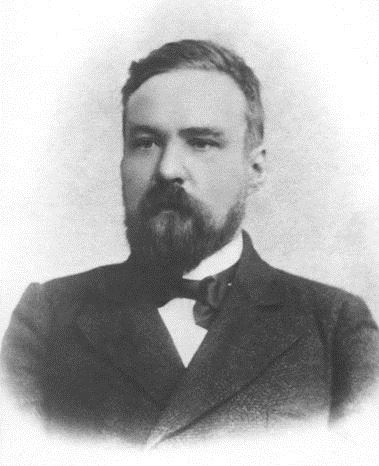 Alexander Krasnitskii (1866-1917) had to work hard for his entire life, earning a living, as they say in Russia, ‘by his nib’, but he is fairly little known. He received a mention in Dan Ungurianu’s Plotting History: The Russian Historical Novel in the Imperial Age (Madison, 2007; m08/.10879), and a handful of new paper and electronic editions has appeared in the post-Soviet decades.

Some of Krasnitskii’s historical novels and biographies of prominent Russians, such as Tsar Peter the Great, the military leader Alexander Suvorov and General Skobelev, came out as lavish editions, illustrated by the best contemporary artists, including studio painters and war field artists like Nikolai Samokish, who reported on wars from the front lines in 1904 and 1915. 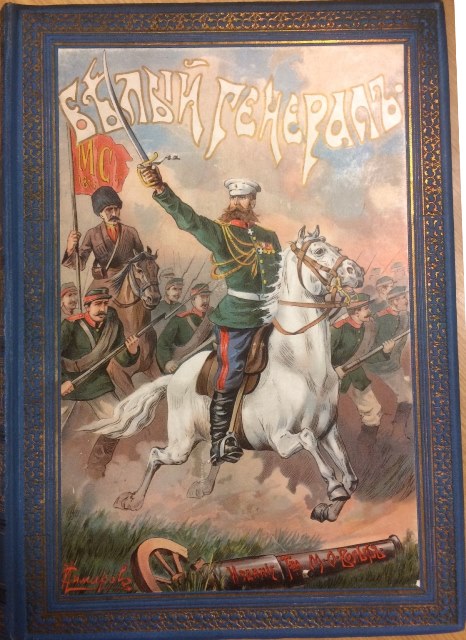 Cover (above) and illustration by illustration by E.K.Sokolovskii (below) from the Krasnitskii’s biography of General Skobelev, Belyi general (St Petersburg, 1904) 12590.m.21. 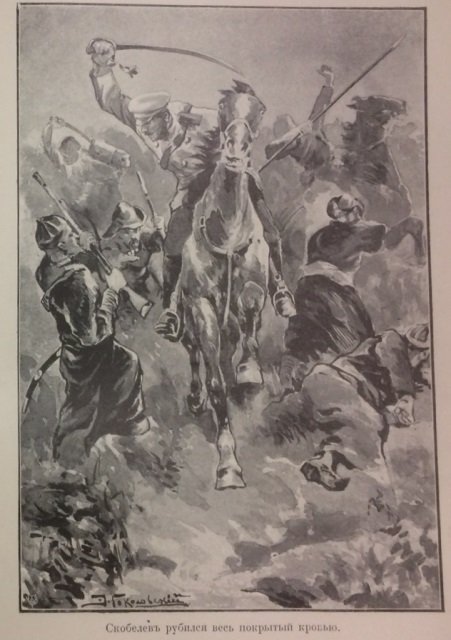 Krasnitskii’s father, an artist by training, was acquainted with several Russian authors and intellectuals, including Nikolai Gogol, Prince Petr Viazemskii, Ivan Aksakov, and many others. His father’s passion for archaeology and photography which made him travel across Russia documenting sites and antiquities also contributed to Krasnitskii’s interest in journalism, adventures and historical literature. Always contributing to several publications simultaneously and editing quite a few of them, in 1891 Krasnitskii became an employee of the magazine and publishing house ‘Rodina’ (Homeland) owned by the successful German-born entrepreneur Alvin Kaspari. In a couple of years Krasnitskii started editing all Kaspari’s newspapers and magazines – over a dozen at one time. Most of his own writings were also published by Kaspari’s publishing house, usually under the name of Aleksandr Lavrov. 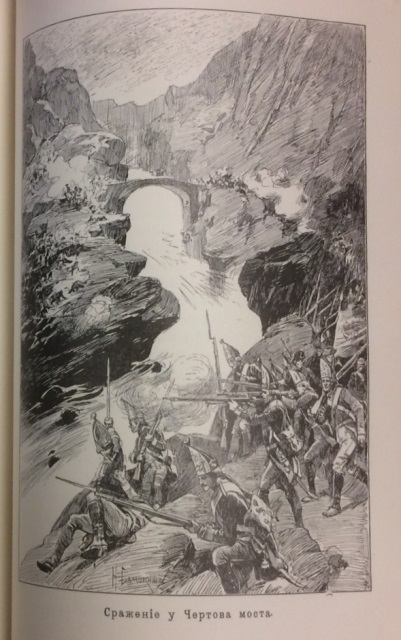 An illustration by Nikolai Samokish from Krasnitskii’s Russkii chudo-vozhd’ about Alexander Suvorov (St Petersburg, [1911?]) 10795.ee.28. The picture shows one of the most dramatic of Suvorov’s battles – the crossing of the Devil’s Bridge

This ‘Aleksandr Lavrov’ was known to the Russian public as a creator of the Russian Sherlock Holmes, or rather Monsieur Lecoq, as Krasnitskii himself called him after the popular French novel by Émile Gaboriau which was translated into Russian in 1880, and led to the name Lecoq becoming a common term for any detective. The Russian Lecoq was called Mefodii Kirillovich Kobylkin and was a ‘little, plump, clean-shaven man’ with a funny surname that derives from the Russian word for ‘mare’:

All his life, almost from childhood, he had dedicated to the desperate struggle with criminal nature. In this struggle, what mattered was not strength, but skills, resourcefulness, and cunning. He had become so sophisticated in it that he got the reputation of someone who could feel where and when a crime must be committed a month before it would happen... And it was a justified reputation. Kobylkin had developed a special scent; he knew the criminal soul very well and predicted the conditions under which predatory instincts are played out.

Kobylkin’s adventures and extraordinary abilities were very popular with the contemporary public. In the Soviet Union, though, crime fiction was not a genre that could easily get the Communist Party’s approval. From light reading it turned into a propaganda tool focused on the rehabilitation of criminals, rather than solving crimes. Soviet readers longing for light entertainment went as far as copying Krasnitskii’s books and distributing them via existing Samizdat networks, along with criticism of the Soviet political system, banned literary works and religious texts. In the British Library we have six typewritten books (not first copies!), that were copied from Kaspari’s editions of the early 20th century. 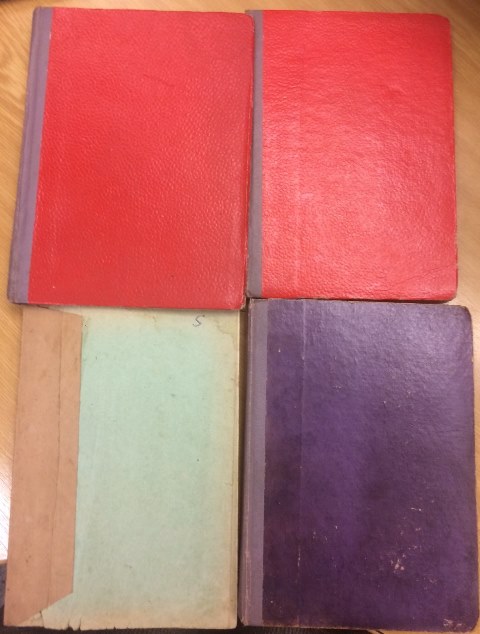 Above, Soviet Samizdat: detective novels of the early 20th century; below, a typewritten list of novels from the Kobylkin series, inserted in one of the books as an added title page. 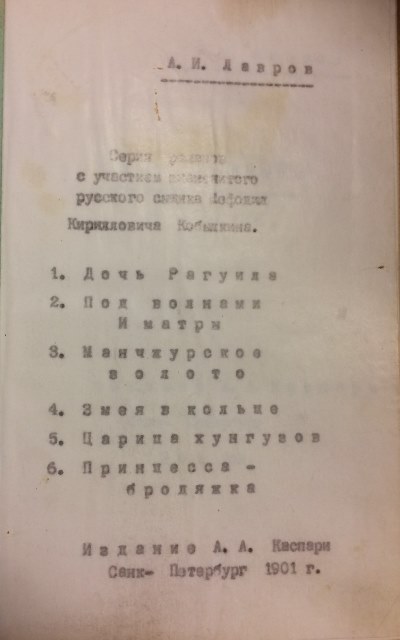 We would like to hope that the ‘labourer of Literature’ Aleksandr Krasnitskii might not only find new readers, but maybe even critics and scholars.