Bertillons and others: some language textbooks of the past

Back in 1979 my introduction to the French language – and indeed to learning any foreign language – came via a textbook entitled Le français d’aujourd’hui (‘Today’s French’) and its central protagonists, the Bertillon family, whose adventures were generally recounted in picture stories, with commentary and vocabulary, opposite a page explaining new grammar points with related exercises. 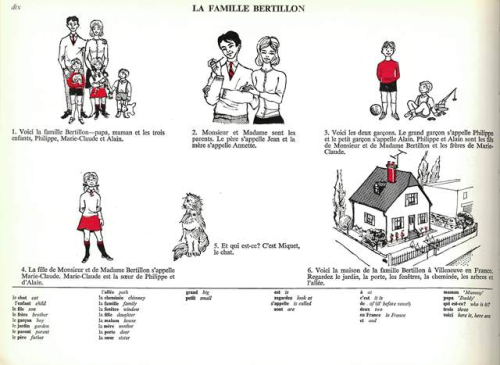 La famille Bertillon consisted of Papa, Maman and three children: Philippe, Marie-Claude and Alain. They lived in the – presumably fictional – town of Villeneuve, complete with Miquet the cat and, a little later, Kiki the dog, a stray adopted by Alain in an early adventure. M Bertillon (Jean) was a customs officer at Orly airport while Mme Bertillon (Annette) was a stay-at-home mum.

After M Bertillon caught a smuggler at work – leaping athletically over his desk and crying ‘Au voleur!’ – he was rewarded with a bonus, enabling the family to move closer to Paris and the authors of the textbook to introduce the future tense: ‘When we are living in Sceaux I will…’. The imperfect tense was introduced in a rather less obvious way, with Philippe, inspired by a history lesson, falling asleep and dreaming of the life he would have led at various periods in the past. Our French teacher actually apologised to us for this chapter. 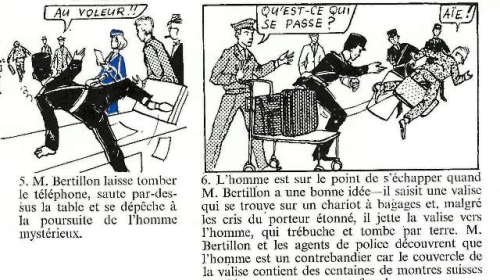 After the move the Bertillons also acquired a car, which Mme Bertillon (who already had one cycling accident under her belt) managed to crash while taking Marie-Claude and Alain for a day out. On seeing the damaged car, M Bertillon, who had been at a rugby match with Philippe, exclaimed ‘Sacrebleu!’, translated by the book as the surprisingly mild ‘tut-tut’. Our teacher had another translation: ‘Never say this,’ she warned us, ‘It is the French equivalent of “Gadzooks.”’ 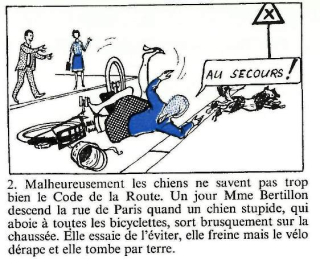 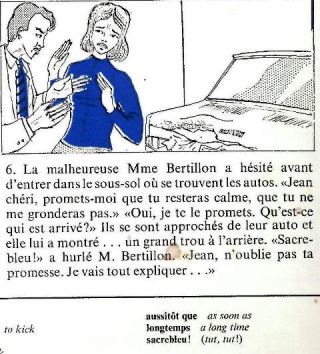 Although not usually so mediaeval, Le français d’aujourd’hui, was certainly outdated by the time it fell into my generation’s teenaged hands, having been first published shortly before we were born. One of the chapters not featuring the Bertillons was a plug for ‘Concorde – l’avion de l’avenir’ and the lesson when we studied it was almost certainly interrupted by ‘the aeroplane of the future’ passing over us on its regular daily flight, its sonic boom rendering audible speech briefly impossible.

For German we had something rather more up-to-date, illustrated for additional verisimilitude with photographs taken in the city of Göttingen where the stories were set – although the wing collars and flared trousers of its mid-1970s characters seemed as hopelessly outmoded to our mid-1980s sensibilities as the Bertillons’ badly-drawn 1960s outfits. 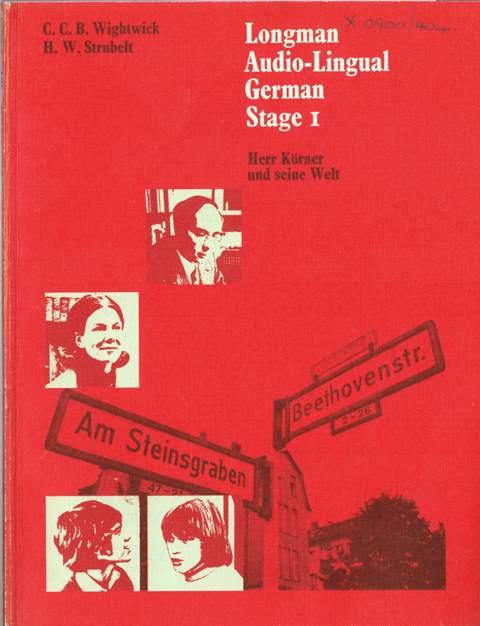 As the title (surely one of the dullest for a textbook ever) implies, Longman Audio-Lingual German was also more up-to-date in its use of audio material. Listening to stories and dialogues, following the spoken narrative of wordless picture stories, and repeating phrases and sentences, all using reel-to-reel tapes in the classroom, were an integral part of the course. 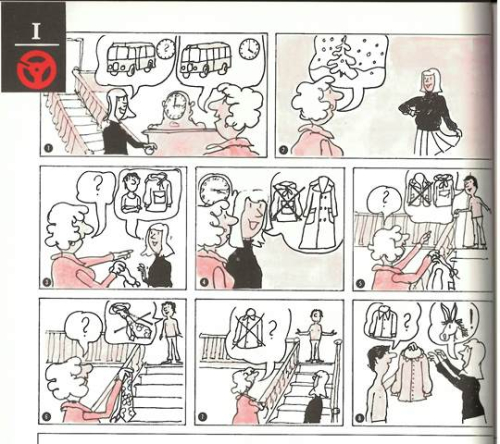 A picture story from Audio-Lingual German, designed to make more sense when you heard the accompanying tape

Unlike the nuclear Bertillon family of Le français d’aujourd’hui, Audio-Lingual German featured a wide cast of characters. There was teenager Dieter Kollwitz with his siblings and his friends, but the main focus was actually on adult characters, notably journalist Herr Körner and his landlady Frau Schütze. 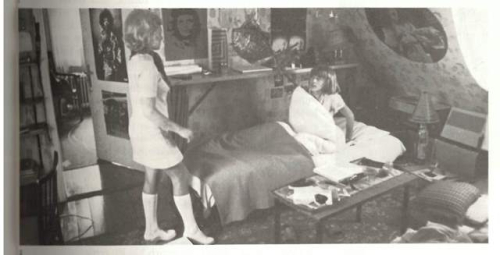 Most of these characters’ adventures, like those of the Bertillons, were fairly humdrum, except on the occasions when the writers introduced the two bizarrely useless petty criminals, Adolf and Hermann, who were presumably meant to add comic relief. In a particularly ridiculous episode, Hermann was smuggled into Herr Körner’s rooms inside a new sofa, in order to raid the premises. When this plan failed, he and Adolf, having no money for food, broke into a car to steal a sausage, only to discover that it was a plastic theatre prop. Like Philippe’s dream, this whole story triggered an apology in advance from the teacher.

We all rather assumed that Herr Körner and the widowed Frau Schütze would eventually get together, but it was not to be. At the end of Book 2, Herr Körner got a publishing deal and left Göttingen for Berlin, although his departure was inevitably hampered by Adolf and Hermann stealing his motorbike at a motorway service station, where several key characters from the books had conveniently converged. 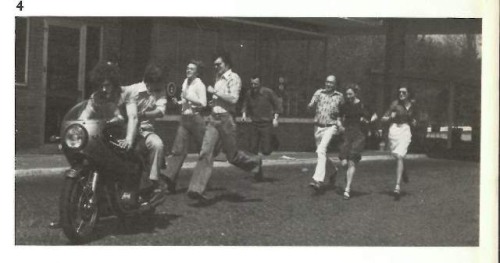 Looking back at these two textbook series, published approximately ten years apart, it is clear how much the approach to language learning, and indeed to the kind of material likely to engage the interest of secondary school children, had changed between the mid-1960s and the mid-1970s. With modern language studies sadly declining in UK schools, it is to be hoped that today’s textbook writers and selectors are finding ways to engage modern schoolchildren in new ways with the pleasure of learning a language.