The British Library has recently acquired the first Swedish translation of Voltaire’s Candide, ou l’Optimisme, translated as Candidus, eller alt til det bästa (1783). Voltaire’s 1759 philosophical picaresque novel about its eponymous hero’s gradual disillusionment from an unfettered optimism in the world has been called the ‘the most clandestine work of the century’. So clandestine, in fact, that scholars continue to debate the first place of publication and the first version of the text. The critique of the religious and political establishment ever-present in Voltaire’s works made them too dangerous to publish openly and Voltaire and his publishers honed the art of clandestine publication and circulation. 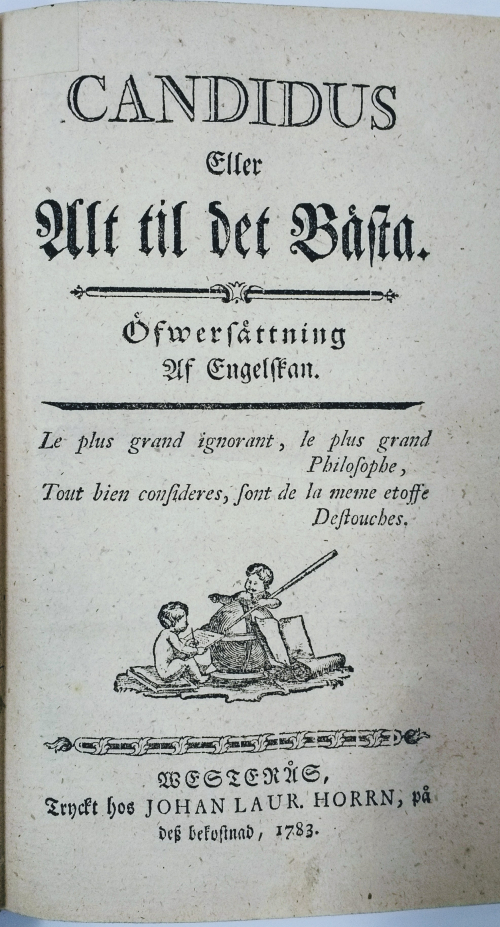 Ira O. Wade, in his article on the first edition of Candide, explains the methods developed by Voltaire and his publishers to avoid the censors of Paris and Geneva, where he had moved by this point:

Clandestinity was practiced in many ways: a book could be published, for instance, in Paris and place-marked Amsterdam; in London and Amsterdam and smuggled to Paris; or in some provincial French city (Lyons, Avignon, Rouen) and circulated through a Parisian colporteur. Voltaire had used all these methods. In every one of these places there were printers, or at least a printer, eager and willing to serve him. […] In the case of a very clandestine work, Voltaire would use multiple printers and simultaneous editions.

Wade’s forensic analysis of no less than 17 editions, all published in 1759, allows him to create a schema that identifies which was logically the first edition, from which the others originated. Multiple printers in different countries meant that the English-speaking world did not have to wait long for their Candid or Candidus, published the same year, while new and variant editions of the French were simultaneously being produced. The British Library has eight 1759 Candides in English, six published in London and one each in Edinburgh and Dublin.

Our Swedish edition, was printed in Västerås in 1783 by Johan Laurentius Horrn and is one of only three known copies, the other two belonging to the Kungliga Biblioteket in Stockholm and the Universität Greifswald. The text is however a translation from an English edition rather than the original French, whichever the original might be. This then poses the question, which English edition did the 1783 Swedish translation derive from? Thankfully, Wade can help us here too. He tells us that there are two groups of 1759 English editions; one group which translated Wade’s bet on the first edition – with the English title, Candidus – and another group descending from a variant of that first edition – with the English title, Candid. Wade delineates the differences between the variant and the original and it suffices to look at just one example for us to decide on the origins of the Swedish translation.

In chapter V, ‘Tempête, naufrage, tremvlement de terre, & ce qui advent du docteur Pangloss, de Candide, & de l’anabatiste Jacques’, Doctor Pangloss is attempting to console some victims of the Lisbon earthquake by explaining how things could not have been otherwise in the best of all possible worlds. Pangloss utters the lines: ‘Car […] tout ceci est ce qu’il y a de mieux’, in other words, ‘all this is for the best’. Except, in the original French edition, we find the words ‘car […] c’est une nécessité que si un Univers existe’, or, ‘it is necessary for such a universe to exist’. Wade shows how those 1759 English editions entitled Candid, rather than Candidus, correspond to the variant rather than the original, and contain the translation of Pangloss’s clause, ‘because, said he, all this is fittest and best’, corresponding to ‘tout ceci…’ It is this version of the line that we find in the Swedish translation, which it renders, ‘alt detta är tjenligast och bäst’. Thus, we at least know that our Swedish first edition has come from this particular strand of Candide translations into English.

In the anonymous Swedish translator’s preface, addressed to the also unknown ‘Herr J. L.’, the translator points to the lack of masterpieces of translation. They are all too often produced by those without and intimate enough understanding of the original or translation languages or both, he says. Assurances are given that the text has been written ‘by a man who understands the language from which the translation has been made’. The preface ends with the self-effacing respect of the translator:

If my essay has only been able to entertain You in Your moments of leisure, I assure You that it would be my greatest delight. My purpose would then have been fully achieved and with the great Westphalian philosopher Doctor Pangloss I could with complete certainty say: All is for the best.

But our small investigation has inspired more questions than answers. Why does the Swedish first edition translate from the English and not the French? For a country so clearly under the influence of French ideas in the 18th century, the answer is not obvious. Is there a connection between translator and the very anglophile city of Gothenburg? Is the idea of a ‘Öfwersättning af Engelskan’ (‘Translation from English’) actually an ironic addition to complement Voltaire’s own misleading subtitle, ‘Traduit de l’allemand de Mr. le docteur Ralph. Avec les additions qu’on a trouvés dans la poche du docteur lorsqu’il mourut à Minden l’an de grace 1759’ (‘translated from the German of Dr. Ralph with additions found in the doctor’s pocket when he died, at Minden, in the year of our Lord 1759’)? Why did it take until 1783 for Candide to be translated into Swedish and why then? Who might the anonymous translator be and to whom is his preface dedicated, the mysterious Herr J. L?

With so many questions left, it is hard not to feel more like Candide, l’Optimiste, at the end of the novel rather than at the beginning, when faced with the challenge of understanding the story behind this translation!