International Collaboration: a Dutch Polymath and a Czech Printer in 17th-Century Rome

We do not often realise just how much collaboration took place between foreigners working abroad rather than in their native countries in 17th-century Europe. One interesting example of such a collaboration is that between a Dutchman, Cornelius Meyer, and a Czech printer, Jan Jakub (or Giovanni Giacomo) Komárek, who worked and collaborated in Rome, a veritable hive of intellectual activity at that time. 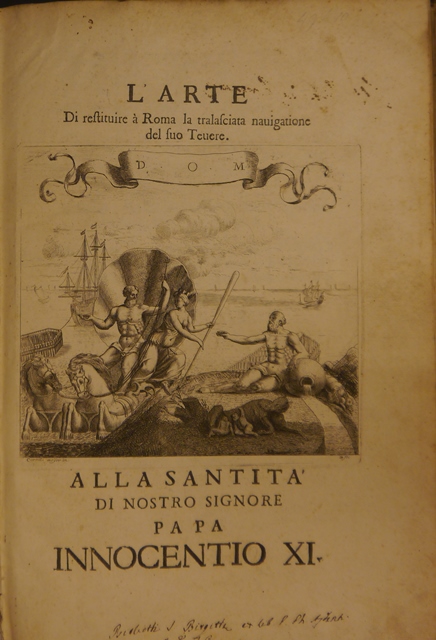 Little is known of Cornelius Meyer except that he was born in Holland in 1629, was generally accepted to be a polymath and trained as an architect, civil engineer and an engraver. He moved to Rome, one of the most vibrant and active capitals in Europe, in the 1680s and died there in 1701. He is principally remembered for his studies on technology, particularly his masterminding improvements to the navigability of the River Tiber in his L’arte di restituire a Roma la tralasciata navigatione del suo Tevere. 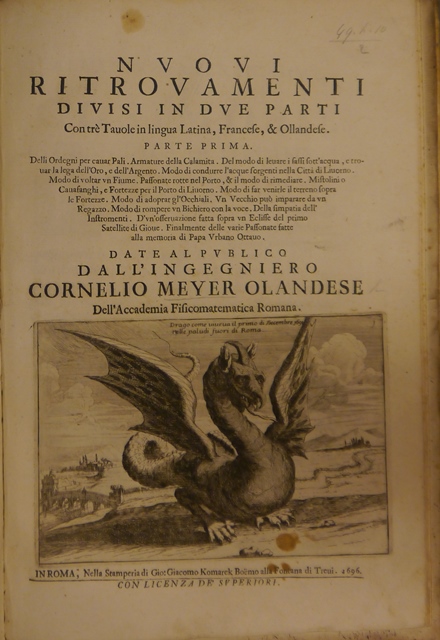 He is also remembered for his description and detailed account of the sighting of a dragon ‘nelle paludi fuori di Roma’, in December 1691. Despite his detailed and beautiful engravings of the beast’s skeletal remains, Meyer’s account of the dragon was an elaborate hoax not unlike ‘Piltdown man’ but was so skilfully produced and illustrated that he duped many learned men and scientific experts. 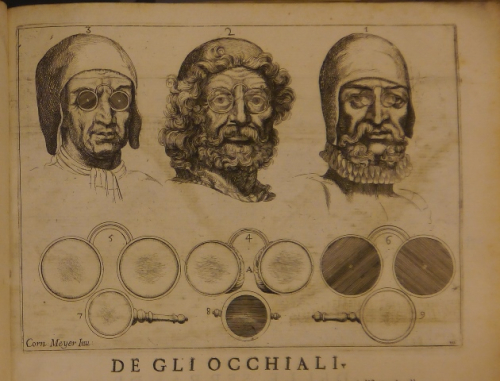 Engraving of three wearers of different kinds of spectacles, from Nuovi ritrovamenti

Meyer’s engraving of spectacles and their wearers for his work on various technologies, Nuovi ritrovamenti, divisi in due parti, printed by Komarek on behalf of the Accademia Fisico-matematica, one of the most important scientific academies in Rome, is extremely finely detailed, recalling similar images by Holbein. It imparts a very human perspective on what could have been a dryish discussion of the important science of optics, which had made very considerable advances since Galileo first used the telescope to study the heavens systematically. Moreover, by depicting the wearers of the spectacles in fine detail, two with fulsome beards, all three wearing caps or bonnets, and two wearing beautifully detailed ruffs, thereby modelling their visual aids, Meyer imparts a sense of scale and proportion to his illustration and is able to show the size of the pince-nez spectacles and their respective lenses he has designed (one set of which is even tinted) to their best advantage and how well they would look and fit on the noses of prospective clients. 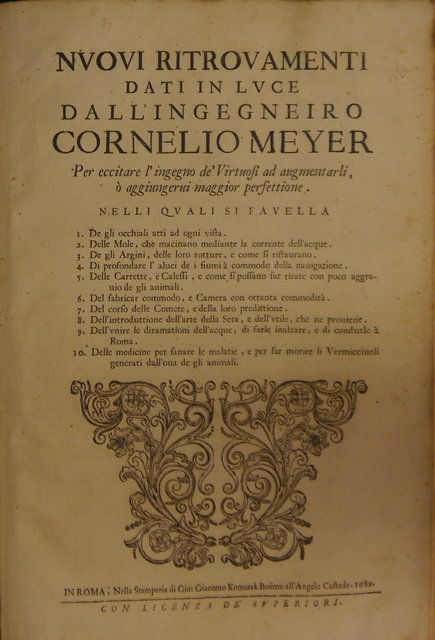 Despite the Italianization of his forenames to Giovanni Giacomo, the printer Jan Jakub Komárek was born in Hradec Králové, in Bohemia, in 1648. He moved to Rome between 1669 and 1672 and was originally employed as a technician in the papal print works of the Congregazione della Propaganda della Fede, founded in 1622. He set up his own printing press at ‘all’Angelo custode’ and later, ‘alla fontana di Trevi’ and was active until 1700, publishing several liturgical works by Giovanni Giustino Ciampini, Andrea Pozzo’s celebrated Prospettiva, and works for the Accademia of the Collegio Clementino. The work is an excellent example of very effective networking and of the creation of considerable synergy between author and publisher and of truly international co-operation: a Dutchman having his work printed by a Czech printer in Italy.

This co-operation is also a very timely reminder of the very great debt that the whole continent of Europe, and Italy in particular, owes to Germany. It was a German, Johannes Gutenberg, who invented printing with moveable type in the 1450s, something which played such an important role in disseminating new texts and ideas, and created an ever-increasing demand for the printed word. But we should also not forget the debt owed by Italy to German printers and engravers, from Albrecht Dürer to Lucas Cranach. From the first introduction of printing to Italy in 1465 by Konrad Sweynheym and Arnold Pannartz, who worked in partnership at Subiaco, printing was firmly established in Italy by German printers.