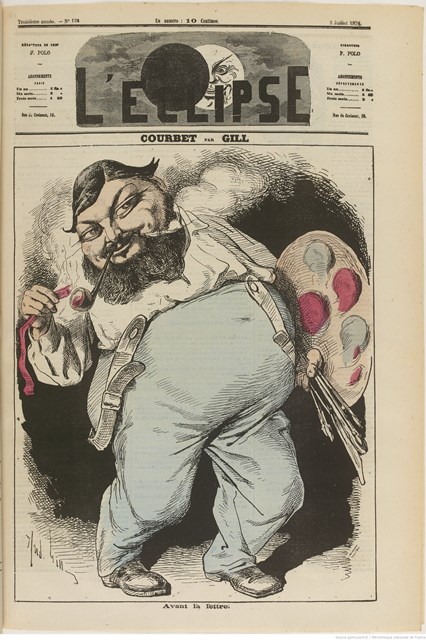 Caricature of Courbet by André Gill from L’Eclipse, 2 July 1870 MFM.MF45

Gustave Courbet, who started painting in the 1840s, is well-known for his large-scale realist works focusing on themes and subjects of everyday life. He favoured landscapes and genre scenes (as opposed to religious, historical or mythological topics), without trying to idealise or romanticise them. Courbet was often attacked and criticised in the satirical press for his artistic stance, susceptible to offend the tastes of a bourgeois audience, as his paintings contrasted with the academic works exhibited through the established Parisian Salon, an annual event originally organised by the Académie Royale de peinture et de sculpture in the Salon carré in the Louvre palace. 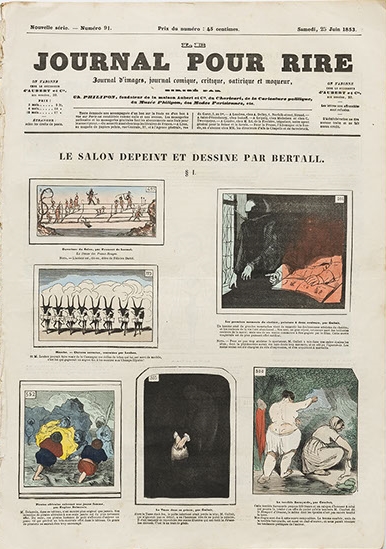 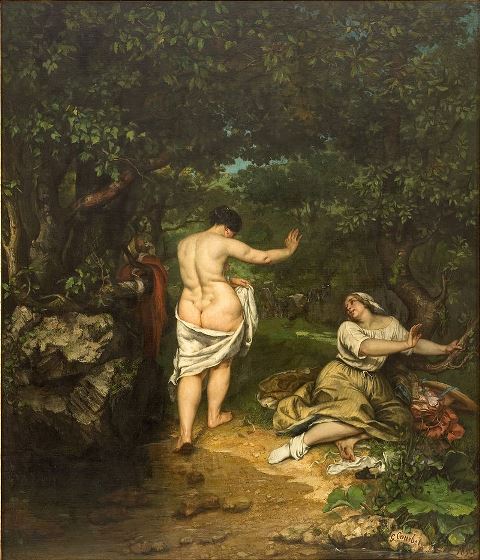 Courbet and his realist paintings led to many caricatures, as from the 1850s onwards they were engulfed in the publicity deriving from the annual Salon and the Expositions universelles, which were accompanied by thorough guides, accounts and widely disseminated reports, often written by personalities of the time such as Daumier, Baudelaire or Diderot. Whether as individual articles published in the satirical press or collected in dedicated Albums circulating in parallel with the official ones, the extent of the humoristic illustrated reviews of the artworks exhibited at the Salons was such that they have been called ‘Salons caricaturaux’. Courbet, who liked to stage himself, and enjoyed society, took advantage of the artistic and political scandal surrounding him. In 1855 and 1867, he organised himself private exhibitions of his work as an alternative to the official Salon. Finally, despite their satirising and comical intent, some caricatures showed him and his works in a positive light. 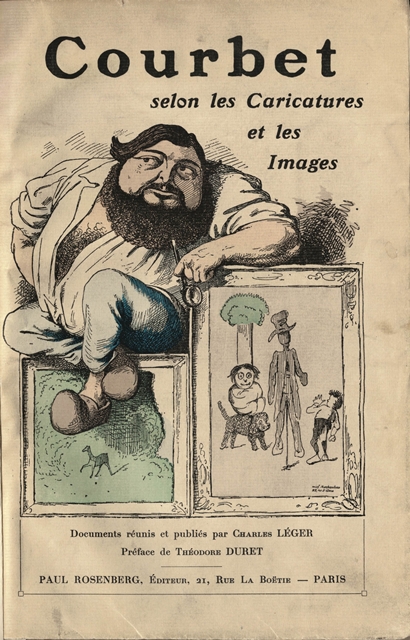 In Gill’s caricature, shown above, Courbet is portrayed as a bulging, bearded man, wearing clogs and smoking a pipe on top of two pictures exhibited at the 1868 Salon, Le chevreuil chassé aux écoutes, printemps (The Hunted Roe Deer on the Alert) and L’Aumône d’un mendiant à Ornans (The Charity of a Beggar at Ornans), where the beggar is depicted as a scarecrow. 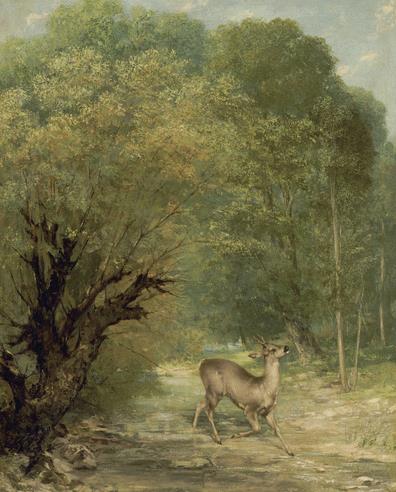 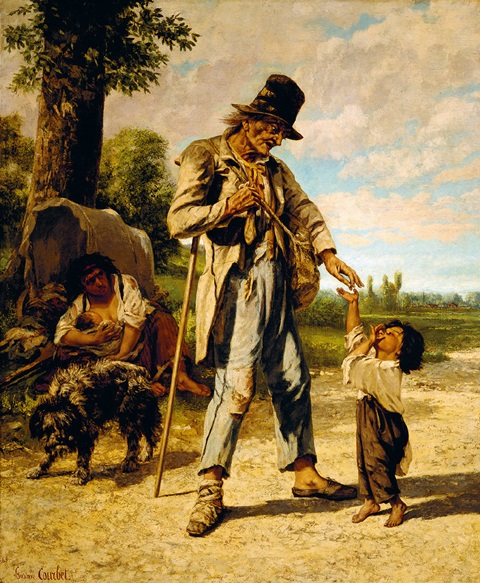 As an artist Courbet faced the social and moral conservatism of the Second Empire: his realist paintings were criticised as vulgar and dirty and his nudes contrasted with classical models (in 1866, he painted the provocative L’Origine du Monde, focusing on a woman’s genitalia). His political stance, close to the anarchist philosopher Proudhon and to the Socialists, also played a part in the controversy surrounding him. The revolutionary upheaval of 1870 and the fall of Napoleon III led to the Paris Commune, until the French defeat against the Prussians in 1871. 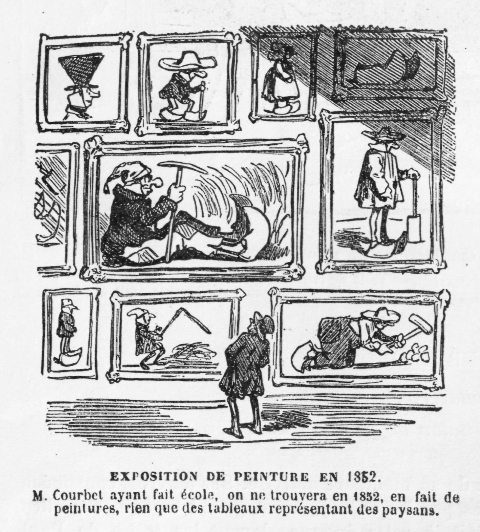 At the time, Courbet stood as a political candidate and became a Delegate of Fine Arts for the Commune. He ensured the opening of the Louvre and Luxembourg museums and campaigned for the abolition of prestigious but conservative artistic institutions and national prizes. A particular controversy, widely derided in the satirical press, surrounded the destruction of the Napoleonic Vendôme Column, which Courbet had wished to be relocated because of its imperialistic connotations: he was later held responsible and heavily fined for its demolition. Léonce Schérer’s caricature amalgamates the image of Courbet as a déboulonneur (debunker) with a reference to his controversial Les Casseurs de pierres (The Stone-breakers) destroyed during the Second World War 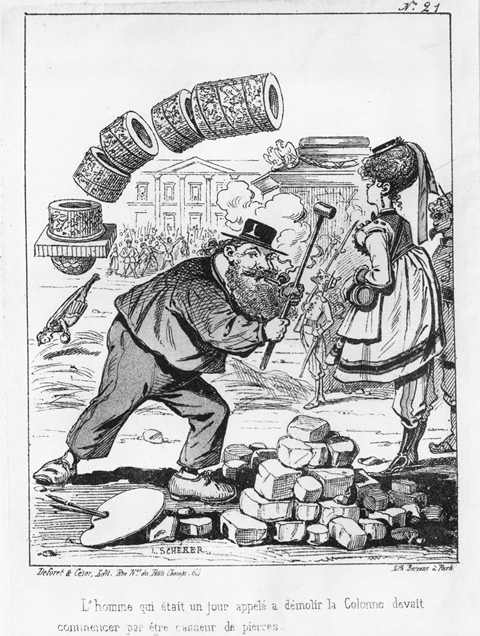 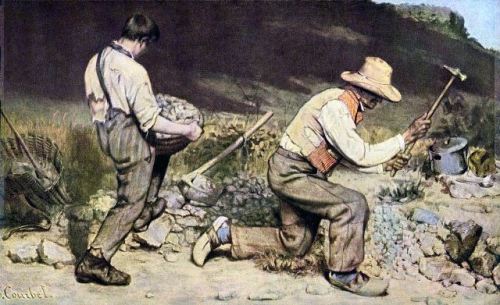 Courbet was used as a subject by many caricaturists of the time who published in periodicals such as L’Illustration, Journal pour rire, Journal amusant, Charivari, Tintamarre, La Lune, L’Eclipse... Courbet’s caricatures made him an image of excess, in eating, drinking and smoking, depicting him as a hairy, unkempt, loud and talkative dandified peasant in clogs (originally from the Jura region/Franche-Comté, he suffered from dropsy). Léonce Petit shows Courbet with a bovine face, painting surrounded by farm animals. 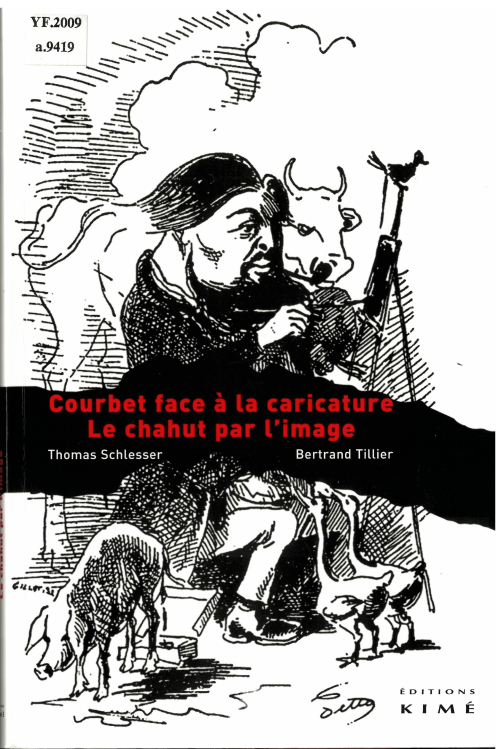 The caricatures of Courbet crystallise the contemporary reception of the artist and his work, highlighting his modernism and deepening our understanding of his contemporaries, fellow artists and French (Parisian) society in the second half of the 19th century. They make fun of the subject matter chosen by the artist and of his realist style, presented as leading to ugliness (“Pourquoi veut-il forcer la nature de son talent, et se faire le chef de l’école du laid?”, Charles Diguet, Dartagnan, 11 June 1868), profanity, infantilism or caricature (“Etrange artiste que M. Courbet! Il se complaît sept fois sur dix à parodier son talent”, B. de Renjarde). It is artificiality rather than naturalism in the painter’s work which is derided in Nadar’s caricature of Courbet’s Les Demoiselles des bords de la Seine (Young ladies on the banks of the Seine) represented as two manikins knocked on the ground. 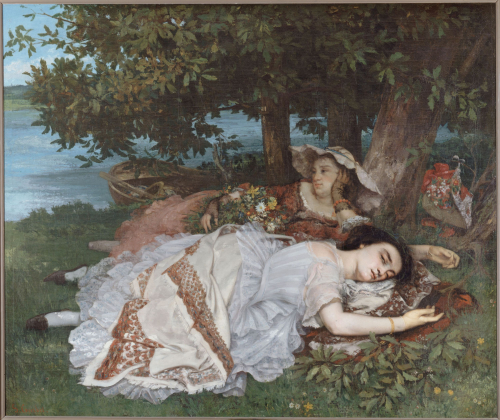 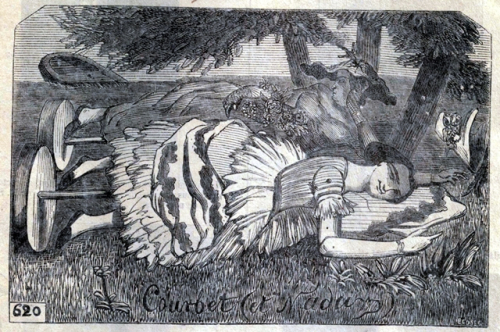