The British Library possesses a fine copy of the New Testament in Basque, printed at La Rochelle in 1571. The principal translator was Joanes Leizarraga (1506-1601). Born at Briscous in the French Basque province of Labourd, he trained as a Catholic priest. However, by 1560 he had converted to Protestantism, later taking refuge in the territory of Jeanne d’Albret, Queen of Navarre. She herself had converted to Calvinism in 1559 and was the leading promoter of the Huguenot cause.

Leizarraga undertook the translation in 1563 at the behest of the Synod of Pau of the Reformed Church of Navarre-Béarn. The work is dedicated to Jeanne d’Albret, who financed the translation, and her coat of arms appears on the title page. Subsequently, in 1567, she appointed Leizarraga minister of the church of Labastide in Lower Navarre in 1567. 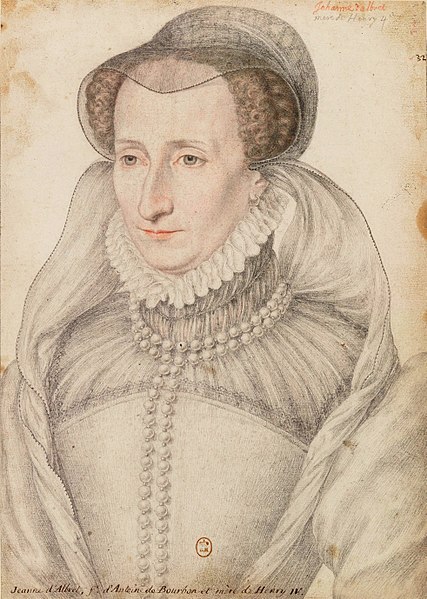 As elsewhere in Reformation Europe, making the Bible available to the laity in the vernacular was a priority. Leizarraga, however, faced particular difficulties. The earliest surviving book in Basque was printed in Bordeaux as late as 1545. No copy has survived of a reported second book, a Spanish-Basque catechism, printed in Spanish Navarre in 1561. He was thus unable to draw on an established form of written Basque in producing his translation. Moreover, at this period Basque was spoken in a number of dialects and varied noticeably from village to village, ‘almost from house to house’ as Leizarraga himself remarks in the preliminaries addressed to ‘Heuscalduney’, the speakers of Basque. He resolved to create a generalized form of the language, based on three dialects: largely that of Labourd, plus Lower Navarrese and Souletin.

He was assisted in this by four other Basque ministers, of whom at least two came from Soule. Leizarraga and his collaborators based their text on a version of the French Geneva Bible but with regard also to the Vulgate and to the Greek. In so doing they effectively created a Basque literary language, although one that took many words directly from Latin. This is evident in a comparison between the opening verses of the Lord’s Prayer in Leizarraga’s version (L) and one in modern Basque (B). The borrowings from Latin are in bold:

Subsequently, Basque developed in a less learned, more popular direction. Nonetheless, the work is of considerable value to grammarians and philologists when studying the language of Leizarraga’s day and its subsequent evolution.

The 1571 volume contains a number of additional texts. These include glossaries (e.g. of Hebrew and Greek proper names); a topical index to the New Testament; instructions on conducting various religious ceremonies, e.g. marriage; and a catechism for children. Two smaller works by Leizarraga were also published by the same press in La Rochelle in 1571: a religious calendar, including Easter Tables, and a Protestant catechism. 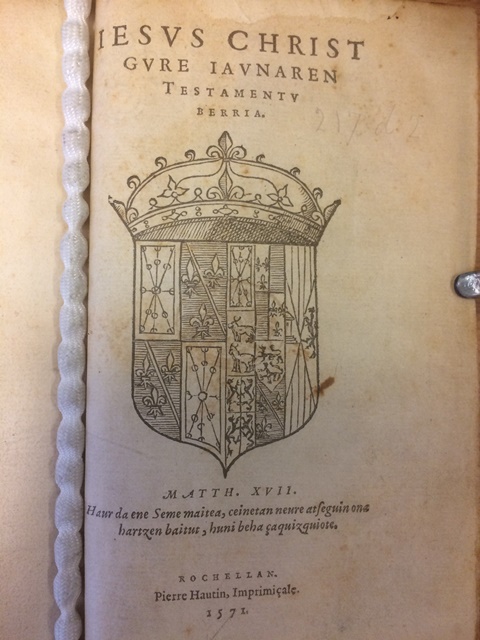 It has been estimated that some 25 copies of the 1571 Basque New Testament survive. Four are in the UK: at the British Library, Bodleian Library, John Rylands Library and Cambridge University Library (from the collection of the British and Foreign Bible Society, presented by Louis Lucien Bonaparte). The BL copy is in the King’s Library and was thus acquired for George III’s collection and then donated to the British Museum in 1823. Its earlier history is unknown. In recent years, two copies have been auctioned in London and acquired by institutions in the Spanish Basque Country. The copy that belonged to the Marquis of Bute was sold at Sotheby’s in 1995 and bought by a Spanish bank, the Caja de Ahorros de Navarra. Since 2014 it has been deposited in the Biblioteca Nacional de Navarra. In 2007 another copy was purchased at Christie’s by Euskaltzaindia, the Basque Language Academy. The high prices paid for these copies at auction, particularly in 1995, indicate the iconic status that Leizarraga’s translation now has for the Basque people.