On 31 October 1517 the Augustinian monk Martin Luther nailed a document to the door of the Castle Church in Wittenberg containing 95 theses for academic debate. The topic was the sale of indulgences – certificates granting believers time free from purgatory – in order to fund the rebuilding of St Peter’s Basilica in Rome. Luther was angry that the money of ordinary Christians was being taken to help a wealthy church establishment pay for a lavish building project, and he condemned the idea that divine forgiveness could be bought and sold rather than coming from the believer’s true spiritual repentance. This has come to be seen as the start of the Protestant Reformation that fractured the religious unity of Western Europe and changed the way many Christians viewed and practised their faith. Although many historians today doubt that Luther actually did nail his theses to the church door on this or any other date, let alone in the dramatic public gesture often depicted in later images, 31 October has been celebrated for centuries as the birthday of the Reformation and in this fifth centenary year commemorations have been held all over the world. 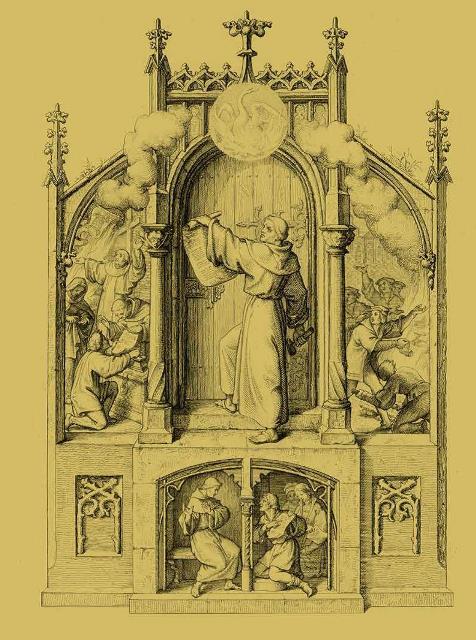 The British Library is playing its modest part with a display in our Treasures Gallery looking at Luther and his impact, which opened by happy coincidence on 31 October and runs until 4 February 2018. Exhibits include an original printing of the 95 theses (C.18.d.12.) and a copy of the indulgence that triggered Luther to write them (C.18.b.18.). 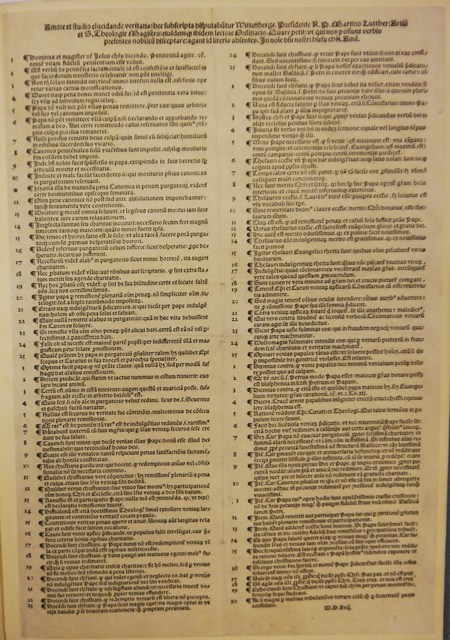 The huge debate and controversy stirred by the Reformation is illustrated by some of the polemical pamphlets of the time both for and against Luther. One of the most famous is Passional Christi und Antichristi, with woodcuts by Lucas Cranach the elder. The book compares the life of Christ and the perceived corruption of the Papacy, showing for example Christ’s explulsion of moneylenders from the temple contrasted with the Pope raking in money from the sale of indulgences. But Luther’s opponents could attack him with equal force. In keeping with the scatalogical humour of the age, Thomas Murner’s attack on Luther, Von dem grossen Lutherischen Narren (Strassburg, 1522; 11517.c.33) includes a caricature of Luther being pushed into a privy. 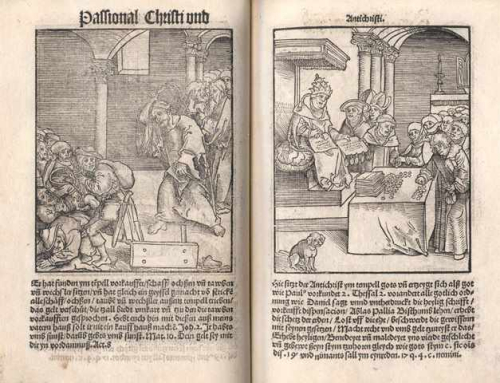 Christ and the moneylenders compared with the Pope and indulgence-sellers. Woodcuts by Cranach the elder from Passional Christi und Antichristi ([Wittenberg, 1521])  C.53.c.3.

In Germany, Luther is as celebrated for his contribution to the language through his Bible translation as for his influence on religious life. We show copies of his first translations of the New Testament and of the whole Bible, the latter in a copy with beautifully hand-coloured woodcuts. 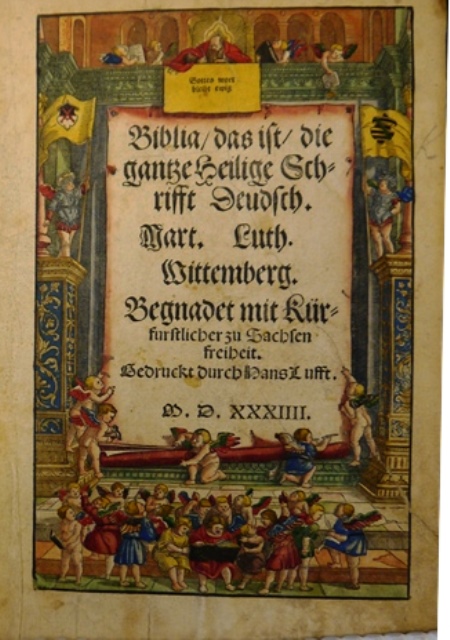 Hand-coloured title-page from the first complete edition of Luther’s Bible translation (Wittenberg, 1534) 1.b.9.

When his translations came under attack, Luther defended them in an open letter, the Sendbrief vom Dolmetschen, where he famously stated the need to listen to the everyday speech of ordinary people – ‘the man in the marketplace, the mother in the house, the children in the street’ – to create a vernacular Bible that would truly speak to them. His translation influenced William Tyndale who wanted to create an English Bible that ‘the boy that driveth the plough’ could read and understand. However, the copy of Tyndale’s New Testament which we are displaying to represent that influence belonged to someone much at the other end of the social scale: Queen Anne Boleyn. 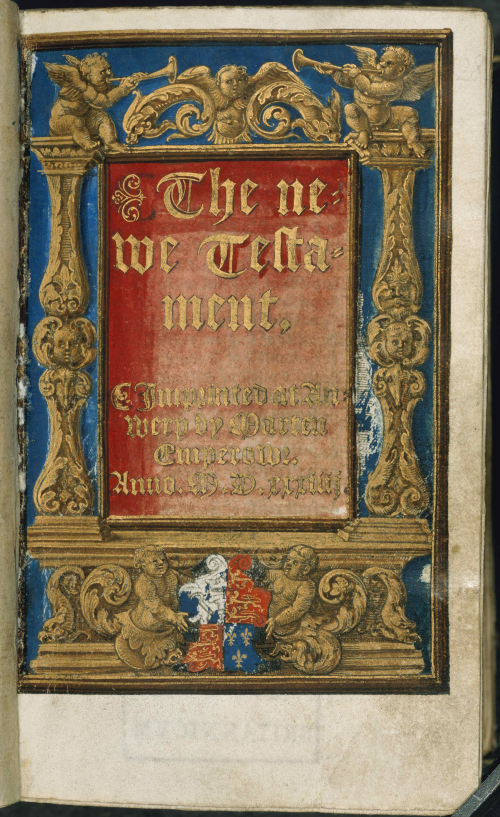 Illuminated title-page from Anne Boleyn’s copy of  The newe Testament, dylygently corrected and compared with the Greke by Willyam Tindale... (Antwerp, 1534) C.23.a.21.

This Bible is not the only English connection on display. We also show a copy of Henry VIII’s 1521 attack on Luther, Assertio Septem Sacramentorum (Rome, 1521; G.1210). This earned him the title ‘Defender of the Faith’ from Pope Leo X – a title he kept for himself as head of the English Church when he broke away from Rome over a decade later. We also show a later and happier example of Luther in England: a history of St George’s German Lutheran Church in the East End of London, established for the many German immigrants who came to London in the 18th and 19th centuries. The copy on display belonged to the Church’s own library which the British Library acquired in 1997. 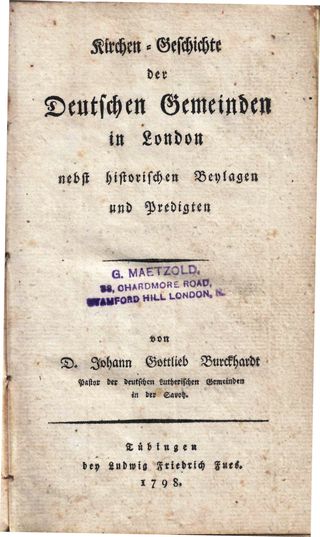 Title-page of Johann Gottlieb Burckhardt, Kirchen-Geschichte der deutschen Gemeinden in London (Tübingen, 1798) RB.23.a.16354. This copy, from the church’s library was  originally presented to the Pastor of St George’s Lutheran church in Whitechapel by the church organist.

The language of Luther’s Bible and the spread of Lutheran churches around the world are only a part of his legacy. Luther’s belief in the importance of music in Christian worship helped to create traditions of congregational hymn-singing and of church music which have influenced church music of many denominations and enriched the canon of Western classical music, in particular through the works of Johann Sebastian Bach. Luther’s most famous hymn ‘Ein Feste Burg’ is shown in an early edition along with the manuscript of one of Bach’s cantatas written for the Lutheran church of St Thomas in Leipzig. 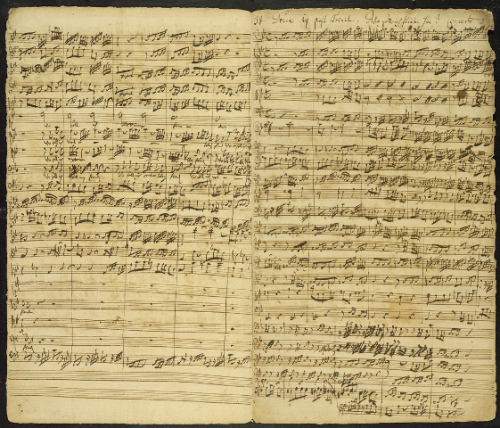 To mark ‘Reformation 500’ many souvenirs of all kinds have been marketed, and we show two examples, including the Luther figure created by the toy company Playmobil, which became its best-selling figure ever. But Luther memorabilia is nothing new: in the decades immediately after his death in 1546 Luther’s image began to appear on coins, medals, ceramics and bookbindings. Our contemporary souvenirs, like this year’s Luther commemorations, are part of a long tradition. 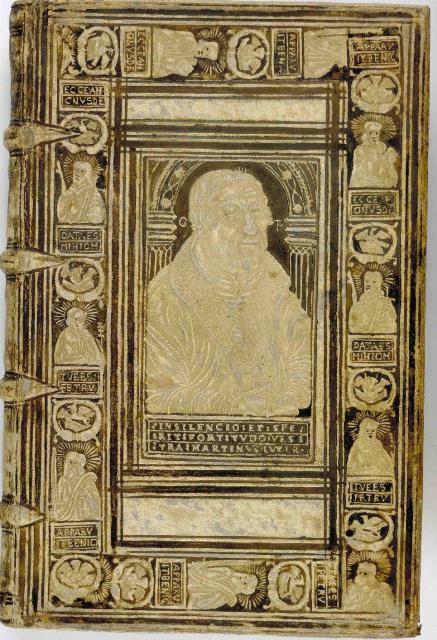 16th-century decorative bookbinding with a portrait of Luther, on a copy of Ius civile manuscriptorum librorum (Antwerp, 1567) Davis 628

The British Library will also be holding a Study Day on Monday 27 November looking at the 16th-Century Reformation outside Germany. Details and booking information can be found here. On the same day the British Museum and Library Singers will be performing a free lunchtime concert of music from and inspired by the Reformation in the Library’s entrance hall.

Luther’s signature from Zweig MS 200, a collection of handwritten dedications by Luther and other reformers.