Visitors attending the British Library’s event Greeks: Classic to Contemporary this evening will have the privilege of hearing Kamila Shamsie, among others, discussing her new novel Home Fire, a reworking of the legend of Antigone. It is appropriate that this timeless parable of civil disobedience should be re-examined on the 30th anniversary of the death of a man who brought it to the stage at a crucial point in European history: Jean Anouilh. It may seem odd that such a classic figure of the modern French theatre died as recently as 1987, but Anouilh began his creative life and established his reputation at a comparatively early age. He was born on 23 June 1910 in the little village of Cérisole near Bordeaux, and registered as the son of François Anouilh, a tailor of Basque descent, and his wife Marie-Magdeleine, a violinist. During the summer she would augment the family finances by playing in music-hall, casino and theatre orchestras in the seaside resort of Arcachon, and years later her son discovered that he was actually the result of an affair which she had had there. A more tangible influence was the exposure to the world of the theatre where young Jean attended rehearsals, read scripts, and even experimented with playwriting on his own account.

When Jean was eight the family moved to Paris, where he was educated at the famous Lycée Chaptal and gained admission to the Sorbonne to read law. The family’s finances, however, were still too precarious to allow him to continue his studies, and in his second year he left to seek employment with the advertising firm Publicité Damour. This apparent blow actually stood him in good stead and provided him with a training in pithy and concise use of language, equally applicable to writing for the stage.

After a period of military service and an early and troubled marriage to the actress Monelle Velentin, in 1935 Anouilh became secretary to the actor and director Louis Jouvet at the Comédie des Champs-Elysées. This brought him into contact with Jean Giraudoux, who encouraged him to return to writing, and in 1932 Anouilh completed L’Hermine (the British Library holds the 1934 edition: 12208.ee.151, and also a first edition of Y'avait un prisonnier (Paris, 1935; P.P.4283.m.(2.)). Anouilh also collaborated with the Russian director Georges Pitoëff, with whom he achieved his first commercial success, Le Voyageur sans bagages (Paris, 1937; P.P.4283.m.(2.)). He also worked closely with the set designer André Barsacq, director of the Théâtre de l’Atelier, who created an exquisite series of illustrations for a limited edition of Anouilh’s play L’Invitation au château. 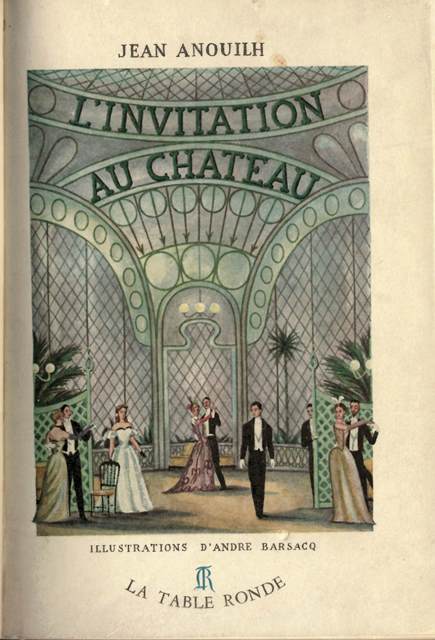 This play, memorably adapted by Christopher Fry under the title Ring Round the Moon (London, 1950; 11740.n.11) was one of many which gained wide popularity on the English-speaking stage.

It belongs to the group classified by Anouilh as his pièces roses, comedies with an almost whimsical fairy-tale quality, in strong contrast to his pièces noires, where a darker, more cynical tone prevails. The bitter years of the German occupation and the Vichy regime had led Anouilh to reflect on the recurrent motifs and archetypes of human folly and cruelty in history and myth, crystallized in a series of dramas including Antigone (Paris, 1946; W22/1129) and L’Alouette (1952; BL copy Paris, 1953; 11740.m.34) dealing with the conflicts surrounding idealistic young protagonists facing a choice between integrity and death in a corrupt society. Despite belonging to a third group described by the author as pièces costumées, this play, like Becket, does not merely seek refuge in the safe past but emphasizes the eternal and vividly topical nature of the moral choices which the characters confront.

Anouilh was equally unsparing of himself in his final cycle of pièces secrètes in which he analyses the predicament of the dramatist or director and the dilemmas which it poses. As well as the conflict between life and art, these were also of a political nature; Antigone, for example (a theme which had also been interpreted by Brecht) escaped censorship under the Vichy government and thus attracted criticism on the grounds of moral ambivalence, as did Anouilh’s public disagreements with Charles de Gaulle and his support of the author Robert Brasillach, executed in 1945 for collaboration with the Nazis. Despite the numerous honours which Anouilh received, these considerations may have had a bearing on the fact that despite being shortlisted for the Nobel Prize for Literature in 1962, he never won it. Moreover, in the 1960s, as the Theatre of the Absurd gained ground, his plays began to lose their appeal despite his own highly individual approach to existential crises as profound as anything to be found in the works of Beckett or Ionesco (both of whom he defended); the Belgian critic Hubert Gignoux, for example, sums up Antigone as ‘drame psychologique en marge d’une tragédie’. 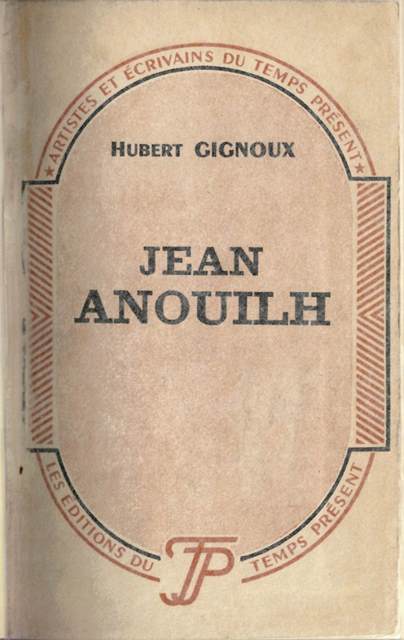 However, he retained his vitality as a man of the theatre and the cinema well into his seventies, turning to directing (he was also a translator of Shakespeare and Oscar Wilde). Although he remarked in 1946 to Gignoux that he had no biography and was content with the fact, he could surely have had no quarrel with his biographer Anca Visdei’s comment in her biography of Anouilh: ‘Anouilh est devenu omniprésent dans la vie théâtrale française … Incontournable.’

Posted by Olga Kerziouk at 3:15 PM