Text into image: Quevedo and the Table of Cebes

As topothesia is the less common, look it up in your copy of Erasmus De copia:

Quae si verae sint, τoπoγραφιας appellari volunt, sin fictae, τoπoθεσιας. Prioris formae sunt: Carthiginis et portus apud Maronem descriptio; apud Plinium in Epistolis Laurentis villae; apud Statium Surretinum Polii et Tibertinum Manlii; posterioris: sedes Somni apud Ouidium; domes Famae et regia Solis apud eundem; inferorum et Caci domus apud Vergilium; Tenari apud Statium; domus apud Lucianum; regia Psyches apud Apuleium.
[If these descriptions are true, they are called topographias; if imagined, topothesias. In the first category are: the description of Carthage and its port in Virgil; of his Laurentine villa in the letters of Pliny; the villas of Polius in Sorrento and Manlius in Tivoli in Statius. The imagined include: the House of Sleep, the House of Fame, and the Palace of the Sun in Ovid [Met. 11.592; 12.39; 2.1]; Hell and the House of Cacus in Virgil [Aen. 6.268; 8. 225 ss]; Taenarum in Statius [Thebaid 2.32]; the house in Lucian [De domo]; and the Palace of Psyche in Apuleius [5.1-2].]

As nobody has seen the next world and lived to tell the tale, descriptions of the Other Side count as imagined descriptions.

A once well-known ekphrasis is the Table (or Tablet) of Cebes, alias Pinax. This describes a metal plate on which is depicted the whole life of man:

It was rather a circular enclosure, with two other such enclosures within it, one larger than the other. On the first circle was a gateway, near which was pictured a crowd of folk, and within it we saw a multitude of women. [...]
[An old man explains:]
This circle is called life. The great crowd you see standing beside the gate are those about to journey into life. The old man standing above the crowd holding a paper in his hand [...] is called Genius. He is giving advice [...]
That woman of affected appearance and smooth, plausible manner [...] is called Deceit and leads all men astray [...]

So, decidedly a text: what image could incorporate so much teeming detail?

But many people took ekphrasis as a challenge: various sculptors attempted the Shield of Achilles on the basis of Homer’s text; and some tried to make visual the Table of Cebes.

An example is the image below: 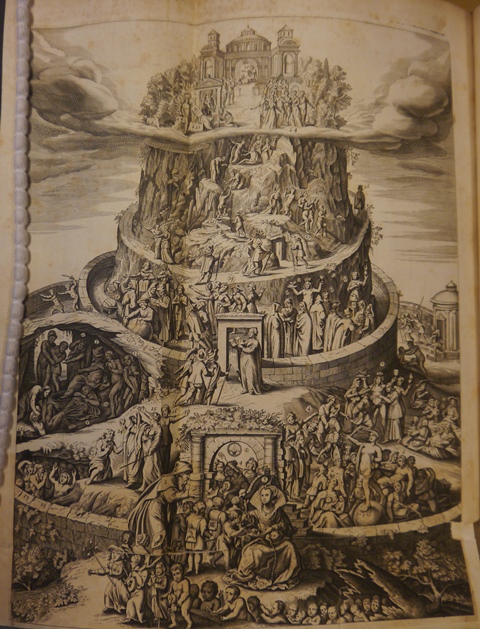 All educated people in the 17th century knew the Pinax: Milton, in his treatise Of Education includes it among the ‘easy and delightful books of education’.

Francisco de Quevedo was no exception.

In 1627 he issued his Sueños (Dreams), apocalyptic visions, loosely arranged but always biting vignettes of the folly and sins of man and woman, grotesque in a very baroque way. They were censored in subsequent editions because among other things Quevedo attacked priests. Like the Good Lord, he was no respecter of parsons (Acts 10.34), a biblical pun that would have been OK in the 15th century but would have got me into trouble in the 1600s.

They were translated by Sir Roger L’Estrange.

The first illustrations of the Dreams came in Brussels in 1669 in vol. I of Quevedo’s works. 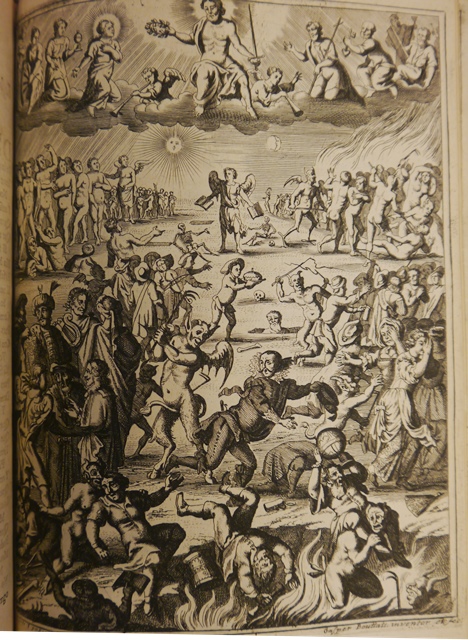 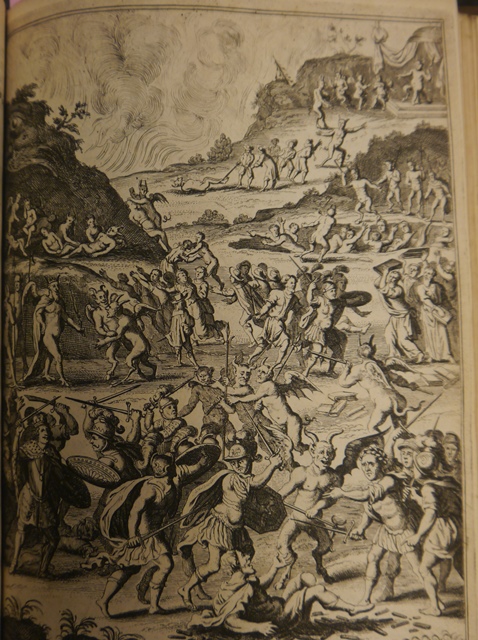 I was struck by the resemblance between the engraving of the Table and the depiction of Hell and the Last Judgment in the Dreams, particularly the numerous figures crowded into a steeply raking landscape.

The resemblance is almost certainly because both images are the work of artists from the Low Countries. Perhaps when reading the text of the Dreams Bouttats’s visual memory recalled images of the Pinax.

The Characters of Theophrastos. The Mimes of Herodas. The Tablet of Kebes. Translated with an introduction by R. Thomson Clark and 34 full page illustrations from Francis Howell’s edition of 1824. (London, [1909]) 8464.aa.28.

Posted by Olga Kerziouk at 1:55 PM