Exhibiting Martin Luther – then and now

Our current Treasures Gallery display focuses on Martin Luther to mark the 500th anniversary of the Reformation. But this is not the first time that our holdings have been showcased for a Luther-related anniversary.

In 1883, George Bullen, Keeper of the Department of Printed Books in the then British Museum Library, organised an exhibition to mark the 400th anniversary of Luther’s birth. In his introduction to the short accompanying catalogue (‘price twopence’), he notes that the anniversary celebrations in Germany had ‘attracted … much notice and sympathy in this country’ and says that a suggestion for an exhibition ‘formed of the numerous books, pamphlets and broadsides contained in the Museum’ had been ‘cordially adopted’ by senior staff there. 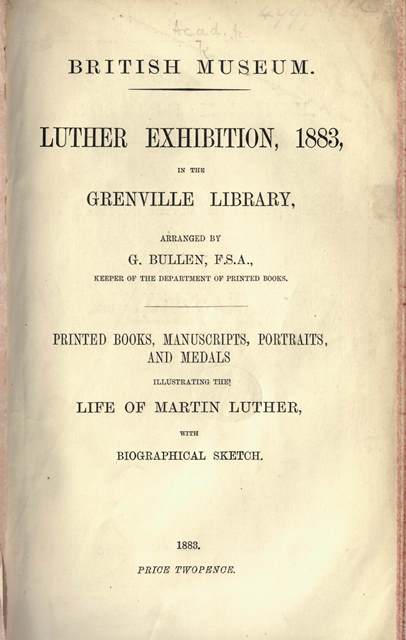 Looking at the catalogue, it’s gratifying to know that, 134 years later, the team behind our display selected many of the same items to exhibit as Bullen and his colleagues did. Of course it’s also inevitable since some items were such obvious choices: the 95 theses, the Indulgence that triggered them, the Papal Bull condemning Luther, the ‘September Testament’, and Luther’s first complete German Bible. A surprising omission in 1883 was Luther’s response to criticisms of his Bible translation, the Sendbrief von Dolmetschen – perhaps the more so since Bullen did show Hieronymus Emser’s attack on Luther’s translation (pictured below). 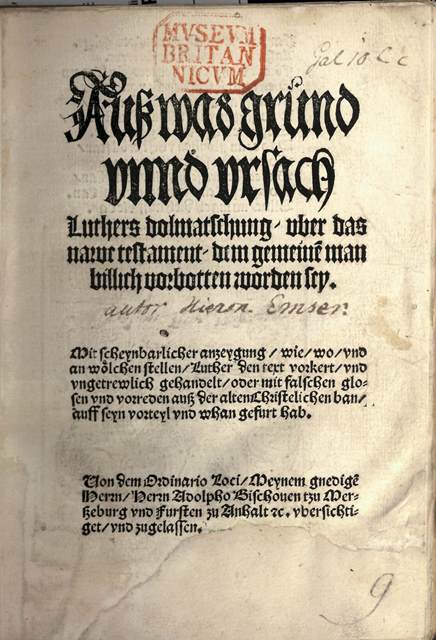 Two other choices we shared were an edition of Henry VIII’s Assertio septem sacramentorum and a book-binding stamped with portraits of Luther and Philipp Melanchthon, but those currently on display are definitely not the same as the ones shown in 1883: we have a Rome edition of the Assertio while Bullen chose a London one, and the binding we are displaying comes from the collection of Henry Davis which was bequeathed to the British Library in 1977.

Bullen had more space than our modest four cases: his exhibition was mounted in the Grenville Library, to the right of the Museum’s entrance hall (now a gift shop), where he was able to show a wider range of items. In some cases these helped add context to other exhibits. For example there were copies of other writings against indulgences alongside the 95 theses, including German-language pamphlets which took Luther’s arguments to a wider audience. Likewise the Assertio septem sacramentorum was accompanied by the pamphlet De Captivitate Babylonica Ecclesiae which inspired Henry’s response, and by Luther’s own reply to the Assertio. 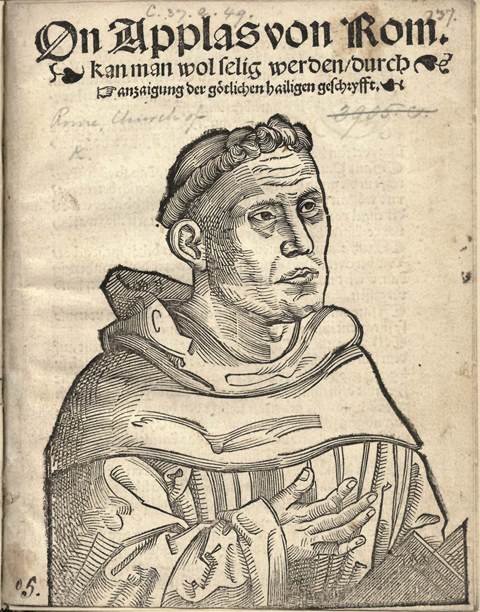 On Aplas von Rom kan man wol selig werden ([Augsburg, 1520?]) 3906.b.55. A German pamphlet against indulgences, with a portrait of Luther on the title-page.

The 1883 exhibition also had space for more Bibles, including some of some of the first sections of Luther’s Old Testament to be printed, and the splendid Bible of 1541 with manuscript inscriptions by Luther, Philipp Melanchthon and other reformers. 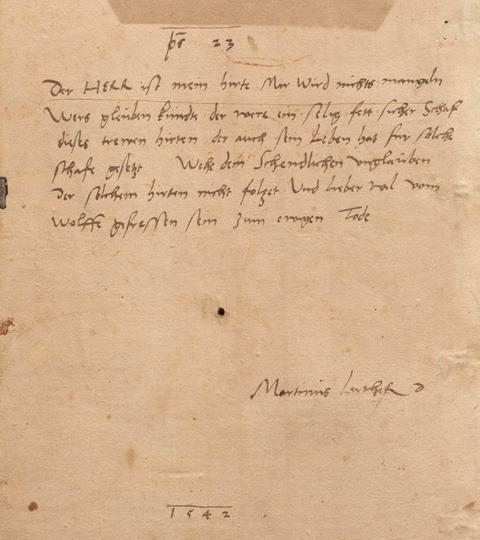 Inscription in Luther’s hand, with the opening of Psalm 23 and four lines of commentary. From the first volume of Biblia, das ist, die gantze Heilige Schrift (Wittenberg, 1541) 679.i.15

Other exhibits from 1883 touch on areas we couldn’t accommodate, including pamphlets by Luther on theological topics, works of scriptural exegesis, and copies of his services for baptism and the mass. Bullen also found room for some manuscript letters, including one from Luther to Thomas Cromwell (MS Harley 6989, f.56) which had in fact been on my initial longlist but missed the final cut. 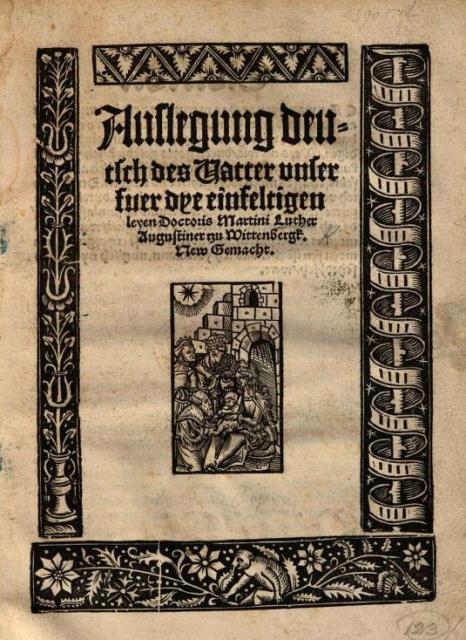 One theme which we chose to feature and Bullen did not was pro-and anti-Lutheran visual propaganda, such as the Passional Christi und Antichristi ([Wittenberg, 1521]; C.53.c.3.) which compares the perceived corruption of the papacy with the life of Jesus, or Thomas Murner’s attack on Luther, Von dem grossen Lutherischen Narren. Perhaps these were seen as too frivolous or too crude for contemporary tastes. A number of pictures from the Department of Prints and Drawings were shown, but these were nearly all straightforward portraits rather than propaganda prints or caricatures. 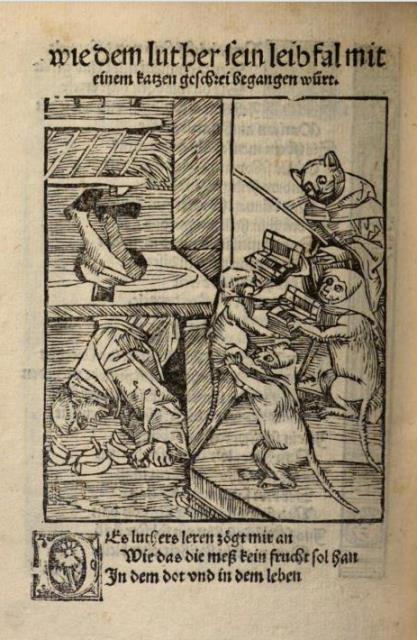 Too crude for Victorian visitors? An image of Luther being stuffed into a privy, from Thomas Murner, Von dem grossen Lutherischen Narren (Strassburg, 1522) 11517.c.33. Shown in 2017 but not in 1883

I suspect that our final exhibit of a Playmobil Luther figure and a Luther rubber duck (below) would certainly have raised eyebrows in 1883, but the display then also included commemorative souvenirs, albeit in the less frivolous form of items from the Department of Coins and Medals. And placed on a table in the gallery was ‘a statuette of Luther modelled in terra-cotta by Mr Charles Martin, after Lucas Cranach’s portrait, lent for exhibition by Mr Martin.’ No doubt a more realistic and sober representation than our souvenirs, but that in itself shows how attitudes to the culture of commemoration have changed since Bullen’s day. 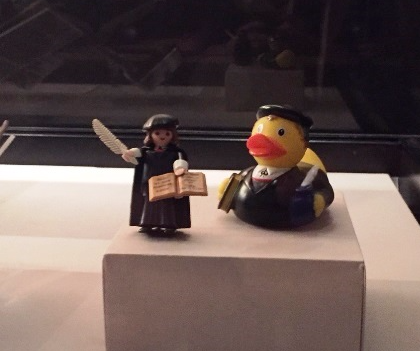