Heroes and victims of the Revolution

In November 1918, the first anniversary of the Bolshevik military insurrection (as the October Revolution was then known) was ‘celebrated in style’ in Soviet Russia. Around 3,500 metres of red fabric was allocated for decorating the Kremlin in Moscow. Over 400 metres of ropes were supposed to hold posters and panels during the celebration. On 7 November 1918 Lenin, who had made a remarkably prompt recovery after being seriously wounded in an assassination attempt some two months earlier, managed to give several speeches in different parts of Moscow. A large memorial plaque in commemoration of those who lost their lives “in the struggle for peace and the brotherhood of nations” was unveiled on Red Square and a temporary monument to Karl Marx and Friedrich Engels was also erected in the centre of the capital. A mass show “The Pantomime of the Great Revolution” was staged in the streets. Such mass festivals and reenactments of “revolutionary events” would soon become a usual feature of each commemoration and celebration in the early years of Soviet Russia. You can see photographs of those first anniversary celebrations here.

Those Russian artists who embraced the Bolshevik Revolution were happy to glorify it in arts. Vladimir Mayakovski was quite active in promoting the celebrations. For the first anniversary he wrote a ‘comic opera’ – Misteriia-buff (Mystery-Bouffe) – which was accepted to be part of the festivities. Staged by the famous theatre director Vsevolod Meyerhold with designs by Kazimir Malevich the play was premiered on 7 November 1918 and then shown two more times. The author also appeared on stage as a ‘common man’, but then had to play a couple more roles as some actors did not turn up. 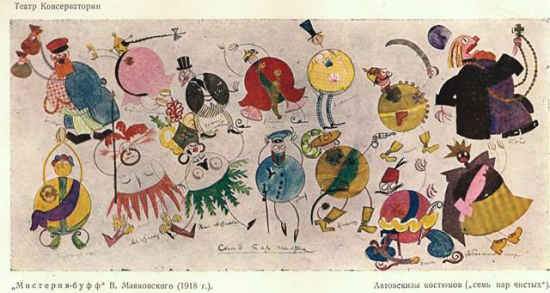 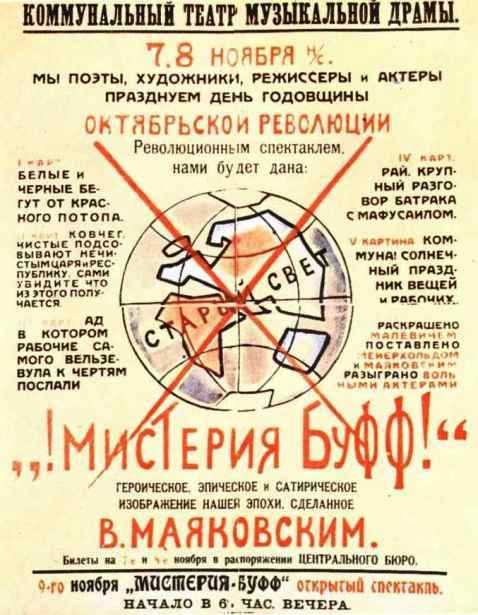 Seven pairs of ‘clean’ (‘bloodsuckers’) and seven pairs of ‘unclean’ (‘workers’), as well as The Hysterical Lady, The Common Man (The Man of the Future), Devils, Saints (including Leo Tolstoy and Jean-Jacques Rousseau) performed a ‘satirical drama’ in The Entire universe, The Ark, Hell, Paradise, Land of Chaos and finally – in The Promised Land. By the end of the year the play was published as a separate edition. 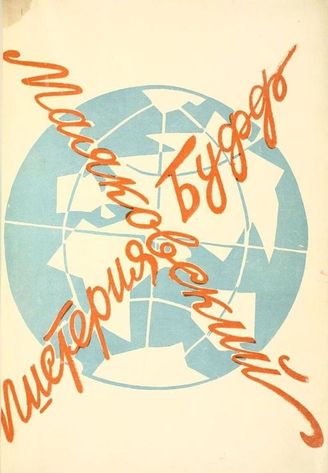 The Revolution affected everyone in the country, but it was also important for avant-garde artists and the Bolsheviks as well to stress the final divide between the past and the present, the rich and poor, the victors and losers, the heroes and victims and leave no space in between so that each and every one should clearly take sides. This irreversible split was also presented in another work by Mayakovski created for the anniversary – the album of drawings and short verses Geroi i zhertvy revoliutsii (‘Heroes and Victims of the Revolution’; Cup.410.c.81). Heroes (Worker, Red Army Soldier, Farm Labourer, Sailor, Seamstress, Laundress, Motorist, Telegraph Operator and Railway Worker) and Victims (Factory Owner, Banker, Landlord, Kulak, Lady, Priest, Bureaucrat, General and Merchant) are presented by four artists: Kseniia Boguslavskaia , Vladimir Kozlinskii, Sergei Makletsov and Ivan Puny.

Below are four of the album’s ‘Heroes’: the Red Army soldier, Laundress,  Motorist and Railway worker: 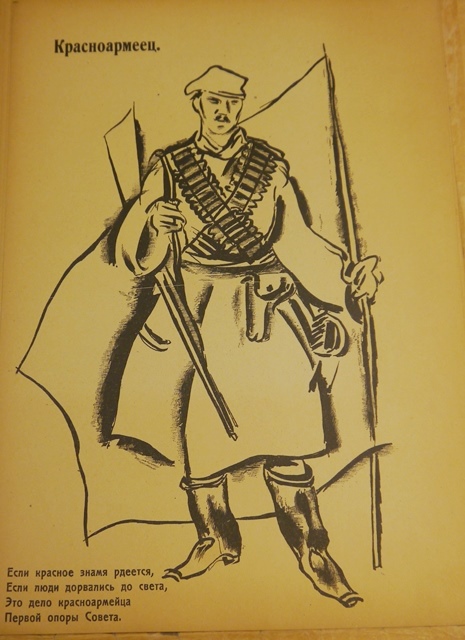 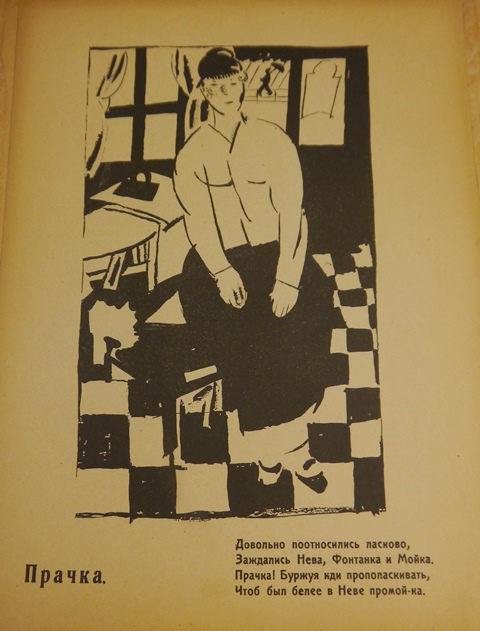 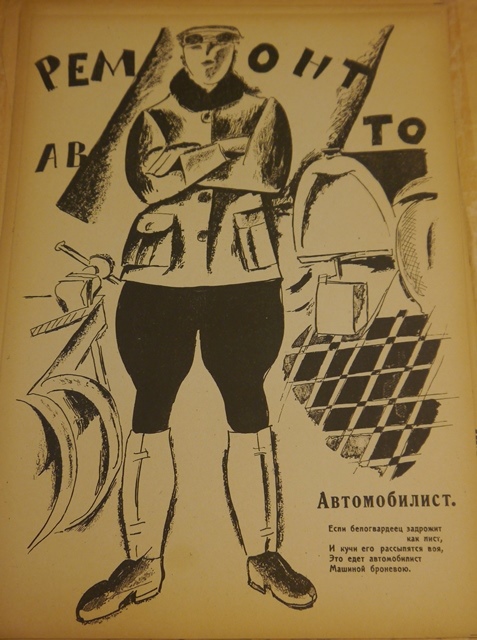 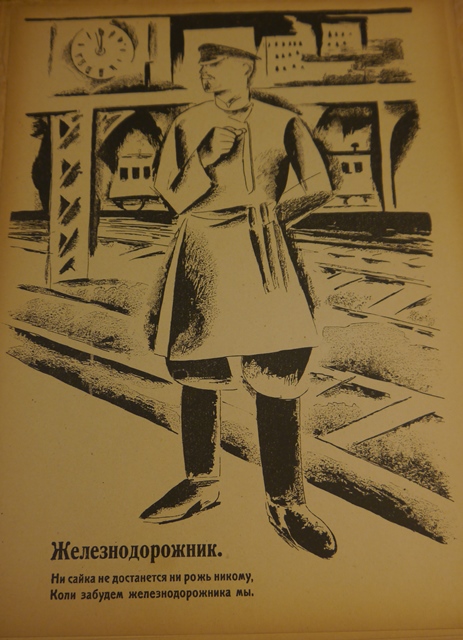 And here are some of the ‘Victims’: Merchant, Kulak, Lady and Priest 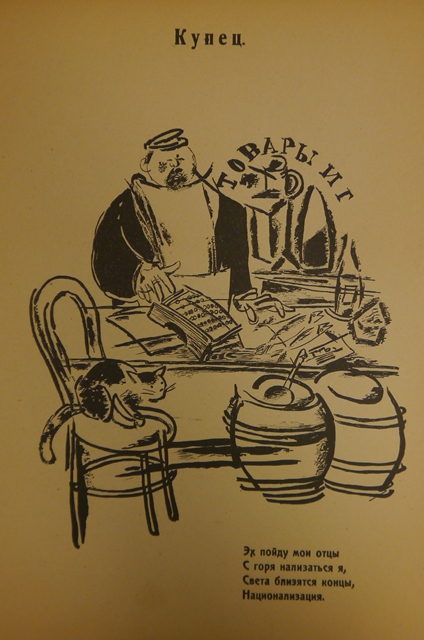 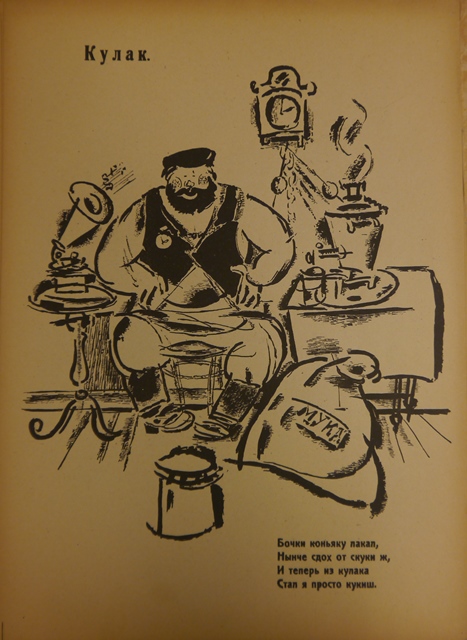 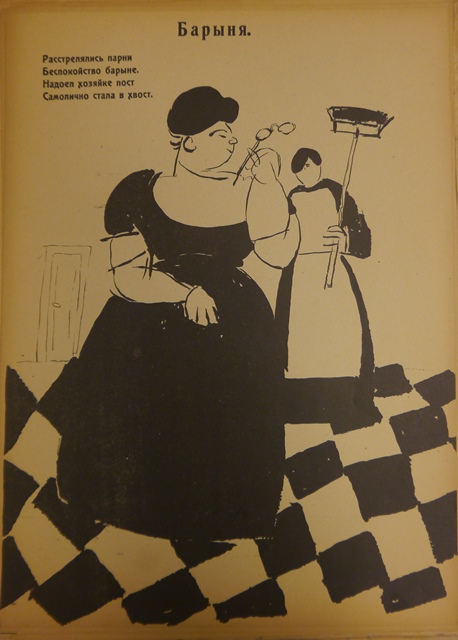 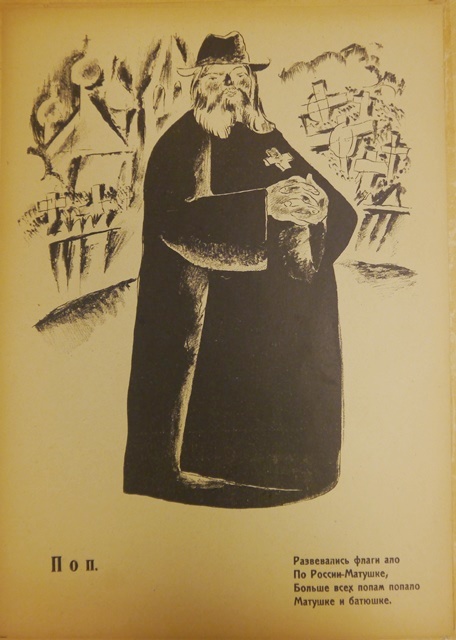 It was proven before and happened this time again – Revolution devours its children. In 1919, Boguslavskaia and Puny left Russia for good; in 1930 Mayakovski committed suicide; in 1935, Malevich died of cancer having been banned from exhibiting ‘bourgeois’ abstract art; and in 1940, Meyerhold was shot dead in Stalin’s purges as an ‘enemy of the people’.

Posted by Olga Kerziouk at 9:49 AM