‘The Gospels are as good in Danish or German as in Latin…’: the earliest Nordic vernacular Bibles

Many factors contributed to the spread of the Reformation in the Nordic region from the 16th century onwards. The developing ‘national’ monarchies, with ever more centralized rule, gradually saw the Catholic Church as the main obstacle to the consolidation of wealth and power. This disillusionment with the Catholic Church was also of course a result of the dissemination of new Lutheran teachings, by German preachers who had moved north, by Scandinavian preachers who had been taught in Lutheran contexts, or often by Hansa merchants spreading the faith.

In the process of reforming the North, as elsewhere, vernacular translations of scripture were significant. As Bent Noack writes, ‘it is not sufficiently emphasized that the printing of vernacular texts long preceded the Reformation in many countries’ (The Cambridge History of the Bible, p. 423): there are mediaeval Danish and Swedish biblical manuscripts based on the Vulgate and, as early as 1514, Christiern Pedersen (c.1480-1554) had translated parts of the New Testament. In a preface to his 1515 translated Book of Homilies, Pedersen makes plain the richness of vernacular translations: ‘Nobody ought to think that the Gospels are more sacred in one tongue than in another: they are as good in Danish or in German as they are in Latin, if only they are rightly interpreted’. Soon after Luther’s 1522 translation of the New Testament there followed Danish (1524) and Swedish (1526) versions. So, Noack writes, these New Testaments ‘were called forth by the Reformation in Germany and served to prepare the soil for it in Scandinavia’, showing how vernacular translations preceded and then pushed forward the Reformation in the North, which was only made official by the establishment of a Lutheran State Church from 1536 (in Denmark and Sweden).

With state-sponsored Lutheranism came the means for producing complete Bible translations. The British Library holds examples of most of the earliest printed Bibles from the Nordic region. The earliest complete one was produced in Sweden. The ‘Gustav Vasa Bible’ (1541), named after the king who commissioned it, was translated by the brothers Laurentius and Olaus Petri and was heavily based on Luther’s translations. The German influence spread to the book’s production, style and typography, as the printer Georg Richolff of Lübeck was invited to Uppsala to print it. Richolff brought with him new type material and a range of woodblocks, including some by Lucas Cranach. In the image below, we see an elaborate architectural title frame for the New Testament and the German Fraktur type used for the title itself. 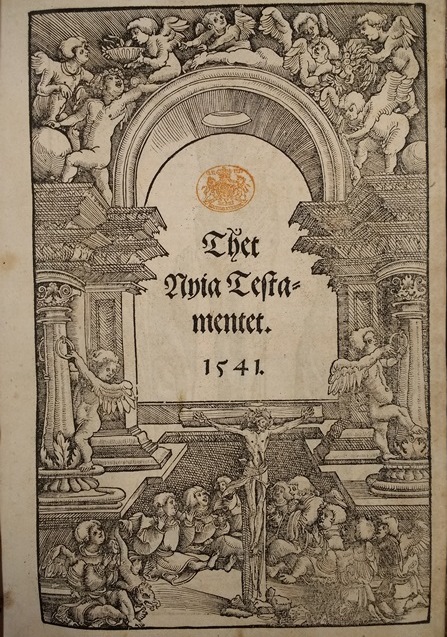 The British Library has another copy of this 1541 New Testament (1.b.3.), bound separately, which contains copious  manuscript annotations, some dated 1639, about which we know very little (below). What scholars consistently emphasise with this, and every other, early vernacular Bible is how the language and style of the translation influenced the standard modern languages and, in the case of Swedish, ‘the orthography and use of accents made its difference from Danish more distinctive’ (A History of the Book in 100 Books, p. 125). The first complete Danish Bible, known as the ‘Christian III Bible’, after the King of Denmark-Norway, was printed in 1550. The publisher of the Low German Luther edition, Ludwig Dietz, printed it in Copenhagen and the translation is generally ascribed to Christiern Pedersen, though it remains uncertain. 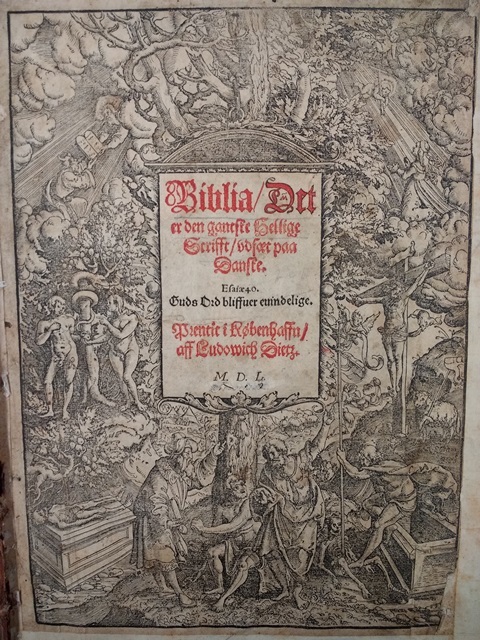 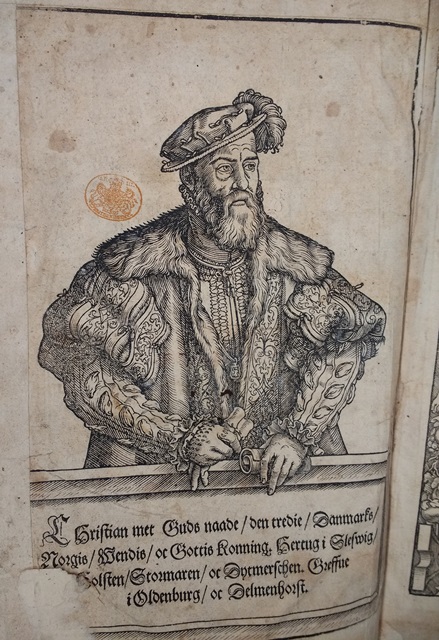 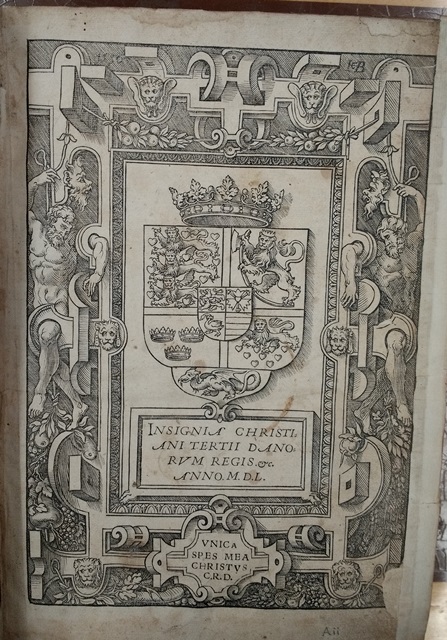 In Iceland, under the rule of Denmark at the time, book production begun with a press established by the last Roman Catholic bishop, Jón Arason, at Hólar. Noack describes the Reformation Bible as ‘its most outstanding specimen’ (Cambridge History, p. 140). It is known as the Guðbrandsbiblía (Gudbrand’s Bible), after Guðbrandur Þorláksson, the Bishop of Hólar at the time of its publication in 1584, who executed the translation and designed and engraved most of the woodcuts. A laborious project, it took 2 years to print 500 copies. Our copy is one of the 121 printed books donated to the British Museum by Joseph Banks in 1773, following an exploratory trip to south-eastern Iceland in the previous September. 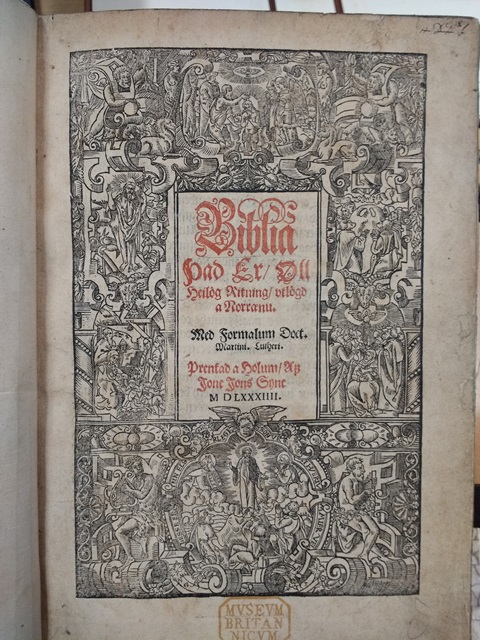 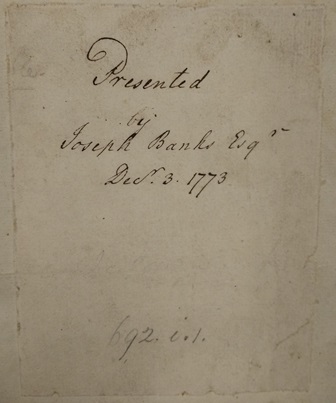 Like the Swedish and Danish translations before it, the Icelandic Bible is said to have contributed enormously to the development of the modern standard language. Yet, even more emphatic is the influence of the vernacular Bible translation on the Finnish language, as it represents the first ever appearance of the language in print. Mikael Agricola (c.1510-1557) began translating Scripture following a period of study in Wittenberg and we hold a 1931 facsimile edition of his 1548 New Testament (Se Wsi Testamenti, Helsinki, 1931; 3706.cc.10). The first complete Finnish Bible dates back to 1642 and was printed in Stockholm in an edition of 1200 copies. The task of the printer, Henrik Keyser, was made more difficult by the fact that none of the compositors knew any Finnish! The BL also holds the first Finnish Bible printed in Finland itself (Turku, 1685, BL 219.h.13). 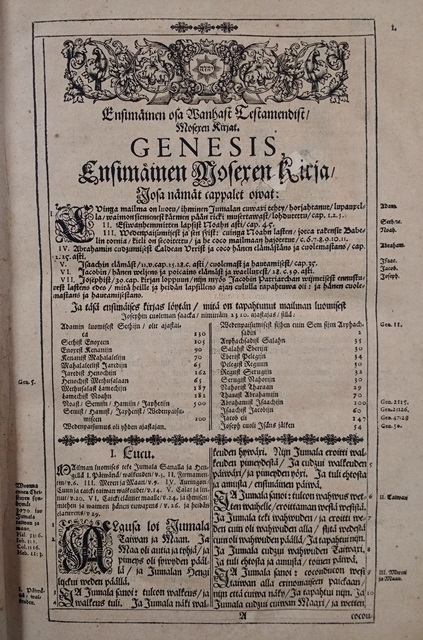 Genesis, chapter 1 (above) and an illustration of David and Goliath (below) from the first complete Bible in Finnish, Biblia, se on: Coco Pyhä Ramattu, Suomexi (Stockholm, 1642), C.108.aaa.12 To bring this brief survey of the earliest vernacular Bibles to a close, then, we should emphasize that these Bibles are not only the literary foundations of the Reformation but also the foundations of standard modern languages in the Nordic region. Thanks in part to the (mostly) consistent presence of a Lutheran State Church over the last four centuries, in the words of T.K. Derry, ‘the view of religion which was shaped in Germany still receives an ampler recognition in Scandinavia than in its homeland’ (A History of Scandinavia, p. 95).