The Scythians of the North Pontic Area

The Scythians (Σκύθες), currently the subject of an exhibition at the British Museum, were nomadic herdsmen who spoke an Iranian language and inhabited the steppes of modern Ukraine, Moldova and southwestern Russia (the Don River basin). The Scythians appeared in the territory of modern Ukraine in the 7th century BC, having come from the steppes of Inner Asia. After a while the bands of Scythian warriors crossed the Caucasus Range and attacked the states of the Middle East – Urartu, Assyria, Media, Babylonia. Scythian warriors are even mentioned in the Bible (Colossians 3:11). Almost 30 years the Scythians terrorized the Middle East, and then returned to the North Pontic steppes. Here the Greek city-colonies such as Tyras, Olbia, Chersonesus and Panticapaeum, the capital of the Bosporan kingdom, were their neighbors and trading partners. 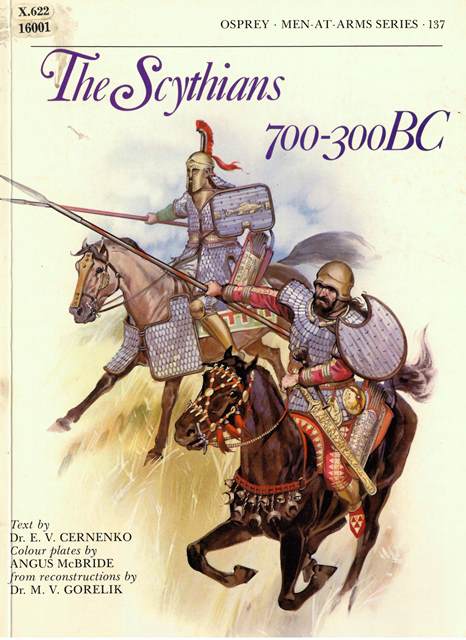 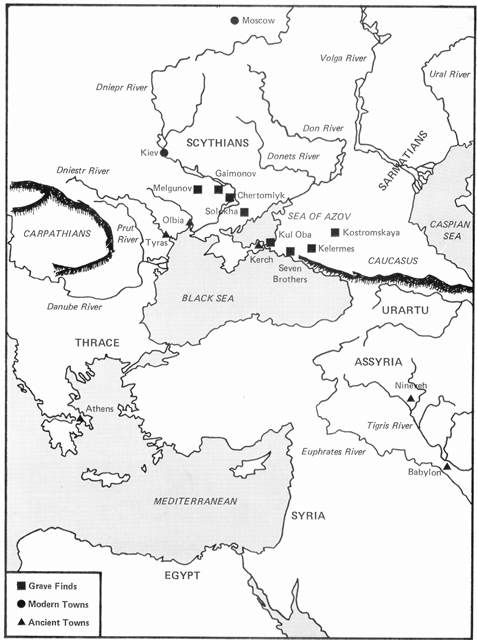 At the end of the 6th century BC the Scythians became well known throughout the civilized world, having defeated the Persian king Darius I. A century later the “Father of History”, the Greek scholar Herodotus, wrote about this war. He composed a detailed description of Scythia including its borders, which generally coincide with the borders of modern Ukraine, the names of neighboring tribes, the story of the campaign of Darius, the retreat of the Scythians and the further expulsion of the Persians, the description of Scythian life and the burial of Scythian kings in barrows. 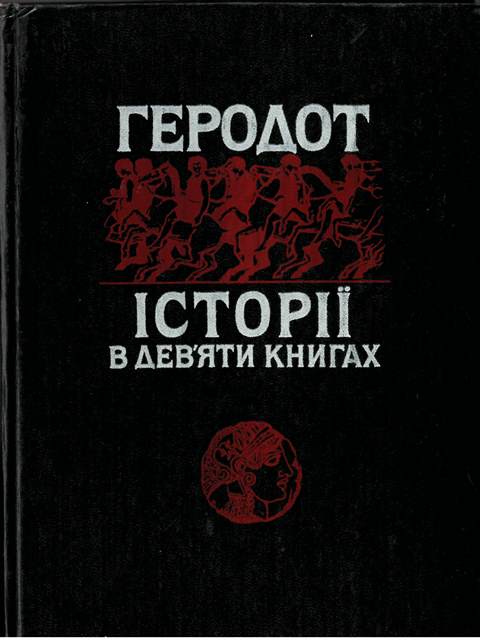 The Scythians were known in the Hellenic world first of all as skilful mounted archers and brave warriors. Scythian mercenaries served in Athens as guardians of order; they were a kind of police. Weapons of Scythian types – short swords, bronze arrowheads, scale armour – have been found not only in Scythia but also in Central Europe, Iran, and Central Asia – wherever the Scythian warriors sent their horses.

Except for the work of Herodotus, the only source for the study of Scythian nomads is their archeological sites – the burial mounds known as kurgans. In the North Pontic Steppes stand thousands of these kurgans of varying heights – from 20-metre-high royal tombs to the low mounds of ordinary herdsmen which are hardly visible. In fact, the archeology of Ukraine, then part of the Russian Empire, began with the excavation of Scythian royal burial mounds and Greek cities in the 18th century.

The first of these – Lyta Mohyla – was excavated in 1763 on the orders of General A.P. Melgunov near the modern city of Kropivnitsky. In this kurgan (known also as the Melgunov Kurgan), dated to the early 6th century BC, evidence of the Near Eastern campaigns of the Scythians – a sword, battle-axe and throne decorated with gold in the Assyrian-Urartian manner – was discovered. It is interesting that the first Scythian kurgan to be excavated was found to be the oldest. 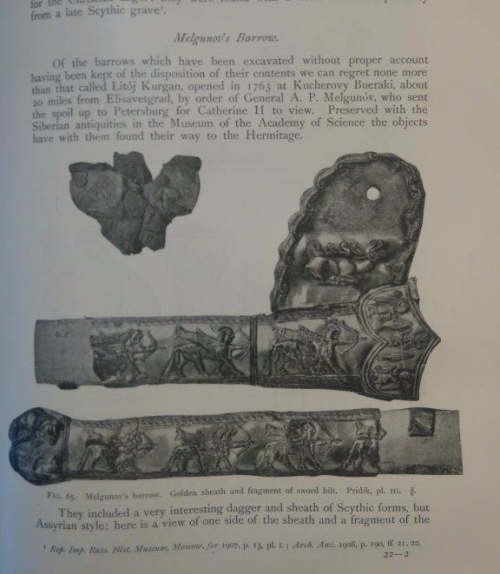 Description of  a golden sheath and fragment of sword hilt from Melgunov’s kurgan. From Ellis H.Minns, Scythians and Greeks. A survey of ancient history and archaeology on the north coast of the Euxine from the Danube to the Caucasus. (Cambridge, 1913). 7706.i.19.

In the 19th-early 20th century, such famous kurgans of 4th-century BC Scythian kings as Kul-Oba (1830), Chortomlyk (1862-1863), Solokha (1912) were excavated in the territory of modern Ukraine. It was in these barrows that masterpieces of jewellery with the images of Scythians were found: the golden cup from Kul-Oba, silver amphora and golden gorytus (Scythic bow-case and quiver in one)  from Chortomlyk, and a silver cup and golden comb from Solokha. These finds then went to the Hermitage in St. Petersburg where they are still kept. 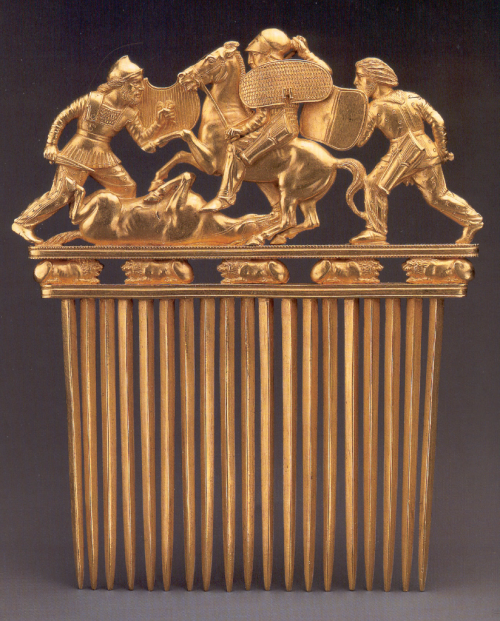 Gold comb with the image of a battle scene. 430-390 BC. From the Solokha kurgan, Zaporizhia Region. Found by N.I.Veselovsky in 1913 during excavations conducted by the Imperial Archaeological Committee (State Hermitage Museum, St Petersburg; photo from Wikimedia Commons)

The excavations of Scythian royal kurgans were continued in 1958 by the patriarch of Ukrainian Scythian studies, Professor Oleksiy Terenozhkin, who discovered the Melitopolsky Barrow. 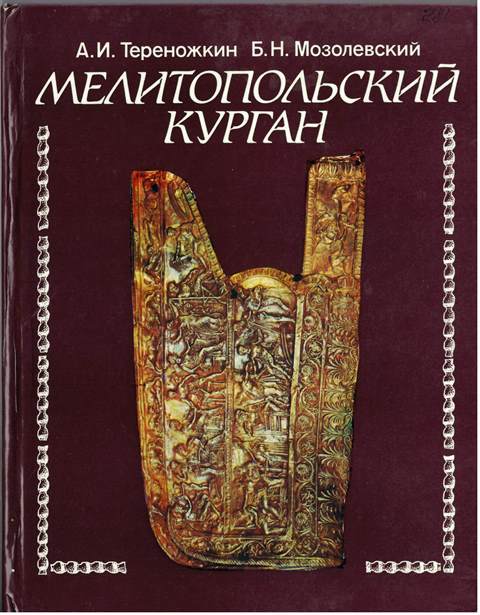 Next came the sensational finds from the Haymanova Mohyla near Zaporizhia (1969), Tovsta Mohyla near Nikopol (1971), Berdyansk Kurgan (1979), and Bratolubivka (1990). At the same time, hundreds of low mounds of ordinary Scythians were unearthed in the Dnipropetrovsk, Zaporizhia, Kherson, Mykolayiv, and Odessa regions of Ukraine. 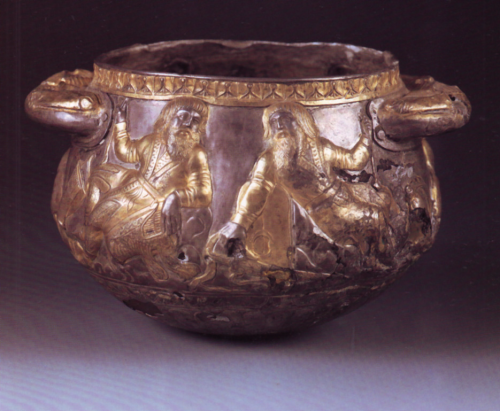 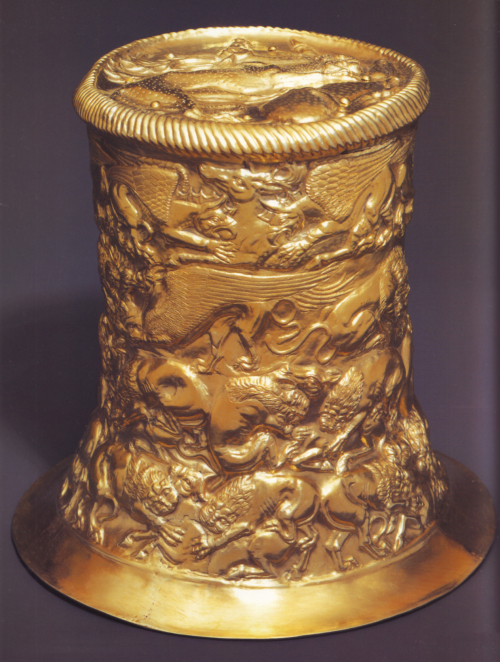 Gold ritual vessel with relief images of griffins, lions, horses and deer. 5th century BC. From the Bratolyubivka Burial Mound, Kherson Region. Excavated by A.I.Kubyshev, 1990. (Institute of Archeology of the National Academy of Sciences of Ukraine, Kyiv.)

All these sites are dated to the 4th-5th centuries BC – the heyday of Scythia. And not without reason, the symbol of Ukrainian archeology became the famous golden pectoral found by Boris Mozolevsky in the Scythian royal barrow of the 4th century BC at Tovsta Mohyla  in 1971. 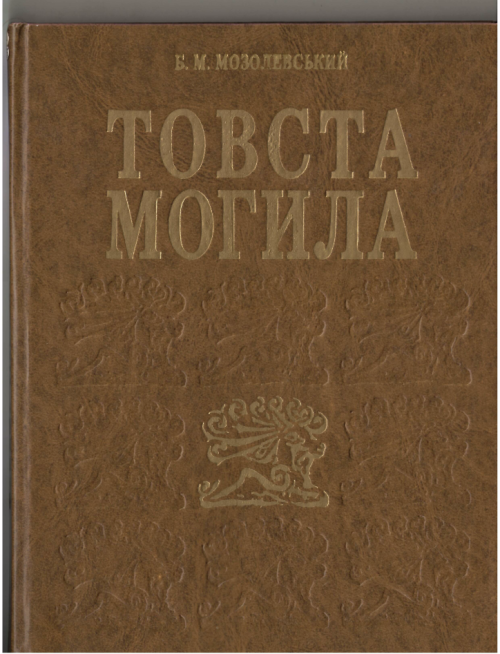 The end of the Scythian steppe culture came in the early 3rd century BC. Under the onslaughts of related but hostile newcomers from the east the Scythian entity, already being weakened by internal problems, disintegrated. The remnants of the Scythians migrated west to the Dniester and Lower Danube. Gradually the Scythians were assimilated by the Sarmatians  and Goths  and by the middle of the 3rd century AD they disappeared as a political and ethnic unit. 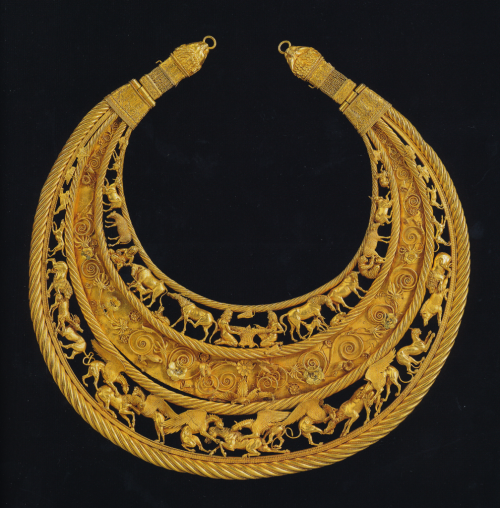 Dr Oleksandr Symonenko, Chief Research Fellow in the Institute of Archaeology of the Ukrainian National Academy of Sciences in Kyiv, Corresponding Member of the Deutsches Archäologisches Institut, Berlin.