Christmas with the Luthers

There is an enduring story that Martin Luther invented the Christmas tree. The usual version is something along the following lines: Luther was walking home close to Christmas and, inspired by the starry sky, brought a small fir tree into the house and decorated it with candles to remind his children of the stars shining over Bethlehem when Christ was born. 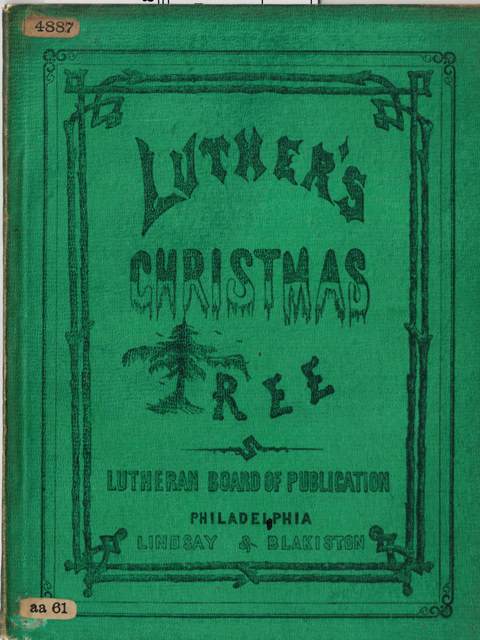 In fact it’s pretty certain that Luther had nothing to do with Christmas trees. There’s no mention of such a thing in his letters or Table Talk, or in biographical accounts by his contemporaries. The popular association seems to go back to an engraving of 1843 by Carl August Schwerdgeburth (below) showing the Luther family gathered round a tree. As described in an earlier post, 19th-century pictures of Luther’s family life often reflected their own times as much as his, and a tree was a definite fixture of a German Christmas by the 1840s – although not in the 16th century. 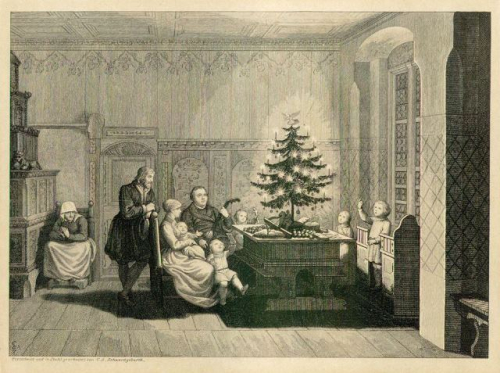 Schwerdgeburth’s picture was widely reproduced and much imitated, and no doubt the growing visual association of Luther with an anachronistic Christmas tree led to the story that he invented the tradition. 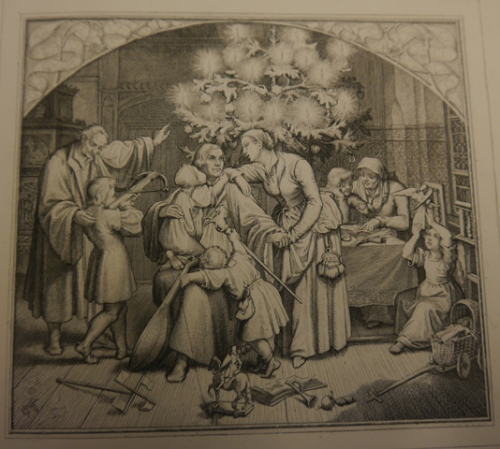 However, Luther did have a hand in another German Christmas tradition: the giving of gifts on Christmas Eve. Although there is some evidence that he and his family continued the established custom of giving small presents on the feast of St Nicholas (6 December), Luther wanted to make the nativity and the infant Jesus the focus of Christmas celebrations. Thus he encouraged making Christmas Eve the principal day for gift-giving and identified the Christkind (Christ-Child) as the gift bearer. Father Christmas (Der Weihnachtsmann) has taken over the role in some German households today, but in others the Christkind still brings the children their presents. (And German children still get gifts from St Nicholas on 6 December as well.) 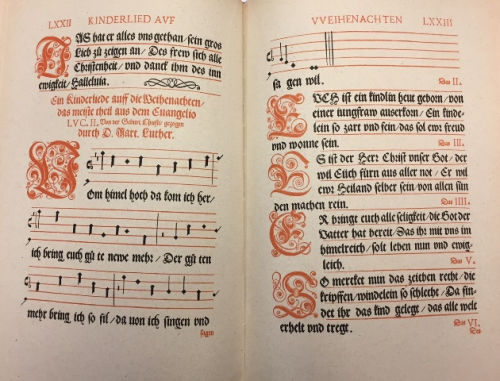 It is said that Luther wrote his Christmas hymn, ‘Vom Himmel hoch da komm ich her’ (‘From heaven above to earth I come’) for a family Christmas Eve celebration in 1535. The song reflects the angel’s message to the shepherds from the nativity story, and according to at least one 19th-century account, it was first performed to the family by a singer dressed as an angel. In the accompanying picture (below) Luther looks oddly fierce and the children rather frightened; I assume this is unintentional, as the text praises Luther as family man, poet and musician. Interestingly, there’s no tree in sight here. 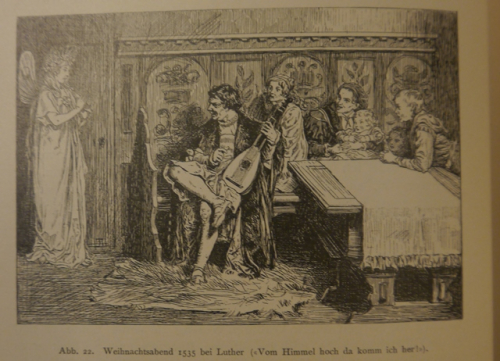 Unlike many German hymns and carols, ‘Vom Himmel hoch…’ has never really caught on in Britain, but Luther may have contributed to a German carol that is still popular here. The macaronic ‘In dulci jubilo’ dates back to the 14th century, but an additional verse about God’s grace to sinners was added in the 16th century and is often ascribed to Luther.

Christmas with the Luthers probably wasn’t quite as 19th-century artists and biographers liked to imagine it, but was clearly a happy time: one of Luther’s students once described him as being ‘very jocund’ on Christmas Eve. We hope that you all will be too, and throughout the season.