50 years ago, in 1967, the Kyiv publishing house Dnipro published a small edition of the novel by the Ukrainian writer Mykhailo Kotsiubynskyi, Tini zabutykh predkiv (‘The Shadows of Forgotten Ancestors’), with illustrations by the outstanding graphic artist Heorhiy Yakutovych. At this time Kotsiubynsky’s work inspired many people – it is worth mentioning the film of the same name by the director Serhii Paradzhanov in which the artistic director was Yakutovych himself. The same ideas were circulating in the artistic milieu of Kyiv, but everyone manifested them in their own way. And if Paradzhanov’s film influenced the future development of contemporary Ukrainian cinematography, the book, illustrated by Yakutovych, became a classic achievement in the development of 20th-century book art. 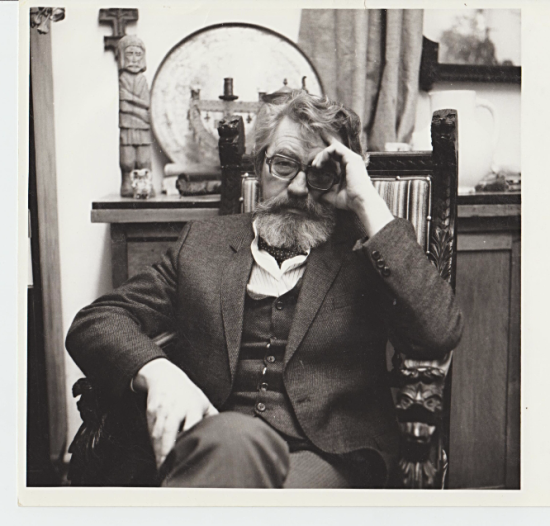 Photo of Yakutovych, from the family archive of Volodymyr Yurchyshyn.

Yakutovych was born in Kyiv on 14 February 1930, into the family of a military officer, which influenced his childhood as the family constantly moved from one place to another – from Moscow to Leningrad, from Estonia to Finland. From 1948 to 1954 he studied in the newly-created Graphics Faculty of the Kyiv State Art Institute, under Illarion Pleshchynskyi and Vasyl' Kasiian. There he also met his future wife Oleksandra Pavlovs'ka. The artist was strongly influenced by his meeting in 1961 with the Russian graphic artist and woodcut illustrator Vladimir Favorsky, whom he considered as his teacher, and who inspired The Shadows of Forgotten Ancestors.

Yakutovych’s work with Kotsiubynsky’s masterpiece started in the early 1950s as his diploma project, when he went to the Carpathians (at this time still a closed military zone), collecting sketches of life among the Hutsuls. Later when assisting with Paradzhanov’s film, he spent nearly a year living in the mountains enriching his experience, which led to the creation of his series of woodcut illustrations to The Shadows of Forgotten Ancestors.

The scheme of the book is exceptionally clear: the artist divided it into four parts, each corresponding to one of the periods in the life of the main character, the Hutsul shepherd Ivan Paliychuk: childhood, youth, adulthood as a farmer, and lonely misfit. These milestones in the story are marked by four illustrations at the beginning of each section, combining different time fragments of the novel (images below). They are complemented by 16 illustrations in the text, each symbolizing a separate idea, making the story by themselves. 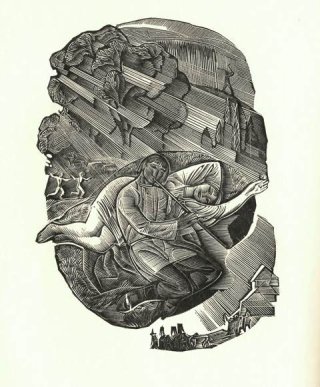 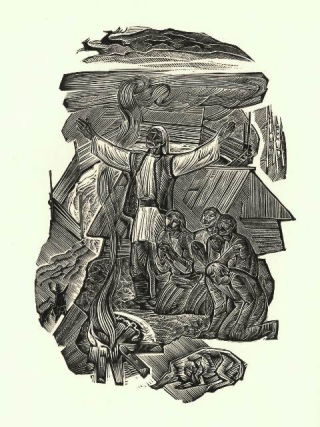 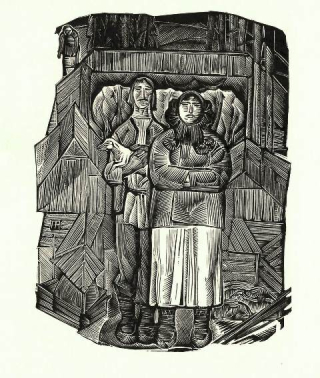 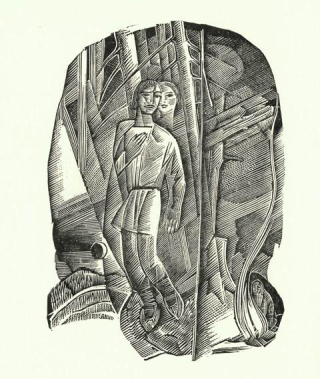 At the same time as The Shadows of Forgotten Ancestors, Yakutovych illustrated a collection of stories by Mariia Pryhara, Kozak Holota (The Cossack Holota), an adaptation for children of the Ukrainian epic stories of the Cossack period. Understanding the nature of these stories, the artist turns to the tradition of Ukrainian folk art, particularly popular prints. 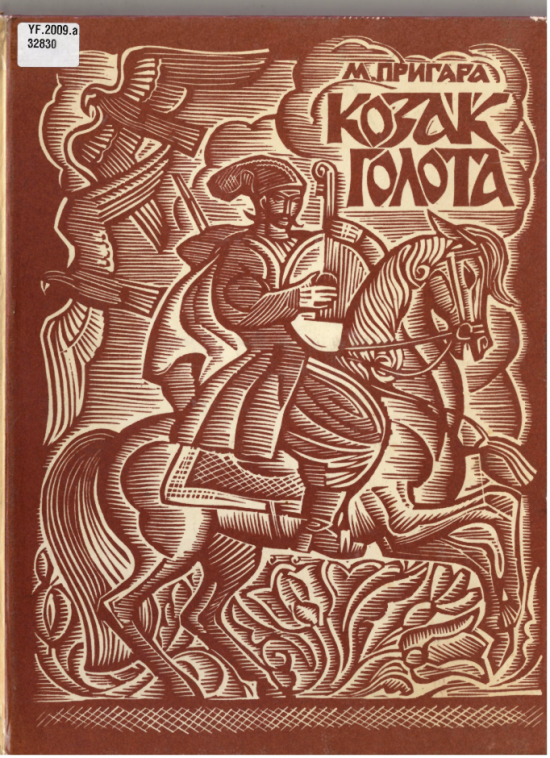 After The Shadows of Forgotten Ancestors, Yakutovych continued his interest in Ukrainian history which can be shown in his series of historical tales – Zakhar Berkut (1974; X.950/31763), Slovo pro Ihoriv pokhid (1982; YA.1996.a.7413) and Povist' mynulykh lit (Chronicle of the Bygone Years; 1982; 805/6102). The last one, created in collaboration with Mykola Pshinka (artistic design) and Volodymyr Yurchyshyn (artistic design and fonts), received the highest award in the All-Union Competition of Book Art, the Ivan Fedorov Diploma. Here all the elements of the design - the illustrations, ornaments, fonts and text composition - create one complete artistic object: the book. 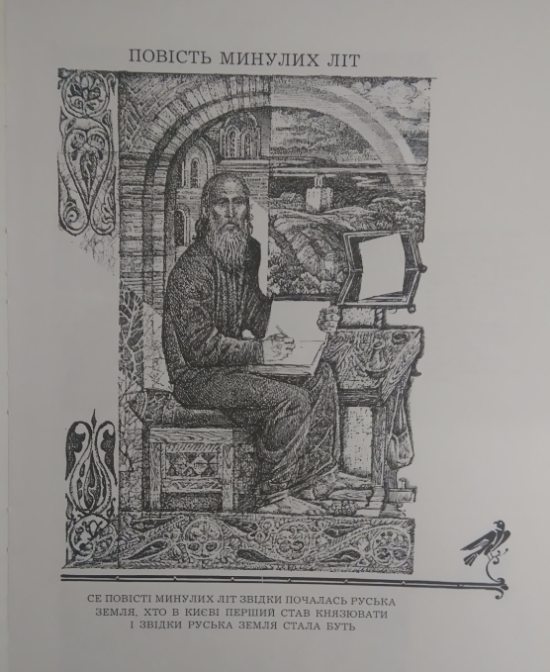 For nearly ten years Yakutovych worked on one of the last of his works, a series of illustrations to Gogol’s novel Vii (1989), where he presented the supernatural nature of Gogol’s work by making them look like delusions, using different perspectives and scales. 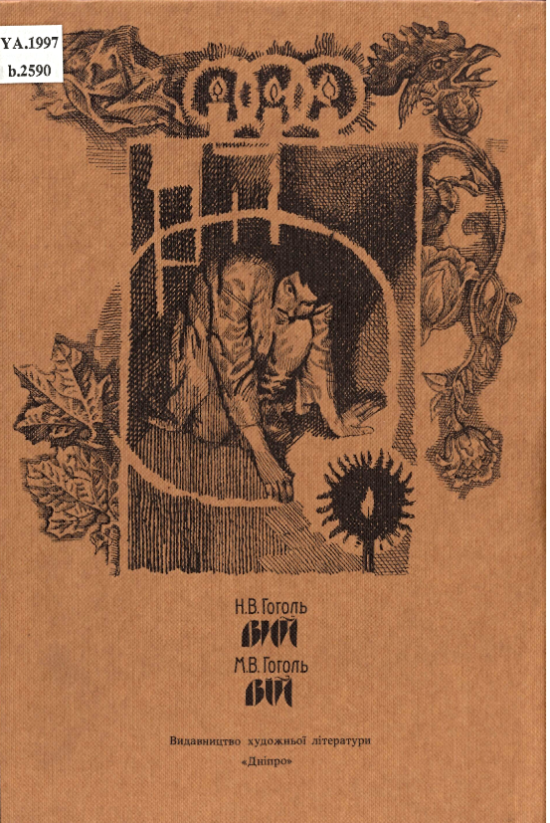 Celebrating the anniversary of The Shadows of Forgotten Ancestors in the spring of 2017, the publishing house Artbook published a new book Like a Shadow, edited by Polina Limina and Pavlo Gudimov, dedicated to the history of the creation of Yakutovych’s woodcuts. It includes numerous artistic works and sketches, archival material, photographs and early studies of  the artist’s work by contemporaries. The last chapter is quite personal, where the artist’s son Serhiy gives one of his last interviews, sharing memories of his father. 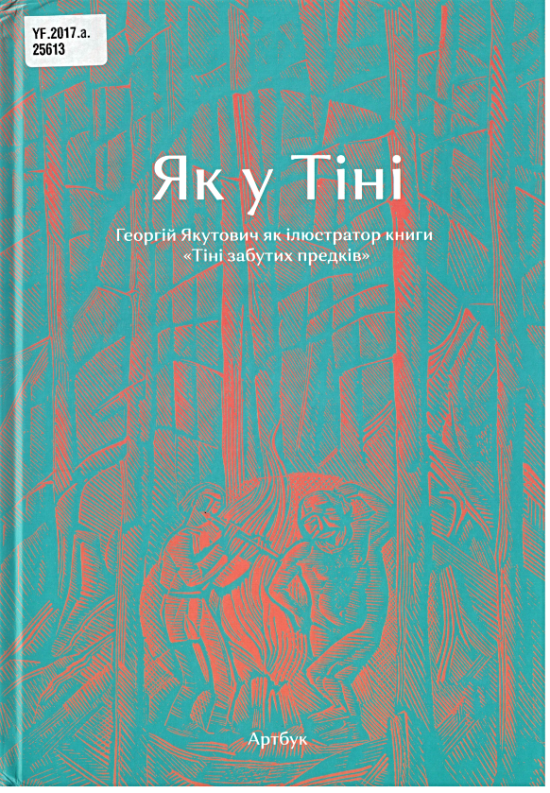 One of the best-known of Ukrainian graphic artists in the second half of the 20th century, awarded many prizes and distinctions, Yakutovych influenced the future principles of book design, and worked in the spheres of graphics and film production. In Ukraine a graphic art exhibition and competition named after him has taken place since 2002. The artist’s sons Serhiy and Dmytro and his grandson Anton followed the same path, dedicating their lives to working in graphic art, painting and film.

Original concept by Polina Limina, editor-in chief of the publishing house Artbook, with the kind editorial assistance of Oksana Yurchyshyn-Smith