In 1525 the Protestant reformer Martin Luther married a former nun, Katharina von Bora. The couple had six children, four of whom survived into adulthood. Their household was a hospitable one: they also took in the orphaned children of relatives,  and regularly offered a home to Luther’s friends, colleagues and students.

It became increasingly common, especially in the 19th century, to depict the Luthers and their family as an ideal of clerical marriage and the Christian home. Illustrations to popular biographies show Luther in the bosom of his family, often at the same time reflecting contemporary mores, as in the examples below. In the first, the furnishings of the house and the dress and attitudes of the figures owe as much to the early 19th century ‘Biedermeier’ period as to the reality of the 15th century, while in the second, from an 1905 publication, a positively Dickensian Luther beams over his brood. 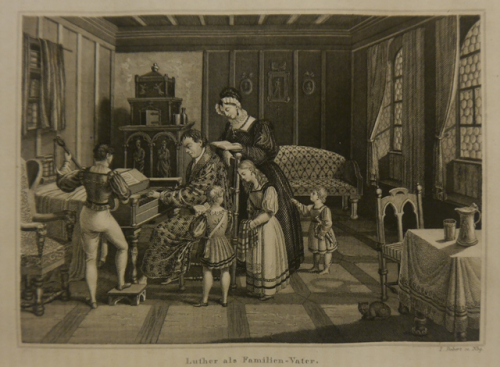 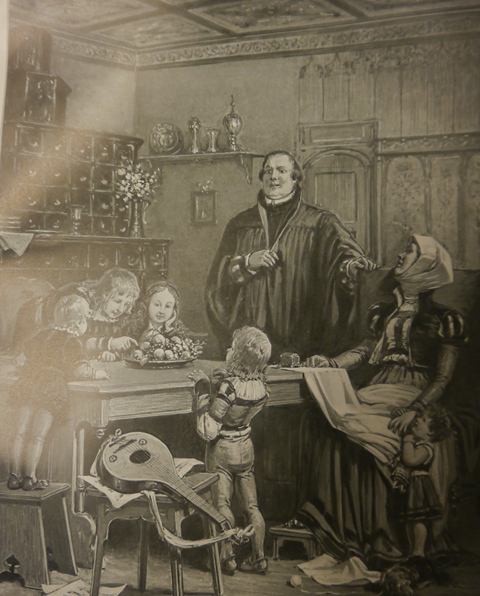 However idealised – or occasionally saccharine – such pictures might be, they do reflect a certain reality. Luther took much pleasure in family life and his letters show that he was an observant, affectionate and proud father. There are touching descriptions of his grief over the deaths of his daughters Elisabeth (in infancy) and Magdalena (aged 13). He was, of course, a man of his times, who believed in the necessity of firm discipline and corporal punishment in child-rearing, but he recognised that the kind of exaggerated beatings he had received as a child for small transgressions, both at home and at school, were counter-productive, and that punishment should be tempered with rewards.

A often-quoted example of Luther’s paternal affection is a letter that he wrote to his eldest son Hans (‘Hänschen’) in 1530 from Coburg. Hans had recently started lessons at home and Luther was pleased to hear that he was working hard. He goes on to describe:

… a pretty and cheerful garden, where there are many children. They wear little golden coats, and gather beautiful apples and pears, cherries and plums under the trees; they sing and run about and are happy. They have lovely ponies, with golden bridles and silver saddles. I asked the owner of the garden whose the children were. And he said, “They are the children who love to pray and to learn and are good.” Then I said, “My dear sir, I also have a son, called Hänschen Luther: could he come into the garden too …?” The man said, “If he loves to pray and to learn and is good, then he too may come into the garden, and Lippus and Jost ; and if they all come together, they can play on fifes, drums and lutes, and all kinds of instruments, and dance, and shoot with little crossbows.” He then showed me a beautiful lawn in the garden, prepared for dancing, where a great many golden fifes and drums and silver crossbows were hanging.

(You can read the original here. ‘Lippus and Jost’ were the sons of Luther’s fellow-reformers Philipp Melanchthon and Justus Jonas.)

The letter’s vision of a ‘children’s paradise’ shows that Luther had a good idea of what might appeal to a little boy, and that he wanted to encourage Hans with kindness rather threats. However, Hans was only four years old, and I can’t help thinking that he would have been too young to understand this delightful vision as a metaphor for the heavenly rewards of learning and piety and that Luther’s good intentions may have backfired. Did the little boy sit down to his lessons every day hoping for the actual reward of a visit to the enchanted garden described in the letter, only to be disappointed by the realities of early modern education and disillusioned by his father’s apparent deception? 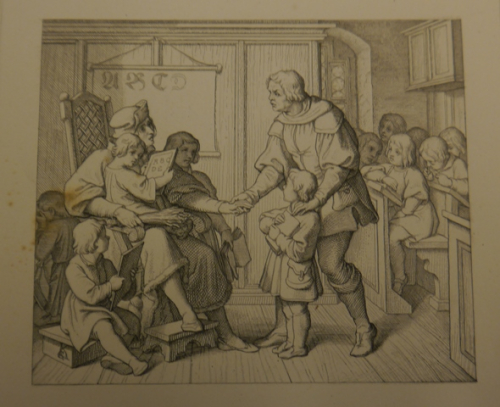 The realities of early modern education? This 19th-century picture by Gustav König imagines Martin Luther being taken to school for the first time by his own father. The teacher holds a switch and a boy who has just been beaten sobs behind the chair. From Heinrich Gelzer and Gustav König, Dr Martin Luther der deutsche Reformator (Hamburg, 1847-51) 4885.f.13.

As Hans grew older he tended to show a lack of application in his studies and lapses in his behaviour that concerned and sometimes angered his father. I wouldn’t for a moment argue that this was all the result of childhood trauma caused by a lack of ponies and golden fifes but perhaps a little bit of iron had entered into his soul when he realised that these things were not literally going to come his way. (In fairness to Luther, however, I should point out that he did bring Hans the very real gift of sweetmeats back from Coburg, which may have made a greater impression than the letter.)

Hans made good in the end; he settled to his studies and went on to become a lawyer – appropriately enough the career that his paternal grandfather and namesake had originally intended for Luther himself. He never had a son of his own, so we don’t know how if he would have used his father’s method of encouraging a little boy to study, pray and be good.