December 18 2017 marks 250 years since birth of Yevgenіy Bolkhovitinov, Metropolitan of Kyiv and Galicia (secular name Evfimii Alekseevich Bolkhovitinov). He was an outstanding personality within the Orthodox Church, a religious historian, author, and explorer of ancient written and archaeological heritage.

He was born into the priest’s family in Voronezh. From 1778 he studied at the Voronezh seminary, and later simultaneously at the Slavic Greek Latin Academy and Moscow University (1784-1788). During these years he published his first literary translations.

Once back in Voronezh after his studies, Bolkhovitinov taught in the seminary, oversaw its library, and served as prefect. A literary group that developed around him founded the first printing house in Voronezh. 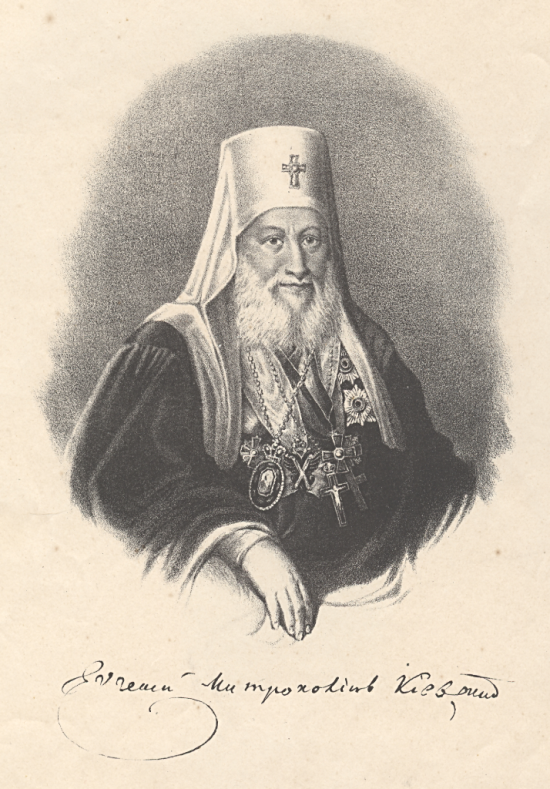 After becoming a widower in 1799, Bolkhovitinov moved to St. Petersburg, where he took his vows under the name Yevgenіy. From 1800-1803 he taught at the Ecclesiastical Academy of St. Petersburg. In 1808 he bacame Bishop of Vologda, in 1813 Bishop of Kaluga, and in 1816 Bishop of Pskov. In 1822 he became Metropolitan of Kyiv.

In all the cities and dioceses where he served he invested a tremendous amount of time and energy into managing church work, resolving daily problems in the diocese, building and restoring churches, and providing oversight and support to religious educational institutions.

However, his activity spread beyond just the duties of his job. In each of his placements, he took great interest in local historical memorials and history of monasteries and churches, he explored local archives and libraries. For more than 30 years he collected material for his dictionary Slovar’ istoricheskii o … pisateliakh Dukhovnago china Greko-Rossiiskoi TSerkvi (Historical Dictionary of Past Clerical Writers in Russia; picture below) – a fundamental work that paved the road for history of literature and remains a valuable resource. Yevgeniy gladly shared his knowledge and collected information with other researchers. Vasily Sopikov admitted that success of his fundamental bibliographical work Opyt rossiskoi bibliografii (St Petersburg, 1813-21; 011908.e.1.) was possible in great part due to Yevgeniy. 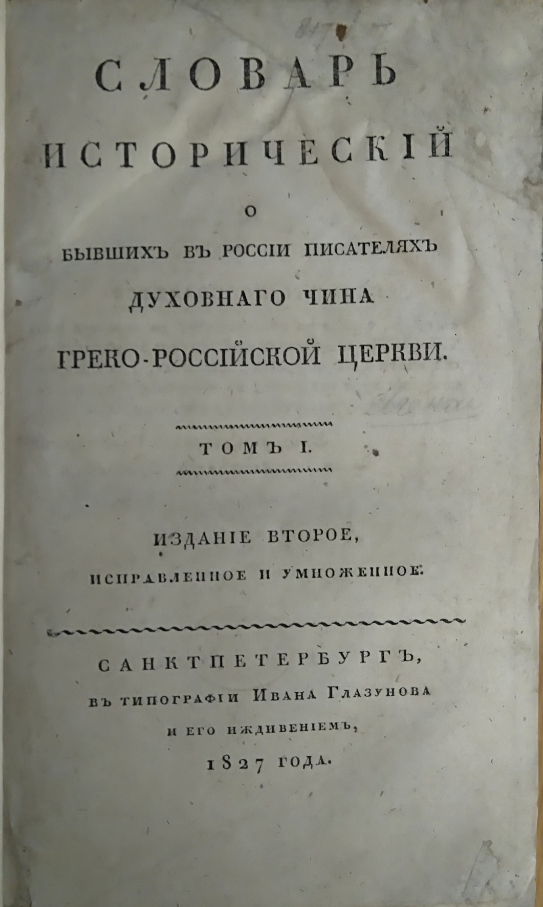 Yevgeny reached the greatest success as enlightener and scholar at the time when he was the Metropolitan of Kyiv. He actively connected with advanced scientists and scholars such Alexander Vostokov, the well-known bibliographer V. G. Anastasevich, patron and collector Count Nikolay Rumyantsev and many others. The British Library holds his correspondence Perepiska Mitropolita Kievskago Evgeniia s …grafom Nikolaem Petrovichem Rumiantsevym i s nekotorymy drugimi sovremennikami, s 1813 po 1825 vkliuchitelno, (Voronezh, 1868-72; 7708.eee.2.) 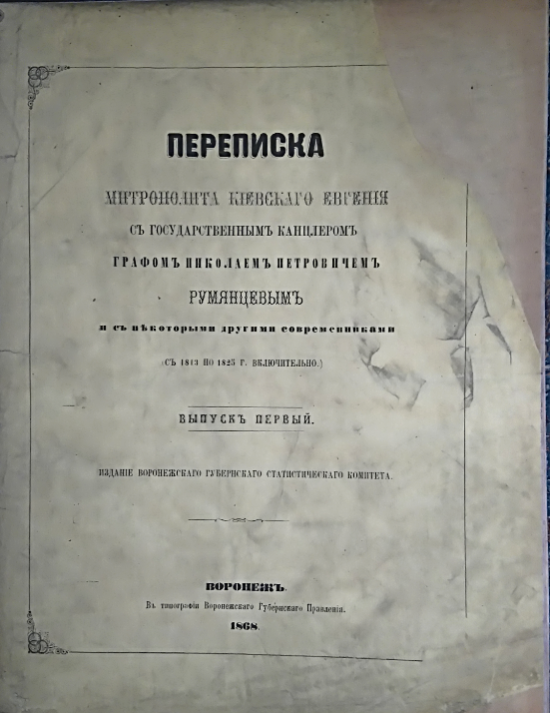 These relationships turned Kyiv into one of the major centre of scholarly and historical activitiy alongside Rumyantsev’s Group - an informal society of historians, philologists, other humanitarian scientists who did their research work under patronage of Count N.P. Rumyantsev (1754 – 1826) - and the Moscow Society of History and Russian Antiquities.

Metropolitan Yevgeniy oversaw the opening of the Kyiv Ecclesiastical Academy Conference, students worked under his supervision to explore historical topics, public thesis presentation took place, as well as Yevgeniy published his own work. This all created a new social and cultural milieu and formed intellectual profile of the city.

Yevgeniy wrote Opisanie Kievo-Sofiiskago sobora i Kievskoi ierarkhii (Kyiv, 1825; 5005.d.4.; title-page and frontispiece below), the first description of history and archaeology of the 11th-century Kyiv Saint Sofia Cathedral, as well as a description of the Kyivan Cave Monastery, Opisanie Kievo-Pecherskoi Lavry (1826). 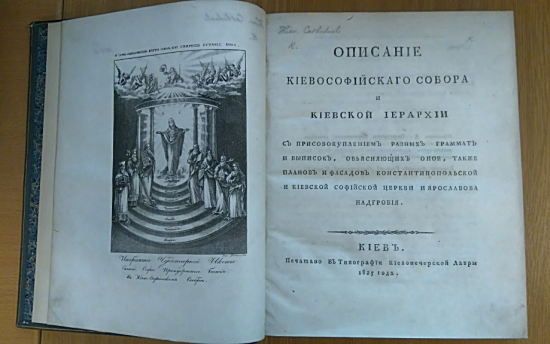 In order to determine the size and appearance of the Desiatynna church Yevgeniy organized the excavation of the church’s foundations in 1823-1824 and published the report detailing the findings in the journal Otechetvennye zapiski (St-Petersburg,1839-84; Mic.F.13.) This excavation project started archaeological investigation of Kyiv. In 1830s a few remains of places mentioned in annals that relate to Kievan Rus were discovered, such as famous Golden Gate. In all these discoveries Metropolitan Yevgeniy served as a consultant. After the foundation of Kyiv University (1834), Yevgeniy’s dream of founding a city archaeological society came true – in 1835 the Provisional Committee For Investigating Antiquities in the City of Kiev (Vremennnyi komitet dlia izyskaniia drevnostei v Kieve) was formed.

The time when Yevgeniy was Metropolitan of Kyiv created a distinctive epoch, it facilitated formation of city’s intellectual space, set historic and archaeological thought in motion, specifically focusing on studying Kyiv. According to Yevgeniy’s testament, his library, comprising tens of thousands of volumes and manuscripts has been gifted to the Kyiv Ecclesiastical Academy and seminary, and to Saint Sophia Cathedral.

Tetiana Ananieva, Research Fellow at the Hrushevsky Institute of Ukrainian Archaeography and Source Studies of the National Academy of Sciences of Ukraine, Kyiv