Mapping the Christmas Flood of 1717

This Christmas saw some pretty wet and windy weather, both in the UK and across the North Sea in the Netherlands, where I spent my Christmas holidays. Foul it may have been, but it was nothing compared to the storm that battered vast swathes of the Northern Netherlands, Northern Germany and Denmark for four days over Christmas in 1717.

I must say, that I, like most of my fellow Dutchmen had never heard of this storm. Yet, it caused more casualties than the big flood of 1953. It was the biggest natural disaster in 400 years.  The Northern Maritime Museum,  located in two beautiful Medieval buildings in the centre of Groningen, is runnning an exhibition on this ‘Midwinterflood’, in collaboration with the Groningen Archives. They are organising a conference about the flood on 20 January.

A prominent place in the exhibition is taken up by images of a map, which is by no means ‘only’ a topographical map, but tells the story of the flood in both cartographic and pictorial images and text. It is beautifully made, but that should not come as a surprise, since it was none other than the master cartographer Johann Baptist Homann who engraved it. 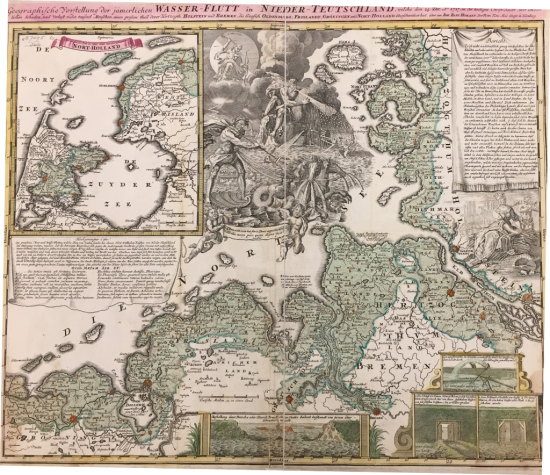 Homann addresses us as ‘reader’ (‘Hochgeneigter Leser!’) instead of ‘viewer’, seemingly emphasising that the map is not just a topographical tool but a text to be read. 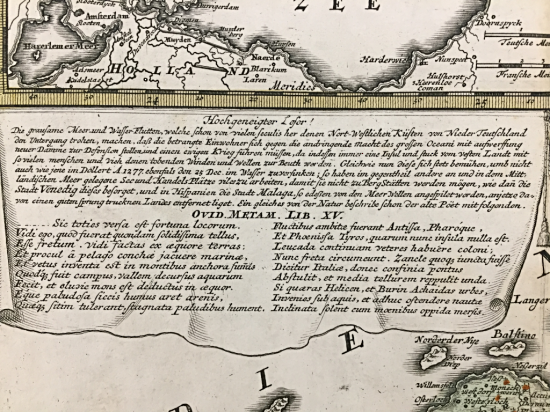 Detail from Homann’s map, with his address to the reader.

The most striking thing about the map is the green colouring which indicates the extent of the reach of the water. It immediately brings home the scale and seriousness of the disaster. At one point the water reached the gates of the city of Groningen, which lies 34 km inland from the coastal town Pieterburen. Estimates are that 14,000 people lost their lives across the whole of the northern Netherlands, Germany (10,000!) and Denmark. Homann gives a figure of 18,140 for casualties in Germany. Let’s hope that modern science is more accurate than he was. 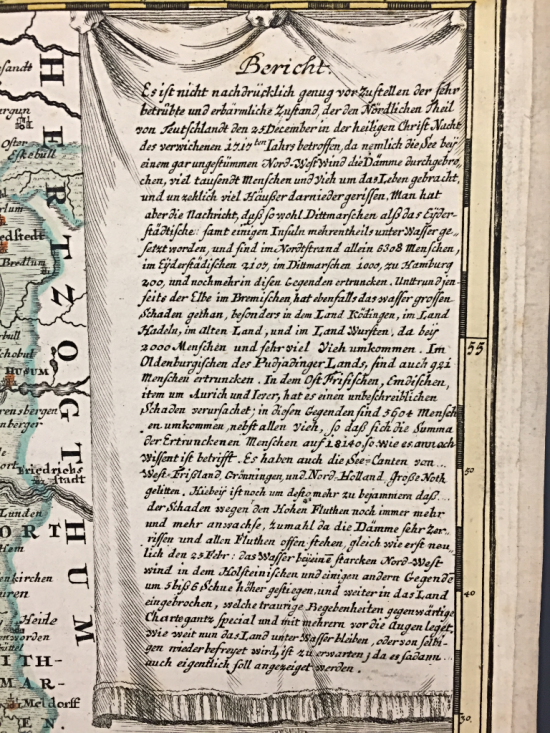 Homann’s account (above) and depiction (below) of the flood 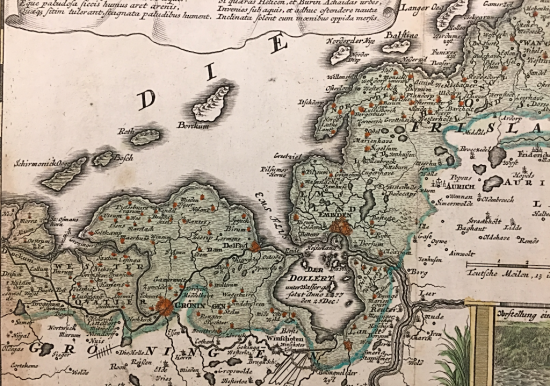 The illustrations within the map, such as the water scoop, sluice and inundated village support the story. The putti holding up the banner with the quote from Ovid’s Metamorphoses are crying, as a sign of the scale of the human tragedy and may-be the feelings of Homann himself. 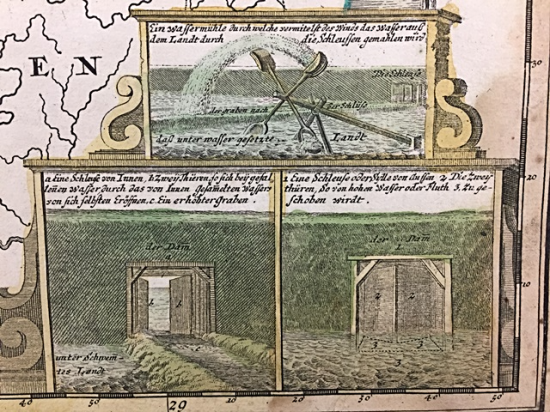 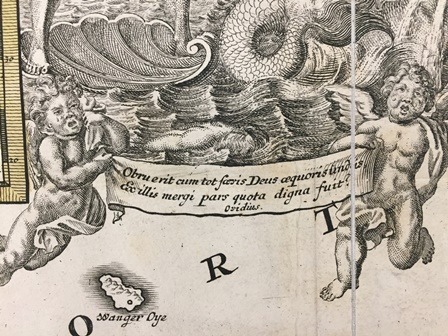 My first thought when I saw this extraordinary map in the exhibition was: “Is there a copy in the British Library?” As soon as I could I went online to check our catalogue and indeed, I found it at the first attempt. I reserved it immediately to be ready for me to study it as soon as I was back at work. I almost could not wait. Fortunately I had the exhibition to keep me entertained. It gives a fascinating account of what happened, how it could happen, the human, material and financial costs and it also highlights the hero of the story Thomas van Seeratt, who had been appointed provincial commissioner only the year before. At first ridiculed when sounding the alarm on the sorry state of the dikes, he was tragically proven right on Christmas night 1717.

Soon after the event pamphlets such as that by Adriaan Spinneker started to appear, telling of horrible ordeals suffered by people trying to save their lives by clinging on to trees, or roof tops, barely clothed, without any drinking water or food, exposed to bitterly cold and wet weather for hours and sometimes days on end, all the while carrying loved ones on their backs or in their arms. In the end some became so exhausted and stiffened by cold that they had to let go of their children. 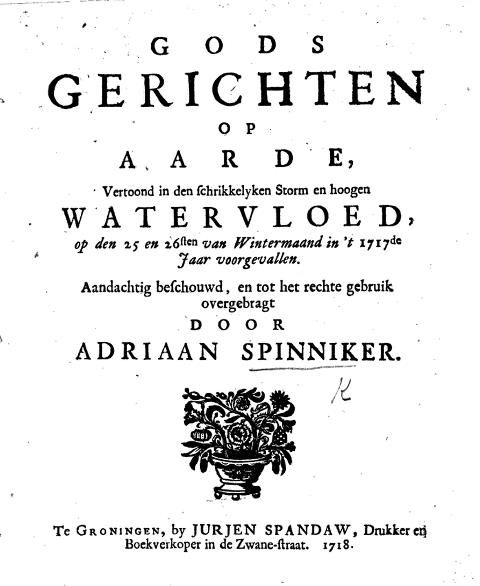 Authorities did initiate a large programme of dike building, based on van Seeratt’s designs, which involved making dikes less steep, so they can absorb the shocks of the waves much better. These days Dutch national authorities and the 22 water boards are responsible for dike maintenance, rather than private landowners.  This is just as well, because without dikes to protect it, the Netherlands would look a bit more like this. 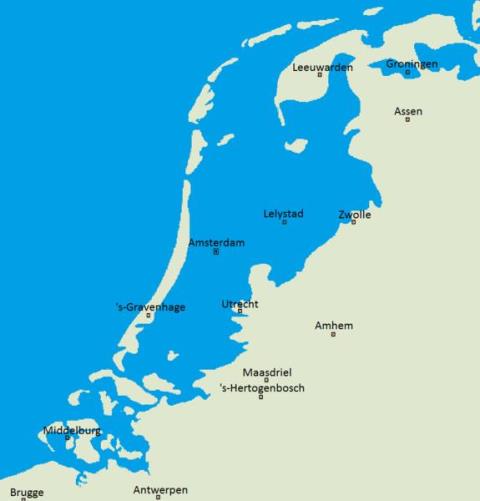 The Netherlands compared to sea level. (Image from Wikimedia Commons)