The Adventures of ‘The Swiss Family Robinson’

Of the comparatively few German-language children’s books that have become enduring classics in the English-speaking world, two are by Swiss authors: Johanna Spyri’s Heidi, and The Swiss Family Robinson by Johann David Wyss, who died 200 years ago this month. 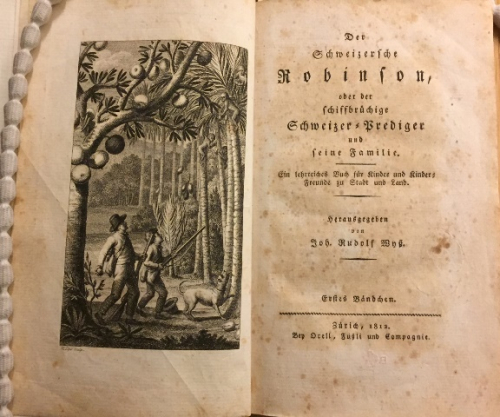 Like many famous children’s books, The Swiss Family Robinson originated as a tale told aloud to real children – Wyss’s four sons. He wanted both to entertain and to inform the boys, and also to depict their different characters (and hint at ways in which these could be improved). Indeed, his own title for the story was ‘Characteristics of my children. In a Robinsonade’. He did not intend the story for publication, but in 1812 one of the now adult sons, Johann Rudolf, edited the manuscript and published it as Der schweizersiche Robinson, oder, Der schiffbrüchige Schweizer-Prediger und seine Familie (‘The Swiss Robinson, or the Shipwrecked Swiss Preacher and his Family’). This was the first of many changes that Johann David’s original work would undergo. 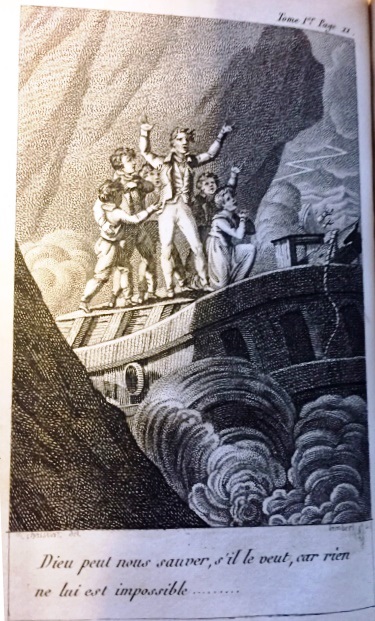 Shipwreck! The family commend themselves to God in the storm. Illustration from the first French translation Le Robinson Suisse (2nd edition; Paris, 1816) 122835.c.21.

The book tells how the shipwrecked family of the title survive and create a new home on a desert island, involving many adventures and discoveries. Wyss describes in great detail how they salvage material from the wreck, build shelters and other amenities, and find (and later cultivate) food, all intended as a lesson in practical skills for young readers. Natural history lessons also have their place, with long discussions and lectures on the flora and fauna of the island, which is surprisingly varied: the place is home to an unlikely international menagerie of animals, including jackals, porcupines, buffalo, ostriches, tigers, kangaroos, walrus and even a duck-billed platypus. Most of these creatures are either domesticated or shot by the family. 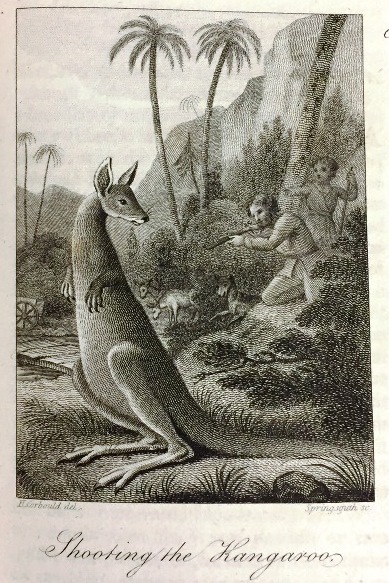 Shooting a kangaroo (clearly based on George Stubbs’s 1772 painting of ‘The Kongouro from New Holland’) from the first English edition The Family Robinson Crusoe (London, 1814) C.117.b.78.

Less exciting and exotic are the lessons in morality and piety. The father in the story frequently reminds his sons to say their prayers, whether of supplication or thanks, and to be honest and hardworking. 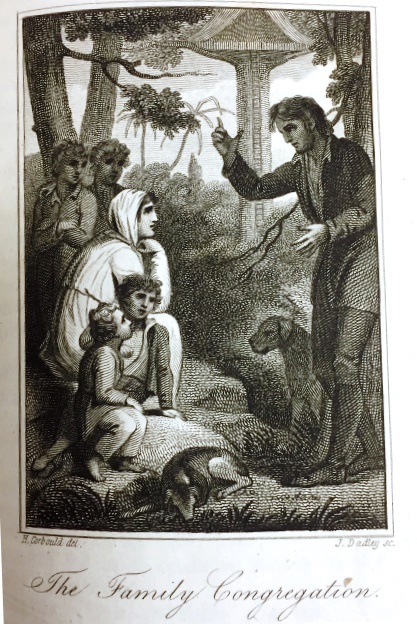 The father leads his family in Sunday worship, from The Family Robinson Crusoe

Despite its didacticism, the story is engaging and some of the passages of dialogue between the boys and their parents – such as a discussion of names for different sites around the island – seem to carry an echo of the way the Wyss boys might indeed have talked and joked together. The book certainly appealed to young readers and enjoyed great success. 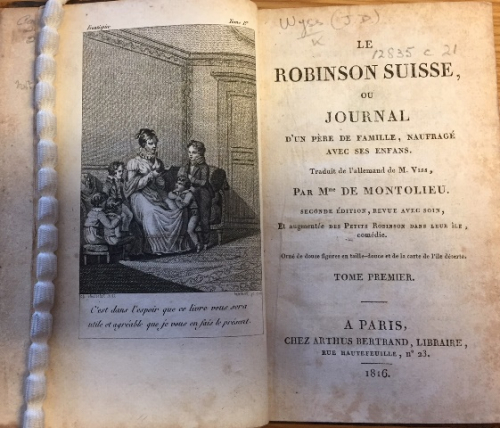 Title-page of  Le Robinson Suisse. The frontispiece shows the translator reading the book to her grandsons and great-nephews, to whom she dedicated the translation.

Translations soon followed and further altered the original tale. The first English and French translations (1814 and 1813 respectively) both made some changes to the sequence of events and chapter numbering, but the French translator, Isabelle de Montolieu, went further still. When, over a decade after the first German edition, a promised continuation had not yet appeared, she wrote her own, based on brief notes provided by Johann Rudolf Wyss and published in 1824. Wyss’s own last two volumes appeared in 1826-7, but Montolieu’s continuation served as a basis for several other translations, including the most successful 19th-century English version, ascribed to the bestselling children’s author W.H.G. Kingston but actually the work of his wife Agnes. 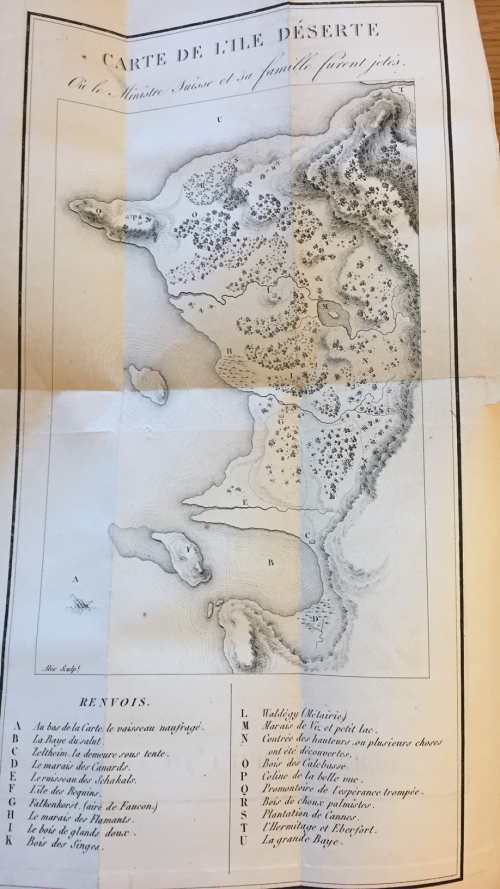 Other changes were made to the book as time went on. Chapters were merged, split or rearranged, new adventures and characters were added, and the conclusion varied in different versions and translations. Names were often changed in translation, with different translators into the same language sometimes using different variants. There have been many retellings and abridgments, picture-book and comic-strip versions, and even a Swiss Family Robinson in Words of One Syllable (London, 1869; 12808.g.20). Modern editions jettison most of the religious and moral lectures, and I suspect that, in the 21st century, the family’s trigger-happy attitude to the animals they encounter may also be played down. 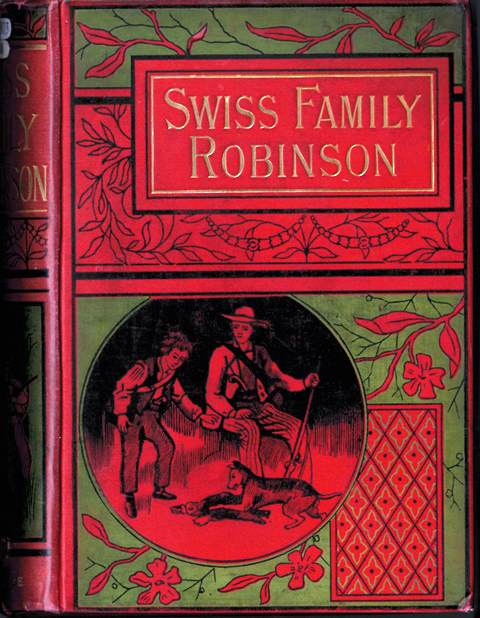 Cinema and TV have also played a role in changing the story. A 1960 Disney film added pirates and a love triangle involving the older boys and a female castaway to the story. A 1980s Japanese animated series had as its main protagonist a newly-invented daughter of the family. In both of these versions Robinson is the family’s actual surname, a false assumption no doubt made by many English readers over the years. Robinson is not, of course, a Swiss surname, and in the original no family name is given (although Montolieu, in a short play appended to her translation, calls them ‘Bonval’). ‘Robinson’ in Wyss’s title simply refers to the fact that the preacher and his family were Crusoe-like castaways.

For most readers –in any language – in the two centuries since in its publication, the Swiss Family Robinson that they encountered has most likely been at several removes from the work of either Johann David or Johann Rudolf Wyss. But, despite all the accretions and alterations, the core of the original tale has survived and continues to appeal to young readers, unlike most other didactic Robinsonades of the period. A tribute, perhaps, to Johann David’s skills as a father and a storyteller.