Three Alphabets of the Belarusian Language

The written culture of Belarus is over 11 centuries old. Many of us correctly associate the Belarusian language with the Cyrillic alphabet. However, many texts, in both Old Belarusian and the modern literary language (1850s onwards) were originally written and published in Latin characters. The existence of these two graphic systems in the Belarusian written tradition reflects the rich and complex cultural influences the country experienced at different periods. Many people may be surprised to learn that the Arabic alphabet was also used for writing in Belarusian. For that we should be grateful to the Tatars of the Grand Duchy of Lithuania.

For centuries, Cyrillic script (kirylica) was the most commonly used graphic system of the Old Belarusian language both for religious and secular literature. The oldest Belarusian book known to us is the Turaŭ [Turov] Gospel. Its only fragment, consisting of ten sheets, was discovered in 1865 in Turaŭ, a town in the south of contemporary Belarus. It is preserved in the Library of the Lithuanian Academy of Sciences  in Vilnius. The manuscript is written in the Church Slavonic language, in uncial script (ustav) - the oldest type of Cyrillic writing.

Starting from the 14th century, a more economical half-uncial script was widely used in East Slavonic manuscripts. When the first Belarusian printer, Francysk Skaryna, established his press in the early 16th century, he chose a font based on handwritten half-uncial Cyrillic script.

All three versions (1529, 1566 and 1588) of the Statutes of the Grand Duchy of Lithuania were written in Cyrillic too. There is no academic consensus regarding their language. Most Belarusian scholars call it Old Belarusian, but others refer to it as Ruthenian or Chancery Slavonic. In any case, the texts of the Statutes became important precursors of the modern Belarusian language. Unlike the first two Statutes, the version of 1588 was printed; a Cyrillic font imitating an italic script (skoropis) of that time was used. This script was used for civil publications, while religious books continued to be printed in a more elaborate half-uncial script. 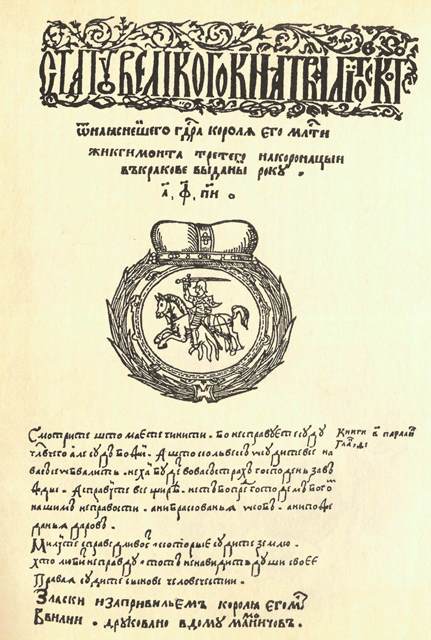 The organic development of the Cyrillic form of the Belarusian language was interrupted by the increased use of the Polish language in the Grand Duchy of Lithuania in the 17th-18th centuries. Polish was replaced by Russian in official use after the Grand Duchy of Lithuania and Kingdom of Poland were partitioned by their stronger neighbours at the end of the 18th century.

A civil script, grazhdanka, developed for the Russian alphabet under Tsar Peter the Great’s supervision, was adopted by newspaper and book publishers after publishing in Belarusian became legal in the Russian Empire at the beginning of the 20th century. After a short period of experimentation, the Belarusian alphabet settled into its current form. It is very close to the Russian and Ukrainian alphabets, but has its own particularities, e.g. the letter ў (ŭ) which recently acquired a mascot status for the whole Belarusian language.

A monument celebrating the character ў in Polack, the oldest Belarusian city and the birthplace of the first Belarusian printer, Francysk Skaryna. (Photo by Pasacern7 from Wikimedia Commons CC BY-SA 4.0)

The Latin script (lacinka) was used widely in Belarus for writing in Latin and Polish. From the 16th century, we also have examples of Belarusian texts, usually written in Latin script using the Polish alphabet.

19th-century publications in Belarusian are dominated by lacinka: the folklorist Jan Čačot, the author Jan Barščeŭski, the poet and publisher Alexander Rypinski, the first major Belarusian playwright Vincent Dunin-Marcinkievič, and the first major national poet, Francišak Bahuševič – all wrote and published their works in the Latin script. In 1862-63, the first – illegal then – Belarusian newspaper, Mužyckaja praŭda, was published by Kastuś Kalinoŭski, also using Latin script. 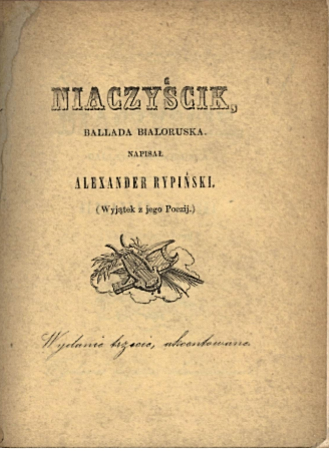 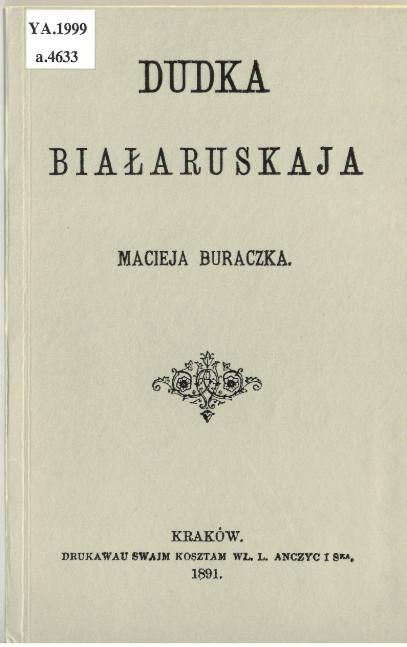 The earliest Belarusian newspapers and books published legally under the Russian Empire used both Cyrillic and Latin scripts, which they referred to as “Russian and Polish characters”. Cyrillic was used to address the Orthodox Christian population and the Latin alphabet – for Roman Catholics. The Naša Niva weekly, the main voice of the Belarusian national revival, dropped its lacinka version for the kirylica one due to costs. 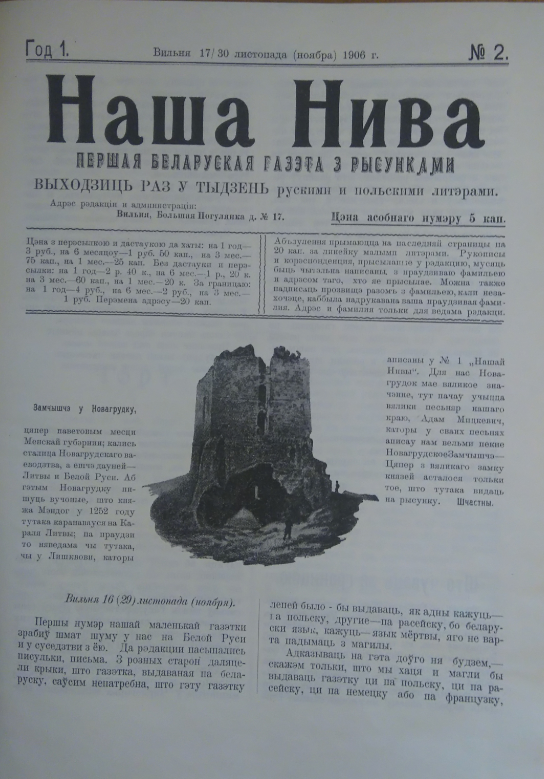 The Latin script continued to be widely used in the western part of Belarus, which from 1919-1939 was under Polish rule. Here, the outstanding linguist Branislaŭ Taraškievič proposed a version of the Belarusian Latin alphabet which broke away from the earlier conventions; for example, instead of digraphs common in Polish (cz, sz), letters with diacritics (č, š) were introduced. This version was quickly and widely adopted by publishers in western Belarus.

In Soviet Belarus, the possibility of adopting the Latin script was discussed only once, during the Academic Conference for Reform of the Belarusian Grammar and Alphabet in 1926. The conference agreed that such a change would be the best solution, but premature at that time. Three years later, the Bolsheviks described such views as sabotage and tearing Belarusian culture away from that of Russia. Mass purges of the Belarusian intelligentsia followed soon after.

A slightly modified version of Branislaŭ Taraškievič’s lacinka has recently been adopted by the Belarusian government for transliterating Belarusian geographic names into Latin script and recommended for use by the United Nations.

From the 14th century, Tatars from Crimea, the Volga region and the Caucasus settled in the Grand Duchy of Lithuania – some were invited to join the Duchy’s army, while others were refugees or prisoners of war. Many of their settlements survived until very recently in contemporary Belarus, and even now the small town of Iŭje is primarily known for its Tatar community. In literature, they are referred to as Lipka Tatars.

The Tatars adopted the vernaculars of the peoples they lived among, and used them in their own manuscripts – translations of and commentaries on the Quran, prayer books and books of religious instruction. Belarusian dialects predominate in Lipka Tatar manuscripts, particularly in the oldest known to us, dating from the 17th-18th centuries. The Tatars preserved the Arabic script for writing and recorded phonetics of the language they – and people among whom they lived – spoke. These manuscripts are an important source about the development of the Belarusian language: many characteristics of the contemporary Belarusian language can be seen in Lipka Tatar writings from centuries ago.

George Meredith Owens/Alexander Nadson, ‘'The Byelorussian Tartars and their Writings'’, The Journal of Byelorussian Studies, 2/2 (1970), pp. 141-176.

Shirin Akiner, ‘The Vocabulary of a Byelorussian Tatar Kitab in the British Museum’, The Journal of Byelorussian Studies, 3/1 (1973), pp. 55-84.