J.R.R. Tolkien had a ‘secret vice’, which ceased to be secret from the moment he let the cat out of the bag in an essay of the same title, which has been reprinted many times.

Tolkien’s vice was inventing languages. He was introduced to this pleasure at an early age by his cousins Mary and Marjorie Incledon, who taught him the language Animalic which they had created themselves. He quotes a fragment of it in his 1936 essay ‘The Monsters and the Critics’: “Dog nightingale woodpecker forty = You are an ass”.

When the elder of the two girls lost interest, Tolkien, who was already learning Latin and French at school, collaborated with her younger sister to create a second and more sophisticated language called Nevbosh or ‘New Nonsense’. “I was a member of the Nevbosh-speaking world,” Tolkien proudly recalls. He even quotes part of a poem in the language, which begins with the lines: Dar fys ma vel gom co palt ‘hoc / Pys go iskili far maino woc? (There was an old man who said ‘how / can I possibly carry my cow?’)

During this time Tolkien also learnt Esperanto. Esperanto was still a new language, only five years older than Tolkien himself. (The first book of Esperanto  was published in 1887, while Tolkien was born in 1892.) When he was 17 years old he used Esperanto in a manuscript with the title The Book of the Foxrook, consisting of 16 pages in a a secret code using rune-like phonetic symbols and ideograms. The name of the code was Privata Kodo Skaŭta – ‘Private Scout Code’ (The correct word for ‘scout’ in modern Esperanto is skolta.)

A teenager with a passion for learning and creating languages could hardly fail to discover Esperanto, although the criteria which Tolkien followed for his own constructed languages were quite different from those which inspired Esperanto’s creator Zamenhof. The grammar of Esperanto aims to be as simple as possible, in contrast to the complex grammars of Tolkien’s languages. Tolkien was aiming to create word forms which would be aesthetically pleasing, and harmonize with their meanings. In accordance with these principles he invented at least 15 languages in the course of his lifetime. He also gave them different dialects and background histories showing how they had evolved over time,  and imagined the peoples who spoke them His grammars were very elaborate, making use of his linguistic knowledge of Finnish, Welsh, Ancient Greek and other languages. It might be difficult to learn to speak his languages fluently – but ease of learning was never his primary object in creating them. 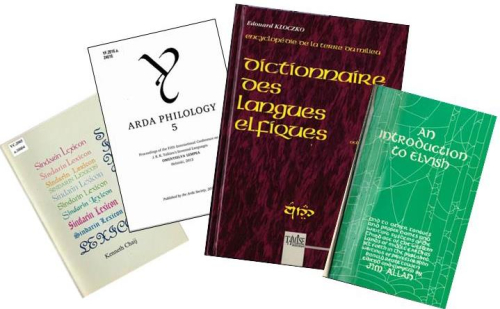 In the first period up to 1930 he worked on Primitive Quendian, from which the entire family of Elvish languages evolved. He followed this up with Common Eldarin, Quenya and Goldorin, which later became Noldorin. To these languages he later added Telerin, Ilkorin, Doriathrin and Avarin.

In the final stage, Noldorin evolved into Sindarin, which along with Quenya is one of his best known languages. Sindarin makes use of the same phonological system as Welsh, which was one of Tolkien’s favourite languages. The grammar is also inspired by Welsh, and the result is notably complex. For example some nouns form the plural with an ending (usually -in), e.g. Drû, pl. Drúin, ‘wild men’. Others do so through vowel change, e.g. golodh and gelydh, ‘lore master, sage.. Still others use some combination of the two, and a few do not change in the plural: Belair, ‘Beleriandic-Elf/Elves’ is singular and plural.

Compare this with Esperanto, which has only one plural ending for nouns, with no exceptions. Of course, the aim of Esperanto is that it should be easy to learn for speakers of all languages.

In spite of this, Tolkien recognized the poetic qualities of Esperanto, stating in ‘A Secret Vice’: “Also I particularly like Esperanto, not least because it is the creation ultimately of one man, not a philologist, and is therefore something like a ‘human language bereft of the inconveniences due to too many successive cooks[...].”

At the phonological level, too, Tolkien’s languages stand in complete contrast to the simplicity of Esperanto. Sindarin is based on Welsh, but with elements of Old English and Old Icelandic, resulting in a rich abundance of vowels and consonants. Esperanto’s phonological system on the other hand is closer to that of Modern Hebrew, which consists of a simplified version of the phonology of European languages. 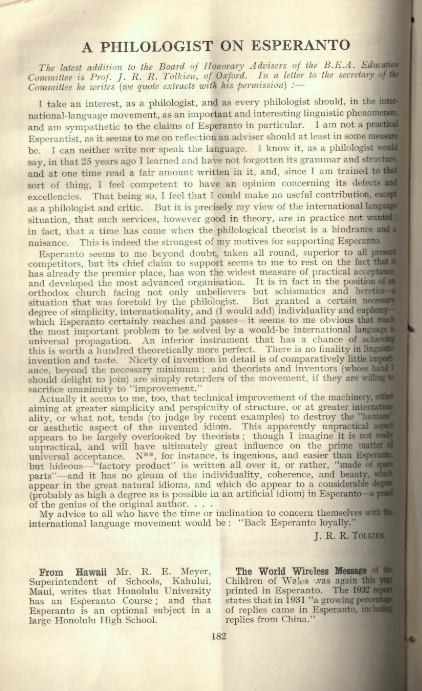 In his letter of acceptance, Tolkien wrote that Esperanto was “in the position of an orthodox church facing not only unbelievers but schismatics and heretics.” The letter concludes with the well-known sentence: “My advice to all who have the time or inclination to concern themselves with the international language movement would be: ‘Back Esperanto loyally.’”

In 1933 he was one of the patrons of the British Esperanto Congress in Oxford, and signed a declaration about the educational value of Esperanto in schools. 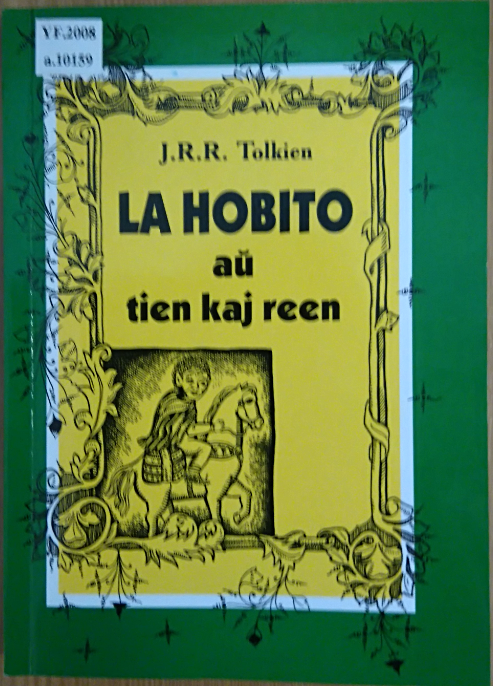 Tolkien’s writings show that for him one of the most important qualities of invented languages was beauty of form. Sindarin achieves that ideal, possessing both educational and aesthetic value. Remembering his support for Esperanto, Esperanto speakers owe it to him to declare, “Ĝuu Sindarin plene” - Enjoy Sindarin to the full.