Two Murders, a Suicide and an Anglo-German Newspaperman

In the course of my research on German printers and publishers in 19th-century London it can be hard to discover how long an individual was at a business address, let alone any more personal details of their lives and backgrounds. But searching for information about Johann Lachmann von Gamsenfels, sometime printer of the German-language Londoner Journal (1878-91), I discovered an unexpected and tragic story.

On 15 August 1889 Gamsenfels took lodgings in Stratford-on-Avon, accompanied by a woman and a four-year-old girl. They appeared a devoted and happy family, and enjoyed visiting the local sights, but on the following Monday morning the landlady heard gunshots from their room. The police were called and forced open the locked door to reveal the woman and child lying on the bed and Gamsenfels on the floor, all three shot through the left temple. Gamsenfels had apparently murdered his wife and daughter while they slept and then killed himself. 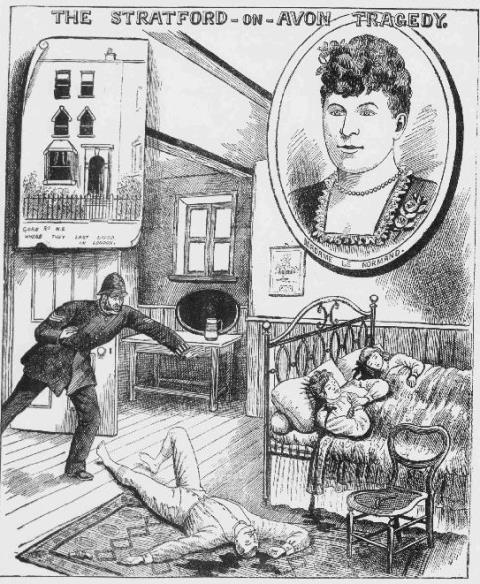 The discovery of the bodies as depicted in The Illustrated Police News of 31 August 1889, via the British Newspaper Archive

Such a ghastly event was bound to arouse press interest and there was no shortage of lurid coverage, especially when it was found that the murdered woman was not Gamsenfels’s wife but his mistress. The couple had been living together for some years as if married, while Gamsenfels continued to support and occasionally visit his legal wife Rosanna and their son. Rosanna said at the inquest that she had found compromising letters to Gamsenfels from a woman five years previously and had confronted them both, but claimed to have had no knowledge of her husband’s continued infidelity and to have accepted his explanation of long absences from home as business related.

One thing that struck me in all this was that Gamsenfels was described in the newspaper reports as editor – and sometimes founder – of the Londoner Journal, although the issues of the paper which I have examined mention him only as its printer. Even in this capacity his name disappears after July 1884, as do large-scale advertisements for his printing business. This must have been around the time that Rosanna discovered his infidelity, and indeed when his mistress became pregnant with their daughter, and I can’t help speculating that his disappearance from the public face of the paper is related to these events. 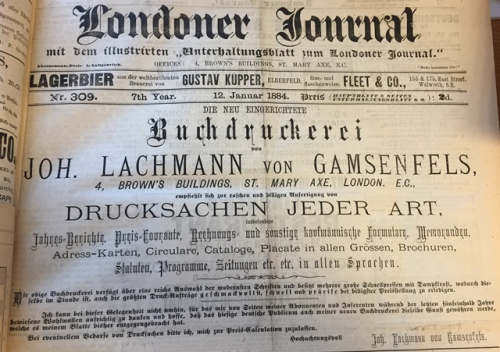 Masthead of the Londoner Journal (12 January 1884; NEWS14598) with an advertisement for Gamsenfels’s printing business

Did the Londoner Journal’s staff agree to turn a blind eye to Gamsenfels’s adultery if he withdrew his name from the enterprise? Were they perhaps sympathetic to his situation and willing to give him a nominal role as editor in order to help him support two households? I say ‘nominal’ because by the time of the murder he and his mistress were also touring with a stage act (as ‘Herr Mozart and Mme Lenormand’), which sits oddly with editing a newspaper full time. Yet if his colleagues were in any way complicit in Gamsenfels’s double life or allowing him to carry out less than a full-time role, they gave no hint of it in their report of his death. There he is described as ‘our editor for many years’ and ‘a diligent worker, jovial colleague and good friend’. The writer states that Gamsenfels and his wife were estranged – something Rosanna seems to have played down in her comments to the inquest – but implies no prior knowledge of the mistress and illegitimate child. So my speculations must remain just that. 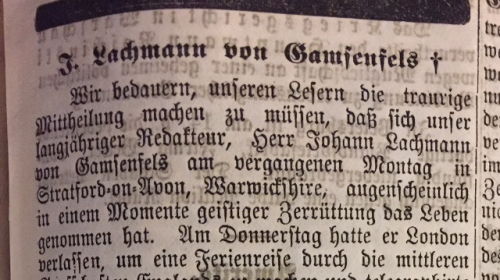 Gamsenfels’s motive for the murder-suicide was equally impossible to prove. At the inquest it was assumed that severe financial difficulties must have led him to such a desperate act and that his state of mind could not be ascertained, although the Londoner Journal claimed that ‘sufficient resources were always available to him,’ and describes the crime as being carried out  ‘apparently in a moment of mental disturbance.’ The inquest judge  (quoted in the Banbury Guardian of 5 September 1889) took a more moralising tone: ‘it was the natural result of an illicit and shameful connection … a vicious life ending in a disgraceful manner.’

But the saddest mystery in this strange case is the identity of the dead woman. Many reports identify her only by her stage name Mme Lenormand. Later she was tentatively identified as Caroline Monthey, the woman whose letters Rosanna Gamsenfels had discovered in 1884, but Rosanna herself said she could not be certain of this. Whoever she was, both she and the daughter she had with Gamsenfels, the victims of his crime, were buried anonymously, with no family or friends to mourn them.