Arians in the age of the Polish Reformation

In the 16th century the Polish-Lithuanian Commonwealth was a multi-ethnic, multi-religious and multi-lingual country and was renowned for its religious tolerance. It provided safety for religious refugees fleeing from prosecution in their own countries. Although Poland was predominantly a Roman Catholic country it quickly absorbed the new religious ideas and a Protestant movement was steadily growing. German citizens were followers of Lutheranism while native Poles adopted Calvinism.

Calvinism resonated well with the Polish nobility because of the egalitarian structure of the Calvinist Church. Furthermore, Jan Łaski, the leading Polish reformer, significantly contributed to the spread of Calvinism in Poland, which reached its zenith in the middle of the 16th century. However, 1562 marked the division of the Calvinist Church with the formation of the most radical group called Polish Brethren, also known as Christians, Arians, Antitrinitarians or Socinians. As a result of the split the Minor Reformed Church was created attracting the most outstanding theologians. 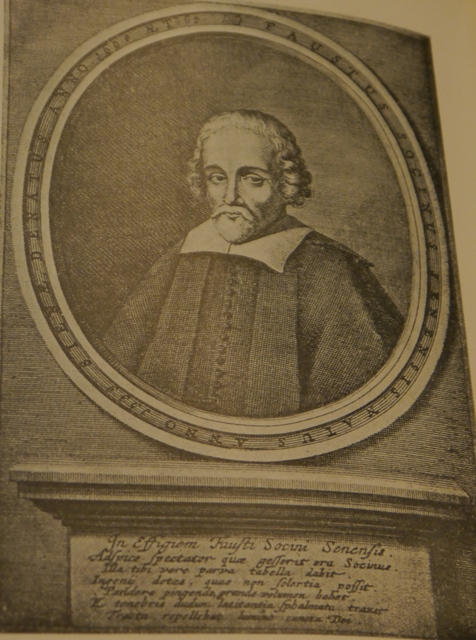 Among them was Faustus Socinus, an Italian refugee who arrived in Poland in 1579. He united the group ideologically but never formally belonged to the Church for his objection to water baptism. However, under his influence the Arians rejected the doctrine of the Trinity, infant baptism, the divinity of Christ and the doctrine of original sin. 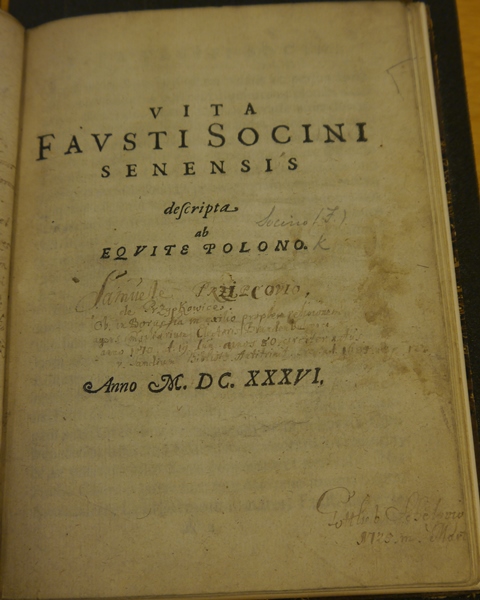 The Warsaw Confederation of 1573 granted religious freedom to Roman Catholics, Lutherans, Calvinists and Bohemian Brethren, but not to the Arians. In addition, the latter were strongly opposed by both Catholic and Calvinist clergy. In Cracow the Arians were prone to attacks by Catholic mobs at the instigation of the clergy. Taking advantage of the tolerance promoted by the Polish kings the Arians left the unfriendly city and moved to the provincial town of  Raków, some 100 km away from Cracow.  The town became a religious and intellectual centre of the dissidents. The famous Racovian Academy, established in 1602, provided excellent education not only for fellow believers but also for Catholics and Protestants. Religion along with other subjects such as foreign languages, history, law, economics, mathematics, medicine and gymnastics were on the curriculum. 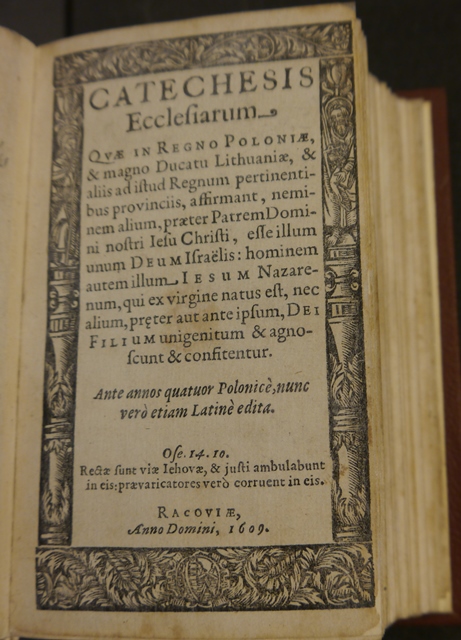 Title page of Catechesis ecclesiarum (Raków, 1609) 3506.a.2 Known as the Racovian catechism, it includes the Socinian doctrine and is dedicated to King James I.

Arian publishing became to flourish when two printing presses transferred from Cracow to Raków. Numerous works in Latin, Polish and German were issued in the presses of Aleksy Rodecki and his son-in-law Sebastian Sternacki. The publications included Arian religious books and lay literature as well as some Calvinist prints. Soon Raków was well known in Western Europe as a printing centre and books with the Latinised form of imprint ‘Racoviae’ were in high demand. Arian religious literature was mainly of polemical character and consisted of theological tracts, catechisms and disputes with their antagonists. The most prolific authors, in addition to Socinus, were Hieronim Moskorzewski, Johannes Crellius, and Valentin Schmalz. 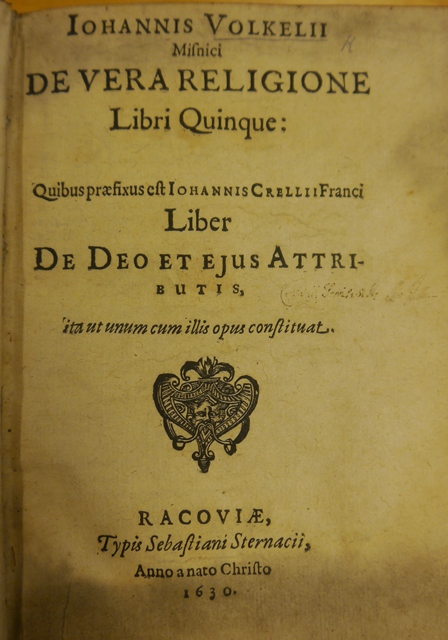 Title page of Joannes Volkelius, De vera religione (Raków, 1630) 4225.cc.31 A full account of the Arian doctrine, and the most important Arianwork alongside the catechism

A period of prosperity for the Polish Brethren ended in 1638 with the closure of the Academy and the confiscation of the printing press. Subsequently, the Arians were expelled from Poland by order of the Sejm (Polish Parliament) in 1658. They moved to the Netherlands and established their publishing centre in Amsterdam with the prominent series Bibliotheca Fratrum Polonorum, the collection of works of the Polish Brethren. Although small in numbers the Arians made a significant impact on political thought in Poland as well as philosophical thought in Western Europe.

Over 240 works are recorded with the Racoviae/Raków imprint of which the British Library holds 72 titles.

Stanisław Kot, Socinianism in Poland: the social and political ideas of the Polish Antitrinitarians in the sixteenth and seventeen centuries (Boston, 1957) 4696.de.23

Posted by Olga Kerziouk at 2:06 PM