The current British Library exhibition Harry Potter, a History of Magic  features a pack of divination cards produced in the mid-18th century, which include a variety of characters ranging from Proserpina to Copernicus and Dr Faustus to Merlin, the magician and prophet of the British.

Merlin first appeared alongside King Arthur in Latin sources, in particular the Vita Merlini and the Historia Regum Britanniae by the 12th-century writer and chronicler Geoffrey of Monmouth. The French Roman de Merlin, written around 1200, which draws on the Historia, considerably develops the story of Merlin. Born as an anti-Christ, the son of a devil, Merlin is gifted with supernatural powers, including shape-shifting. However, his gift of prophecy is of divine inspiration, and despite his troubling origins, Merlin chooses to serve the kings of Britain for the accomplishment of the divine plan. 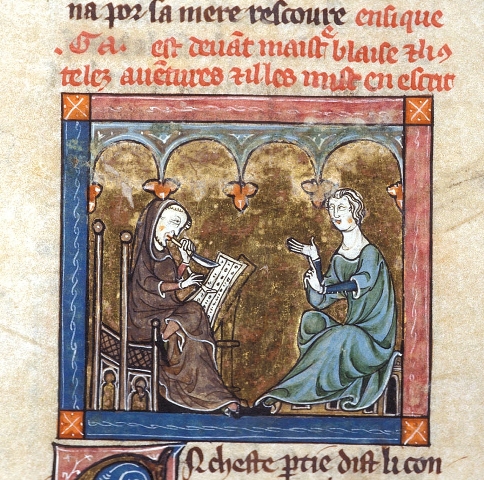 The British Library collections hold many important manuscripts of the French prose Merlin tradition, including the extensively illuminated 14th-century BL Add. 10292-94,  a complete set of the Lancelot-Grail cycle  or BL Add. 38117, another illustrated manuscript produced in Northern France which holds the Post-Vulgate version of Merlin’s Sequel. 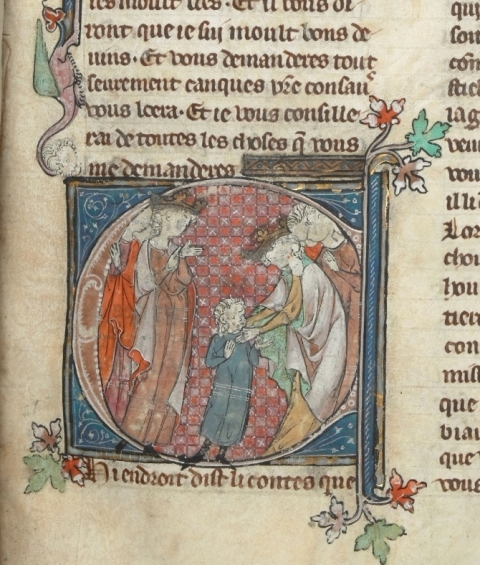 Much less known are the illuminations in Antoine Vérard’s 1498 printed edition on vellum of the Livre de Merlin. The first and second volume, illustrated with woodcuts, hold the prose Merlin and its Sequel, and the third holds Merlin’s Prophecies. The later is a French prose text attributed to ‘Master Richard of Ireland’ and written by a Franciscan friar in Venice in the last third of the 13th century. It mixes romance material and political or polemical prophecies in an Italian context. 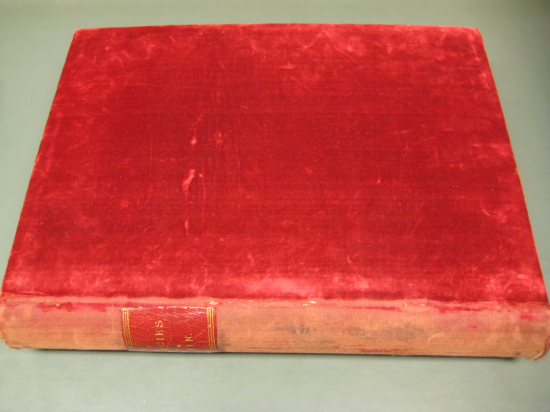 Antoine Vérard was a prolific Parisian publisher in the late 15th and early 16th century who edited many French texts, including mediaeval romances of chivalry like Lancelot or Tristan. Vérard is well known for the production of deluxe copies printed on vellum and illuminated for royal and aristocratic patrons such as King Charles VIII of France. After the death of Caxton,  he became the main provider of French printed books for the developing library of Henry VII of England. This is the origin of the British Library’s exceptional collection of Vérard’s editions on vellum, including the 1498 illuminated Livre de Merlin, in three parts, bound in red velvet (C.22.c.6-8). 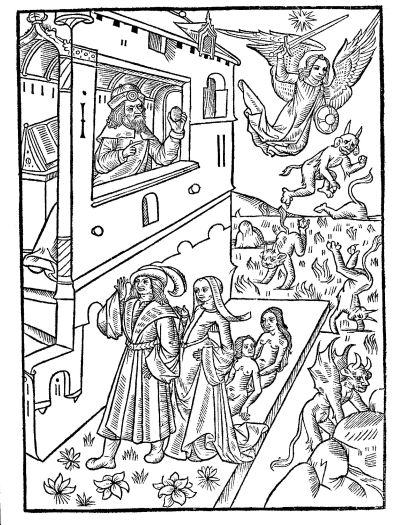 In the paper copies, the illustration of the first and second part of the 1498 Merlin consists of woodcuts re-used from editions of other texts such as Ovid’s Metamorphoses for the frontispiece, Jacques Millet’s Destruction de Troye la Grant or the epic Les Quatre fils Aymon: the images are not specifically adapted to Merlin. 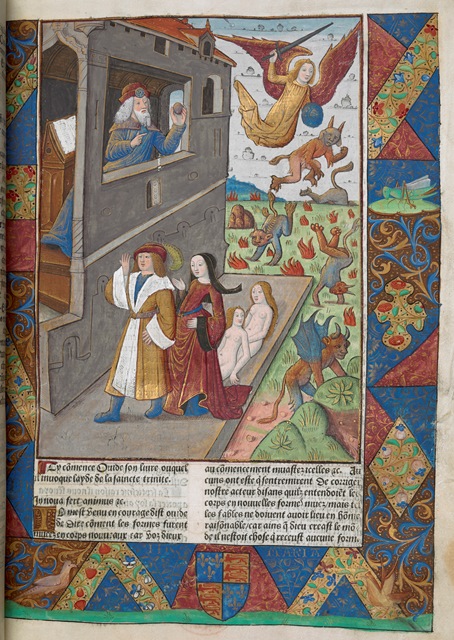 However, in the copies of Merlin on vellum, the miniatures created in the workshop of the Master of Jacques de Besançon,  though often rather generic, are designed for a closer relationship to the narrative. This customisation appears in the opening illustration which displays the conception of Merlin. Inside a room, a horned devil with animal traits appears in bed with a naked woman and places his hand on her body in a possessing gesture. The background features another aspect of the demonic persecution: winged devils massacre the herds of Merlin’s family. 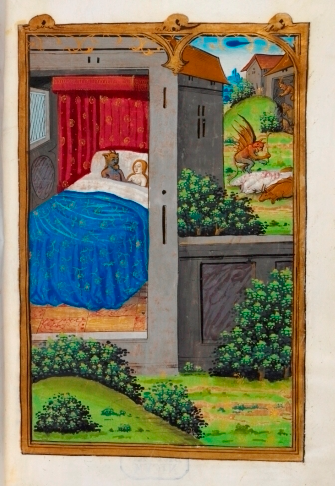 The conception of Merlin, frontispiece from Vérard’s 1498 vellum edition of  Merlin (C.22.c.6).

Merlin features in another illumination in the second volume, when in a side-story he goes to Rome in the shape of a stag. There, he interprets the dream of the emperor Julius Caesar (!) who is both betrayed by his lustful wife and faithfully served by a maiden in disguise (who he eventually marries). The miniature shows Merlin bounding happily through the forests towards the walls of the city. 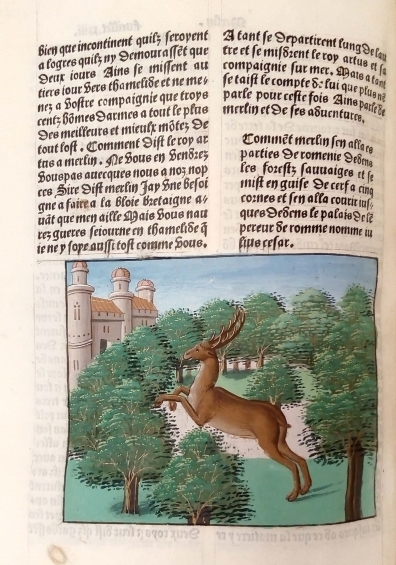 Interestingly for a work which bears his name, this is the only miniature (out of 22 in the two illuminated volumes) representing the character of Merlin. The illuminations do not depict recurrent scenes from the manuscript tradition like Merlin dictating his story to the hermit Blaise or leading Arthur’s troops on the battlefield. The other images display King Arthur or his nephews led by Gawain, and the different battles they fight against the Saxons or rebelled British barons. 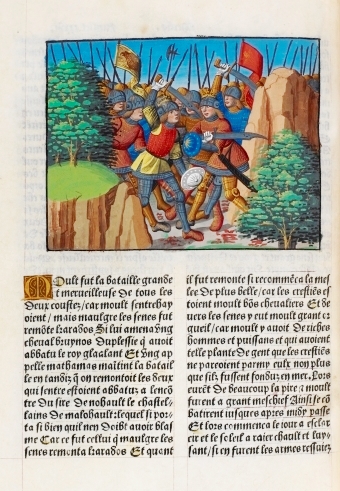 This is in line with the text of Merlin’s Sequel, which presents Merlin on the side of Arthur, but also focuses heavily on the heroic deeds of the young king who stands in a duel against the giant Saxon king Rion. Although Arthur is victorious and chases his opponent, the miniature emphasises the size and aggressiveness of Rion. 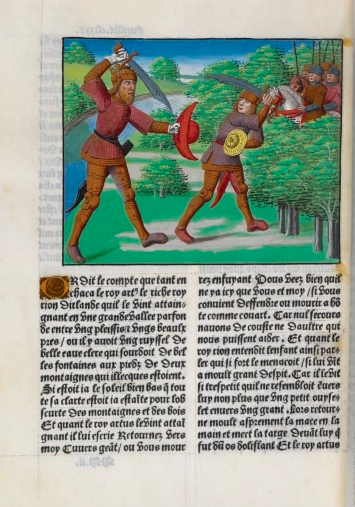 In the story, Arthur appears in a completely positive light, engaged in a courteous and reciprocal love relationship with Guinevere. A miniature shows the celebration of their betrothal. Two squires bring dishes and drinks to the couple at the ceremonial banquet table. In the romance of Merlin, nothing foreshadows, in the early days of Arthur's reign, the adulterous love of Guinevere and (the as yet unborn) Lancelot. 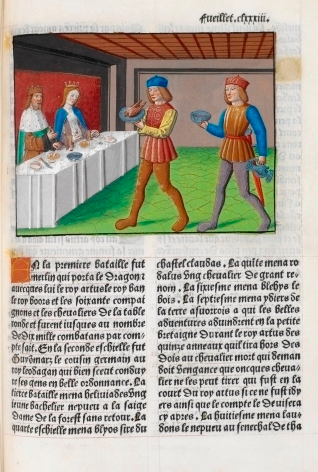 Vérard’s 1493 La Bible des poetes, Methamorphoze, along with other BL incunabula and manuscripts, will be on display in Bruges from  1 March - 3 June 2018 at the exhibition Haute Lecture by Colard Mansion