The first grammar of modern Ukrainian: 200 years ago

“The year 1818 […] turned out to be crucial for Ukrainian national development”, says prominent Ukrainian historian Serhiy Plokhy in his book The Cossack Myth: History and Nationhood in the Age of Empires (Cambridge, 2012, p.353; YC.2012.a.16183). And the first important book amongst three “major literary works” of this year quoted by him is the first grammar of the modern Ukrainian language. Published in St Petersburg in 1818 with the title Grammatika malorossiĭskago nariechiia... (The Grammar of the Little Russian dialect), it was the first book which described the basic phonetics and morphology of the Ukrainian language of the time. The British Library’s copy is now digitised. 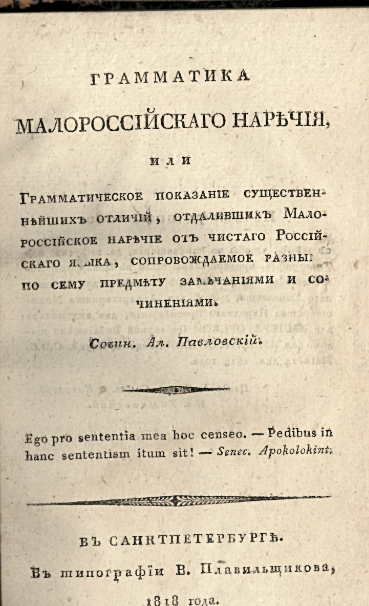 Not much is known about its author, Oleksiy (Aleksey) Pavlovich Pavlovsky (1773-1822?). He was born in the Ukrainian-Russian borderland (now the village of Sosnivka, Sumy Region in modern Ukraine), and after studies in Kyiv moved to St Petersburg where he continued his education at the Teachers’ Seminary. He spent almost 30 years working on the grammar (it was ready by 1805, but published only years later) and was the first to use phonetic principles in describing the contemporary spoken Ukrainian language.

In 1822 Pavlovsky published a brochure called Pribavlenie k Grammatikie malorossiiskago nariechiia (Additions to Grammar of the Little Russian dialect) as an answer to the review of his first book by prince Nikolai Tsertelev  in the influential Russian journal Syn Otechestva in 1818 (PP.4840 and Mic.B.994). This 34-page brochure is also digitised. 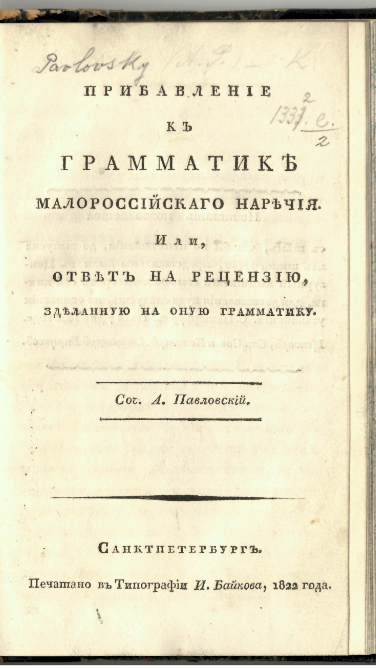 “The author’s attitude toward the Ukrainian language was ambivalent, for although he wished to refine it, he still regarded it as a dialect of Russian”, notes Orest Subtelny in Ukraine: A History (Toronto, 1994, p.230; YA.1995.b.7319). “But Pavlovsky’s achievement, like that of Ivan Voitsekhovych, who in 1823 compiled a small dictionary of Ukrainian, was significant”, he continues. Modern linguists agree about the importance of this first grammar. The short Ukrainian dictionary with Russian translations (pp. 24-78) still evokes a lot of interest. 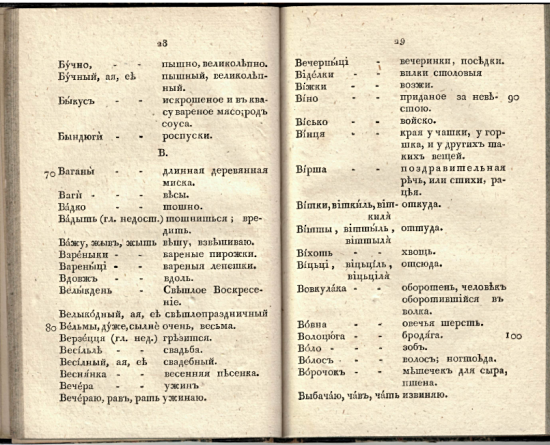 The book of 1818 gives also Ukrainian proverbs with their Russian equivalents and a few examples of spoken Ukrainian language. 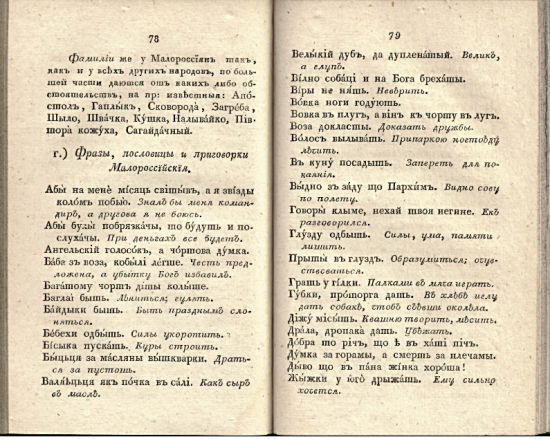 The Ukrainian language had a very difficult time in the 19th century. Two infamous tsarist ukazes in the second part of the century – the Valuev Circular of 1863 and Ems Ukaz  - prohibited the use of the Ukrainian language in print. Yet it survived the persecutions of the tsarist regime and later the limitations on its use during Soviet times. As we are celebrating International Mother Language Day today we pay our tribute to the first grammarians of all languages, especially of those which were prohibited and persecuted.

The battle for Ukrainian: a comparative perspective, edited by Michael S. Flier and Andrea Graziosi. (Cambridge, Massachusetts, [2017]) On order.

Article about the Ukrainian language from online Encyclopedia of Ukraine